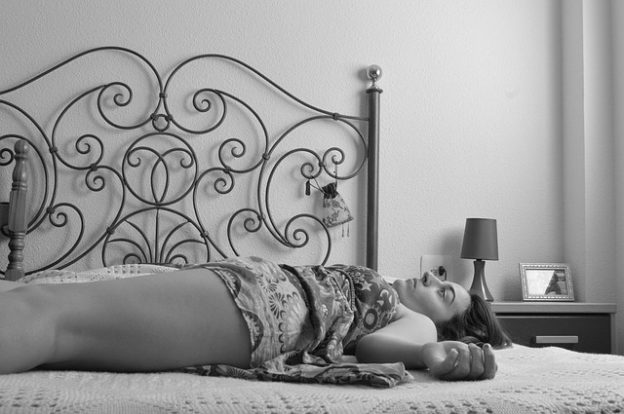 The human sexual response, as proposed by Masters and Johnson, consists of four stages:

However, this model lacks the concept of desire, which was added in Kaplan’s Triphasic model:

Basson (2001) recognized that the female sexual response was non-linear and was more complex with additional factors such as intimacy.

Considering this complexity, the female sexual response, in addition to the genital organs and internal pelvic structures (labia, vagina, ovaries, etc.) also involves the central nervous system and the spine.

The hippocampus, hypothalamus, limbic system, and medial preoptic area are particularly implicated. Indeed, a number of neurotransmitters partake in the female sexual response, such as:

When the clitoris is stimulated signals are transmitted to the spinal cord via the pudendal nerve. When the vagina is stimulated signals are transmitted via the pelvic nerve as well as the pudendal and hypogastric nerves. The primary mediator of the female sexual response is the spinal cord reflex system, which is under the inhibitory control of the brainstem, especially the nucleus paragigantocellularis, which lies in the ventral medulla.

Theoretically, vaginal blood flow can be an indicator of a woman’s sexual arousal. However, in practice the association between the two is weak. This means that women are less sensitive to the genital blood flow changes than men or that they value external stimuli (more than men do) in their assessment of sexual arousal.

DSM- 5 also grouped sexual pain syndromes into one under the term genito-pelvic pain/penetration disorder, because of their highly comorbid and overlapping nature that often made them difficult to distinguish.

Finally, the diagnosis of sexual aversion disorder has been removed because it was rarely used and there was hardly any research done related to the disease in order to present considerable evidence of the disorder. The orgasmic disorder remains as it is.

Female sexual interest/arousal disorder is observed in 8­–9 % among women below the age of 44, and it increases with age. Orgasmic disorder can occur in 10–42 % of women. There is considerable variation in terms of age, culture, etc.

Female sexual function can be affected by numerous factors, direct or indirect. All of the following conditions can influence a woman’s sexual response or motivation:

Physical illnesses that have been implicated in the etiology of female sexual disorders include:

Estrogen deficiency (which may cause vaginal dryness) menopause or premature ovarian failure may lead to various sexual complaints in women. Other conditions that can lead to sexual dysfunction directly or indirectly include amenorrhea, bulimia, and postpartum state.

A woman on medications or chemo- or radiotherapy can also experience sexual disorders. The most common drugs implicated in this are the following:

As evidenced by Basson’s non-linear model of the female sexual response, emotional states are an integral part of a healthy sexual response in women. Consequently, the following can have an adverse effect on a woman’s sexual function:

The diagnostic criteria laid down in the American Psychiatric Association (2013). Diagnostic and statistical manual of mental disorders (DSM 5) are listed below. Note that in all disorders, the minimum symptom duration is 6 months. The symptoms should cause significant clinical distress to the individual, and they should not be explained by any medical or nonsexual mental condition or substance use. All these disorders can be classified, based on the age of onset, as lifelong or acquired.

The patient shows the following:

The patient should show at least three of the following:

Persistent or recurrent difficulties with one (or more) of the following:

Ultrasonography of the pelvis (especially transvaginal ultrasonography) can be helpful in ruling out any underlying structural abnormality.

Depending on the problem and the approach, the therapy may include a demonstration of vaginal dilatation. Individual cognitive-behavioral therapy aims to resolve underlying individual problems, such as anxiety, which is commonly believed to affect sexual functioning.

Physical therapy, which can be

Pharmacotherapy, which, so far, only includes one drug for female sexual disorders (in terms of desire, arousal, and orgasm) that has been approved by the FDA. It is called flibanserin (as 100 mg bedtime dose), and it has been approved for ‘acquired, generalized hypoactive sexual desire disorder in premenopausal women’.

Flibanserin is a 5-HT 1A receptor agonist and 5-HT 2A receptor antagonist. It boosts sexual drive. It has several side effects, the most notable being severe hypotension and syncope if consumed along with alcohol.

The FDA has approved conjugated estrogens and ospemifene for dyspareunia, which can indirectly play a role in hypoactive sexual desire disorder. Tibolone and phosphodiesterase inhibitors such as sildenafil may be used, but are not approved by the FDA.