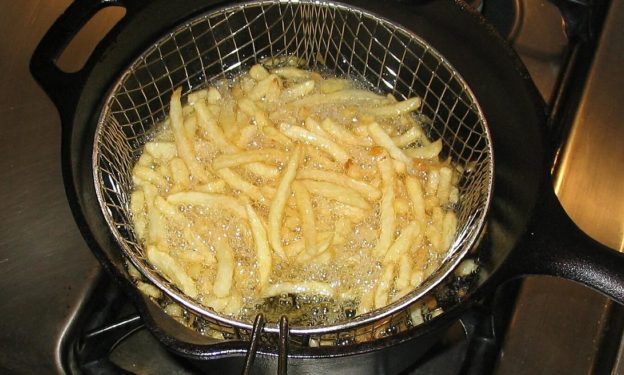 Image: “Fries or chips cooking in oil in a chip-pan.” by Hayford Peirce – Own work. License: CC BY-SA 3.0

Fats and oils are the most common forms of lipids. Their main roles are to provide energy, insulate the body and facilitate the transport of fat-soluble vitamins. Fat is a natural lipid material that is normally solid at room temperature. Oils are similar to fats except that they are generally liquid at room temperature.

These two materials are integral parts of the human diet. They are normally used as a shortening agent in food processing. It normally provides lubrication in some food products, and may also give structure to baked materials such as cakes and doughnuts. Oils are also used for frying different food products. Because of the high heat transfer properties of the oil, it is normally used to produce foods that are crisp and firm.

Aside from its function as a shortening agent, oil also contributes a great amount in terms of the taste of the food. When food products are fried, certain oxidation reactions occur producing a complex set of possible flavors. Olive oil, for example, is a good oil to use for gourmet food products and in pasta and salad dressing. Coconut and palm oil, on the other hand, are very good for frying.

The last main important purpose of fats and oil is that because of their dense nature, they have easily stored sources of calories. Also, because of their non-polar nature, they can be used to transport various fat-soluble vitamins such as vitamins A, D, and E. In the human body, lipids also play a big role in the synthesis of lipid hormones. Different polyunsaturated fatty acids are needed by the body to produce prostaglandins.

Structure of fats and oils

Fats and oils are generally called triglycerides or triacylglycerols. The general structure of a triglyceride is composed of three fatty acids units joined to glycerol and trihydroxy alcohol.

Lipid metabolism can be divided into two major types. One of these is lipogenesis, which involves the synthesis of lipids and fatty acid oxidation in which energy is produced when fatty acids are metabolized. The metabolism of lipids is closely related to the metabolic processes for carbohydrates. This is because there are times when carbohydrates are metabolized, sometimes forming fats.

Triacylglycerols are transported in body fluids by molecules called lipoproteins. The general configuration of a lipoprotein involves having the hydrophobic region inside the core of the sphere, while the superficial layer is composed of the hydrophilic regions.

At different parts of the digestive tract, metabolism of triacylglycerols may occur. The mechanism of metabolism is facilitated by a group of enzymes called lipases. Lipases catalyze the hydrolysis of the ester bond of the triacylglycerol.

Hormones control the activity of hormone-sensitive lipase. An example of this is the increase in lipase activity when an individual suffers from stress. The stress triggers a release of the hormones adrenaline/noradrenaline.

The hormone attaches itself to a receptor which eventually leads to the processing of inactive lipases to convert them to active ones. Active lipases separate the triacylglycerol into glycerol and free fatty acids. The fatty acids produced are taken up from the blood plasma by tissues that require nutrients.

On the other hand, glycerol, since it cannot be utilized in adipocytes, serves as a substrate for gluconeogenesis in the liver.

Finally, the dihydroxyacetone phosphate readily isomerizes to form the D-glyceraldehyde-3-phosphate.

To be able to synthesize triacylglycerol back, a glycerol-3-phosphate can be processed by first reacting it with a fatty acid in the presence of an acyltransferase and in the expense of a FAD molecule. Addition of one fatty acid leads to the production of a lysophosphatidic molecule. The process can be repeated to add another fatty acid to glycerol, forming a phosphatidic acid.

The next step is to remove the phosphate group using phosphatase. The product for this step is a diacylglycerol. Another fatty acid may then esterify with the last OH group of the diacylglycerol to produce the triacylglycerol.

Fatty acids metabolism involves a catabolic process that generates energy and an anabolic process that creates biologically important molecules (triglycerides, phospholipids, second messengers and hormones). Fatty acids are one of the major forms of storage of metabolic energy. They are good sources of energy because they are mainly composed of –CH2 groups which can be readily reduced. Because of their hydrophobic nature, they need not to be solvated, compared to carbohydrates. The long hydrophobic tail of fatty acids can be packed tightly in storage tissues. This allows for concentrated storage.

The saturated fatty acyl-CoA molecule will be degraded in a series of four reactions that are part of the β-oxidation. The first reaction involves oxidizing the molecule through the α and β-carbon forming a double bond. Acyl-CoA dehydrogenase catalyzes this process at the expense of a FAD molecule. The product of this process is trans-Δ2-enoyl CoA.

In the second step, the trans-Δ2-enoyl CoA will be hydrated in the presence of an enoyl-CoA hydratase forming an L-3-hydroxy acyl CoA. It is then oxidized further to 3-ketoacyl CoA using L-3-hydroxy acyl CoA dehydrogenase as a catalyst. This process proceeds using up one NAD+ to form NADH and H+.

The final step is catalyzing by thiolase. A cysteine residue in the enzyme attacks the β-keto carbon atom. Bond cleavage occurs producing the enolate of acetyl CoA and a thioester intermediate. The final product of β-oxidation is a 2-carbon shorter acyl-CoA. These β-oxidation steps are successively repeated until enough acetyl CoA units are produced.

Fatty acid synthesis follows the same sequence as β-oxidation, except it is in the reverse order. It is the creation of fatty acids from acetyl CoA and NADPH through actions of fatty acid synthetases in the cytoplasm of cells. Here, NADPH acts as a reductant to reduce the ketoacyl and enoyl intermediate of the process.

The whole synthesis process obtains enough energy from the decarboxylation step for it to occur.

Milk Composition and Synthesis via ansci.illinois.edu