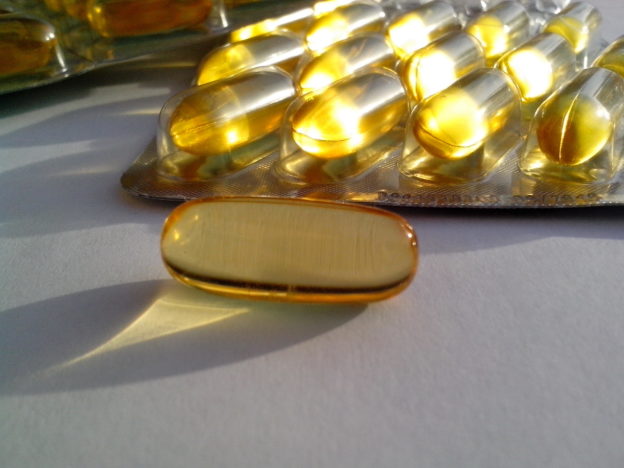 For the human body to function in the long term, it is important that excessive energy sources (like fatty acids) are stored after food intake in order to be degraded in phases of hunger or increased need for energy, i.e., during sport. For fatty acids, the storage form is triacylglycerol (TAG). 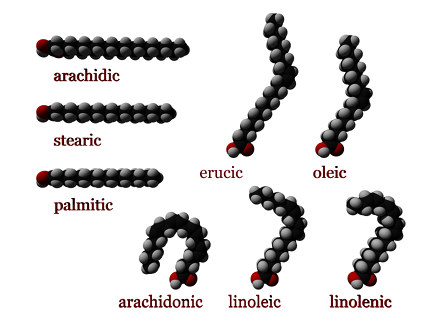 Fatty acids are stored in adipocytes as triglycerides and can be degraded in the same location, if needed.

Fatty acid import into the mitochondria

Before fatty acids can pass the mitochondrial membrane, they are activated with coenzyme A (CoA), thus, forming Acyl-CoA. This reaction is catalyzed by acyl-CoA-synthetase and consumes ATP.

In the matrix, there is a 2nd transferase, carnitine acyltransferase II, which again transfers the acyl group to CoA. Thus, carnitine is free and can be used for another exchange with acylcarnitine for the translocase.

In the mitochondrial matrix, acyl-CoA can be further broken down to acetyl-CoA. This degradation is performed via a metabolic cycle called β-oxidation since the oxidation occurs at a β-carbon atom.

Acyl-CoA is oxidized to enoyl-CoA under the conversion of FAD (flavin adenine dinucleotide) to FADH2. This reaction is catalyzed by acyl-CoA-dehydrogenase.

Enoyl-CoA is then hydrated to hydroxyacyl-CoA via enoyl-CoA-hydratase.

At this point, the 2nd oxidation reaction occurs: Hydroxyacyl-CoA is oxidized to ketoacyl-CoA via hydroxyacyl-CoA-dehydrogenase. During this process, NAD+ is converted to NADH and H+.

A ketothiolase catalyzes the next reaction. This happens as the thiol group of another CoA molecule is transferred to the ketoacyl-CoA. Thus, acetyl-CoA is split off and an acyl-CoA that is now shorter by 2 carbon atoms remains. The latter can enter another oxidation cycle.

Even and saturated fatty acids

Even and saturated fatty acids can be completely degraded to acetyl-CoA via the 4 steps of β-oxidation mentioned above. This is the simplest form of degradation. The same scheme also occurs in the degradation of uneven or unsaturated fatty acids. However, further intermediate steps and enzymes are necessary.

At first, uneven fatty acids are oxidized just like the even fatty acids, according to the 4 steps mentioned above. This continues until the point where propionyl-CoA remains after acetyl-CoA has been split off in the last step. Via several additional steps, it can be converted into succinyl-CoA, which then enters the citric acid cycle.

Under ATP consumption and via propionyl-CoA-carboxylase, propionyl-CoA is carboxylated to methylmalonyl-CoA in the form of the D-isomer.

L-methylmalonyl-CoA is converted to succinyl-CoA via a mutase. This last step is vitamin B12-dependent since it is an intramolecular rearrangement.

In one oxidation cycle, acetyl-CoA, FADH2, and NADH and H+ are formed as mentioned above. However, 2 ATPs are used to regenerate AMP to ATP for the activation of the fatty acids in the cytosol.

For example, the degradation of C16 palmitic acid results in 7 oxidation cycles. This means that 8 acetyl-CoA, 7 FADH2, and 7 NADH and H+ are formed. Acetyl-CoA is further processed in the citric acid cycle, while NADH is further utilized in the respiratory chain. One mole of palmitic acid eventually yields 106 moles ATP.

The acetyl-CoA resulting from the degradation of fatty acids, would, at one point, enter the citric acid cycle. In order for this to happen, acetyl-CoA has to be bound to oxaloacetate. Oxaloacetate is a product of glycolysis. If the number of carbohydrates that are taken in is insufficient, or if oxaloacetate is used for gluconeogenesis in the state of hunger, an imbalance of acetyl-CoA and oxaloacetate develops.

As a result, acetyl-CoA cannot enter the citric acid cycle. Thus, in this situation, it is converted into the so-called ketone bodies, which consist of acetoacetate, D-3-hydroxybutyrate, and acetone. You can read how ketone body synthesis proceeds, and which tissues rely on it.

This takes place via the citrate-malate-shuttle: acetyl-CoA is transferred to oxaloacetate, resulting in citrate. In exchange with a molecule of malate, it is transported into the cytosol via the mitochondrial membrane.

In the cytosol, fatty acids are synthesized by an enzymatic complex, fatty acid synthase. It is a homodimer enzyme with 2 identical subunits, each having several domains with catalytic centers.

Each subunit has 2 exposed SH-groups that have a central and peripheral location, respectively, with regard to the U-shaped protein complex. The central SH-group is a functional group of phosphopantetheine. It is anchored to the acyl-carrier-protein (ACP) and serves in the temporary fixation of intermediate products and the malonyl groups during fatty acid synthesis.

The peripheral SH-group is at the amino-terminal domain of the subunits. It accommodates the intermediate products of fatty acid synthesis, while the central SH-group binds a new malonyl group.

Under ATP consumption, acetyl-CoA is converted to malonyl-CoA via acetyl-CoA-carboxylase, which contains biotin. In an intermediate step, biotin-enzyme forms, whose activated CO2 group is transferred to acetyl-CoA, so that malonyl-CoA is formed. This reaction is irreversible and serves as a pacemaker reaction of fatty acid synthesis.

With the help of NADPH as a reduction equivalent, acetoacetyl-ACP is reduced to D-3-hydroxybutyryl-ACP.

The next reaction is catalyzed by 3-hydroxy acyl-dehydratase. Crotonyl-ACP is formed as water is split off from D-3-hydroxybutyryl-ACP. Thus, this step realizes the process of dehydration.

With the help of enoyl-reductase, crotonyl-ACP is converted to butyryl-ACP. This is a reduction reaction that uses NADPH as a reduction equivalent. Hereby, the first round of the elongation is terminated.

For further elongation of the chain, steps 3–6 are repeated: condensation, reduction, dehydration, and reduction. Butyryl-ACP is condensed with malonyl-CoA to ketoacyl-ACP. Eventually, it is provided for the next elongation as acyl-ACP with 6 carbon atoms.

A frequent result of fatty acid synthesis is a chain of 16 carbon atoms. A thioesterase can split the ACP off from C16-acyl-ACP, resulting in palmitate and ACP. In order to elongate the chains to more than 16 carbon atoms, further C2-units of malonyl-CoA molecules are attached to the chain. This reaction is catalyzed in the cytosol by enzymes that are located in the endoplasmatic reticulum.

The above-mentioned steps of fatty acid synthesis only lead to the elongation of the chain. The insertion of double bonds depends on other enzymes that are located at the endoplasmatic reticulum.

Fatty acid synthesis is regulated by influencing the key enzyme of the synthesis, acetyl-CoA-carboxylase. This enzyme is activated by citrate (substrate) and inhibited by acyl-CoA compounds (products).

Malonyl-CoA inhibits carnitine-acyltransferase I, which catalyzes the step determining the speed of fatty acid degradation. This prevents the simultaneous synthesis and degradation of fatty acids.

Increased occurrence of AMP, which is considered a hunger signal, leads to phosphorylation via an AMP-activated protein kinase and, thus, to the inactivation of acetyl-CoA carboxylase. 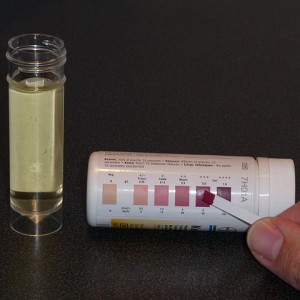 The term ketonuria or acetonuria means the presence of ketone bodies in the urine. This can be an expression of several causes, which can also occur in healthy people undergoing prolonged catabolic situations. Examples are long fasting, fever, or continuous physical exertion. Generally, metabolic diseases like diabetes mellitus have to be excluded.