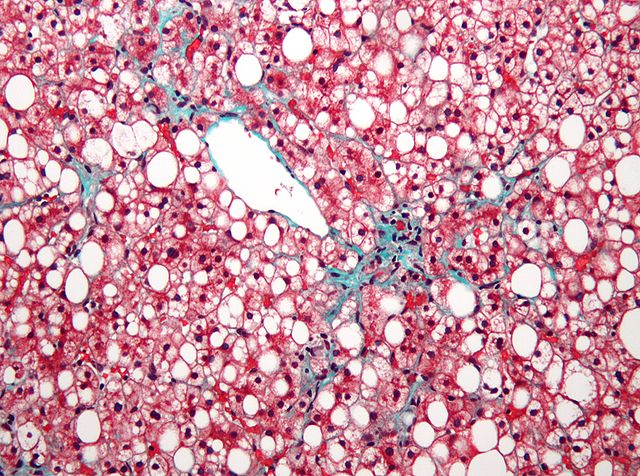 Digestion and Absorption of Lipids

Along with carbohydrates and proteins, fats constitute a significant amount in our diet. Neutral fats make up the largest percentage in the kind of fat present in the food that we eat, although sufficient amounts of cholesterols and phospholipids should also be present as well. Like most nutrients, these are not absorbed in the digestive tract as they are. They have to be broken down into simpler forms, which is why they have to undergo a series of processes as they pass along the digestive tract.

Being a combination of 3 fatty acids and a glycerol backbone, neutral fats or triacylglycerols have to be simplified to their component molecules in order for them to be absorbed in the intestines. This is done mainly by hydrolysis, the cleavage of the neutral triacylglycerol molecule into its components by the addition of water molecules with the help of digestive enzymes. This process can also be seen in the chemical digestion of other macronutrients such as carbohydrates and proteins. Generally, hydrolysis of nutrients can be pictured out in the following equation:
Although a small amount of fat-digesting lipase is present in the structures of the upper gastrointestinal tract (GIT) such as the mouth, the digestion of fats primarily occurs in the small intestine.

After mechanically and chemically breaking down the food stuff in the stomach and in the intestines, the fats are emulsified. This happens when the chyme or the partially digested food from the stomach reaches the duodenum and mixes with bile coming from the liver. This substance contains bile salts and lecithin that help form micelles. These micelles help in accelerating fat digestion. Lipases released from the pancreas would then act on the micelles to break down a single triacylglycerol molecule into 2 fatty acids and a molecule of 2-monoglyceride. 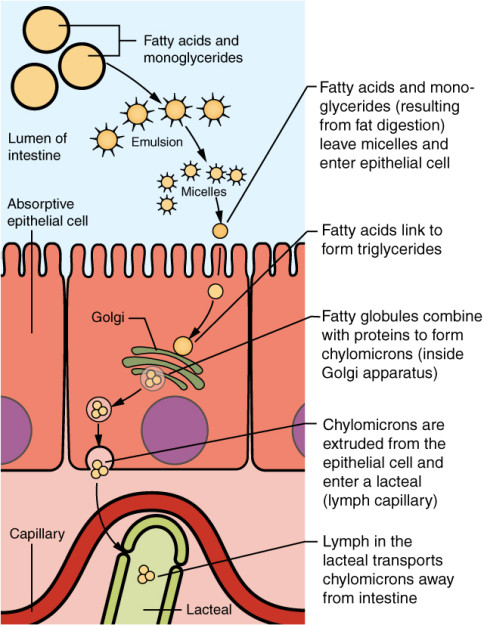 Once the triacylglycerols are broken down, the formed fatty acids and monoglycerides are then delivered to the surfaces of the cells lining the small intestines. They diffuse out of the micelle and into the interior of the cells, only to be taken up by the cell’s smooth endoplasmic reticulum where they are combined again to form a triacylglycerol. These newly formed triacylglycerol enters the blood stream, via the lymphatic system, with the help of chylomicrons, a type of lipoprotein which will be discussed further later on. Thus, triacylglycerols are exclusively absorbed through the chylomicron pathway. Recent studies have shown that high density lipoproteins also play a significant role in absorption of other dietary lipids like phospholipids, cholesterol, retinol, and vitamin E.

The lipids are hydrophobic and need to travel with along with lipoproteins in aqueous media. Lipoproteins are basically the transport shuttles responsible for carrying lipids to and from the intestines, liver and the rest of the peripheries. They are made up of a hydrophobic core and a hydrophilic shell, allowing them to carry nonpolar lipids across the polar environment inside our vascular system. The former is composed of triacylglycerols and cholesterol esters, whereas the latter is formed by a combination of apolipoproteins, unesterified cholesterols and phospholipids. They are classified according to their compositions:

The intestines and the liver essentially act as the ‘pit stop’ for both exogenous and endogenous lipid forms. They are also examples among the few organs in the body that can secrete particulate lipid.

These lipid molecules enter the circulation by first embarking on unoccupied chylomicrons and VLDL. These lipoproteins are composed of different apolipoproteins, with apo-B making the largest percentage. This component actually determines the lipoproteins’ ability to carry triacylglycerols in the bloodstream, as evidenced by patients suffering from abetalipoproteinemia. In this rare disorder, fatty deposits form around the liver and intestines as lipoproteins containing the apo-B protein cannot be synthesized.

As already mentioned, VLDL is composed of apo-B. In particular, apo-B100 is the one present in VLDL and its degradation products. In order for VLDL assembly to happen in the hepatocytes, sufficient amounts of apo-B100 and triacylglycerols should be present. The former is produced by the ribosomes, and is transferred to the lumen of the endoplasmic reticulum.

There, the produced apo-B100 combines with a phospholipid with the help of a very important protein, the microsomal triglyceride transfer protein or MTP, forming the precursor of active VLDL, VLDL2. Once formed, VLDL2 are carried in vesicles to the Golgi bodies where they fuse with cytosolic triacylglycerol droplets to form VLDL1. After acquiring additional apolipoproteins from the circulating HDL, these become mature VLDL.

Disorders could arise if the body could not keep up with the increasing input of triacylglycerol from endogenous or exogenous sources. 2 of the most common conditions that are linked to high levels of plasma lipids, brought about by a variety of reasons, include non-alcoholic fatty liver disease and obesity. 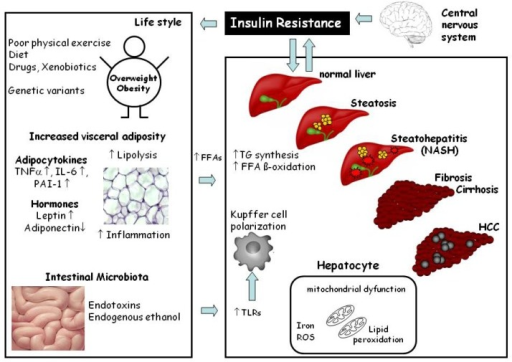 Image: “Schematic drawing of the molecular mechanisms involved in the development and progression of non-alcoholic fatty liver disease (NAFLD). The risk factors such as being overweight, visceral adiposity, adipocytokines may increase the flow of free fatty acids (FFAs) to the liver. Alterations of intestinal microbiota and increased permeation of bacterial endotoxins from the gut may activate Toll-like receptor signaling cascades and lead to a M1 polarization of macrophages (e.g., of Kupffer cells and infiltrating macrophages). All these events (e.g., increased FFAs, adipocytokines, endotoxins, insulin resistance, macrophage polarization) may lead to the development of NAFLD.” by openi. License: CC BY 3.0

As mentioned above, triacylglycerols have to be loaded on lipoprotein shuttles in order for them to travel to the different parts of the body for storage or oxidation. However, in cases where lipoprotein production and secretion, particularly that of VLDL, is overwhelmed, globules of triacylglycerol could remain immobile in organs where they are stationed, such as the liver. This condition is called non-alcoholic fatty liver disease or NAFLD (alcohol is one of the most common etiologies for fatty liver deposits).

NAFLD can occur in the following situations:

When there is an exaggerated imbalance in the supply and demand of energy in the body, we tend to store this excess energy in the form of adipose tissues. Unfortunately, this can have serious implications towards our predisposition to chronic disorders including acute coronary syndromes, cerebrovascular accidents and liver diseases. Lipids have also been directly implicated in the process of atherosclerosis; specifically LDL cholesterol may have a role in initiation and progression of the atherosclerosis process.

Although dietary and lifestyle factors have always been the center of attention in the control of obesity, one must also take into consideration other factors including concurrent disorders and heredity.

Approach to Patients with Problems in Lipid Accumulation

Aside from taking a thorough health history from these patients, it is also important to include the evaluation of the anthropometrics, including the weight, height and body mass index. A detailed evaluation of the degree of physical fitness and the type of diet maintained by the patient should be documented as well. One should also assess for any comorbid conditions as this could assist us in modifying our treatment plan.

Management of these patients usually includes lifestyle and diet modifications. However, in some cases, pharmacotherapy could also be included. Often drugs like fibrates, statins, and niacin, are used in such patients that target the dyslipidemia and cardiovascular risk. In obese patients, drugs acting at lipid absorption may also be indicated that primarily target the weight loss process. 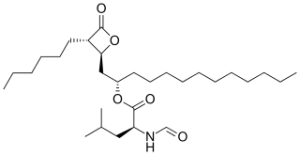 Orlistat is synthetically derived from Streptomyces toxytricini, a mould that produces lipostatin. This substance is a potent lipase inhibitor that occurs naturally.

This drug works by reversibly inactivating the lipases secreted by the pancreas and the rest of the GIT. It does this by covalently binding to the active portion of the lipases in the lumen of the stomach and intestines. This results to the inhibition of hydrolysis to occur and the retention of the triacylglycerol’s structure, making it too large for absorption in the intestines to occur.

Precaution and Side Effects

Since orlistat causes fats to remain unabsorbed in the GIT, side effects are related to the retention of fats. These may include the following:

Vitamins and minerals that require fat for absorption in the small intestines may also turn out to be deficient in patients taking orlistat. Examples of these vitamins include the fat-soluble vitamins A, D, E and K. Deficiency of these vitamins could manifest as night blindness (vitamin A), bleeding (vitamin K) and all sorts of signs and symptoms that are seemingly unrelated to the GIT.

Intake of fatty food may exaggerate the signs and symptoms listed above. Since orlistat is not readily absorbed in the GIT and acts locally, it does not appear to have any effects when taken with other drugs that are metabolized in the body.

When used along with hypocaloric diet, orlistat treatment results in reduction of body weight of around 3 kg at 1 year and secondary improvements in blood pressure, LDL cholesterol, blood sugar levels. Serious adverse events are rare but gastrointestinal side effects may cause non adherence to treatment. 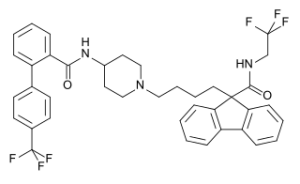 In certain patients, a hereditary defect in their hepatocyte’s LDL receptors may cause the increase in lipids in the blood stream. These receptors are responsible for the endocytosis of LDL which is derived from triacylglyceride-depleted VLDL. This results in an increase in the LDL and VLDL levels in circulation, predisposing patients to other serious complications such as atherosclerosis.

This is where lomitapide comes in. It antagonizes the action of MTP in the synthesis of VLDL in hepatocytes. Along with LDL apheresis, this medication significantly decreases the amount of both LDL and VLDL in the plasma.

Since lomitapide only exerts its effect on the production of lipoproteins necessary for the transport of triacylglycerols in the liver and peripheries, it could result to the immobilization of fats as manifested by fatty deposits around the liver. Long-term use of lomitapide may also increase the risk of steatohepatitis and liver fibrosis. This is also associated with numerous side-effects concerning the GIT.

It has been found out that lomitapide slightly inhibits the ability of CYP3A4, an enzyme system in the liver that metabolizes numerous drugs including other lipid lowering agents. This means that the amount of drugs could be elevated in the bloodstream when taken with lomitapide. It is therefore suggested to observe caution when giving this drug with drugs metabolized using this enzyme system.