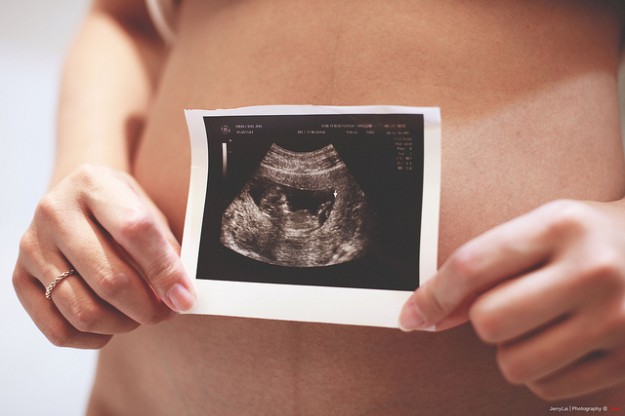 After a successful conception, the fertilized ovum is implanted into the endometrium, where the placenta forms. The placenta is responsible for the production of the hormone beta-HCG (human chorionic gonadotropin) that is typically seen in pregnancies. The increased amount of this hormone is used for the detection of pregnancies. It is considered to be a reliable proof of pregnancy. The most reliable proof, though, is a sonographic examination.

During the first prenatal examination, the expected date of birth is supposed to be calculated. However, the results of the sonographic examination are not very helpful yet, because the amniotic sac is too small and the crown-to-rump length cannot yet be measured. Therefore, the first day of the last menstruation is used to calculate the date. The following formula is called Naegele’s rule:

This rule is used for a normal cycle length (28 days). If the menstrual cycle deviates, days should be subtracted or added (extension of Naegele’s rule).

During every examination, blood pressure is controlled to preclude hypertension. The weight, the urine, and the hemogram are examined regularly.

Because about 5% of all pregnant women develop diabetes for the first time (gestational diabetes), blood glucose is tested routinely.

Ultrasound examinations take place in the 10th, 20th, and 30th weeks of pregnancy. Several parameters are controlled for. Control of vitality and detection of malformations, as well as malpresentation, of the fetus are essential. In advanced pregnancy, malpresentation of the fetus is particularly important. Moreover, the placenta and the quantity of amniotic fluid are evaluated.

The bimanual gynecologic examination is also important for prenatal care. It is carried out until the 16th week of pregnancy. After this, the so-called Leopold’s maneuvers are used. These serve to determine the fundal height, position, and size of the child, as well as the quantity of amniotic fluid.

The first maneuver is used to determine the position of the child. Both hands of the examiner are placed close to the fundus. This maneuver can also be used to estimate the fundal height. Navel, xiphoid, and costal arches are used for orientation.

The second maneuver is carried out by placing the hands on both sides of the uterus. While doing this, the examiner can estimate the position of the fetus’s back.

While carrying out the third maneuver, the right hand is placed at the pelvis. The thumb and fingers are used to identify the fetus’s head and other body parts. Through slightly sudden movements against the uterine wall (ballottement), the flexibility of the head can be tested. If there is no flexibility, the head has already entered the pelvis.

The fourth maneuver is important to determine the relationship between the pelvis and the preceding part. The examiner faces the woman’s feet. Both hands are placed on the ulnar side in relation to the pubic bone.

To evaluate the cervix, vaginal examinations are carried out during the preventive appointments. During these appointments, it is important to estimate the width of the uterine orifice, the length of the cervix and the level and consistency of the cervix.

Control of fetal vitality is also an important part of the examination. This is assessed using ultrasound at the beginning of the pregnancy. The heartbeat can first be identified in the fifth week of pregnancy. The movements of the child are also signs of vitality. Typically, these can be determined by cardiotocography (CTG).

Bleeding during the First Trimester

Bleeding incidents during pregnancy can have different reasons. They are categorized according to the stage of pregnancy.

In the first half of the pregnancy, the reasons for bleeding can be abortion, nidation bleedings, trophoblastic tumors, ectopic pregnancy, or cervical carcinoma.

If bleeding occurs in the second half of the pregnancy, the differential diagnosis includes placenta previa, premature placenta abruption, uterine rupture, bleeding of a placental edge, or a bloody show during suspected delivery.

Bleeding can also occur during birth. The reasons for this can be uterine rupture, bloody show, premature placenta abruption, or insertio velamentosa. Insertio velamentosa is characterized by strong bleeding after the rupturing of the membranes and is a life-threatening danger to the child.

In the case of emergency, shock prevention, which would include a volume substitution, would be carried out. In a clinic, stopping of the bleeding with surgical measures would be attempted. If none of the measures are successful, a hysterectomy would be considered.

Etiology and epidemiology of FAS

In all stages of pregnancy, alcohol is harmful to the embryo and the fetus. With a prevalence of 1 in 300 pregnancies, FAS occurs more often than innate malformations such as Down’s syndrome.

However, the consequences of alcohol use affect the most sensitive human organs and are more frequent than FAS. The effects are characterized by, among other things, brain achievement weakness, behavioral changes, and behavioral problems.

Alcohol and its metabolites harm the body’s cells, especially tissues with a high regenerative capacity. The substance can be compared to a mitotic toxin. Consequently, the growth of the child is restricted, resulting in hypoplasia or hypotrophy.

An important aspect of the cumulative occurrence of alcohol abuse is social class. Studies have proven that socially disadvantaged women more frequently give birth to children with growth restriction. In these studies, this phenomenon occurred only rarely in middle-class women.

Affected children are usually smaller and have low body weight. In this context, the reduced weight can be traced back to muscle hypertrophy.

Typical characteristics of the children are craniofacial changes. In various tissues, the hypertrophy expresses itself in a particularly strong way: Frequently, the lower jaw is shifted back (maxillary hypertrophy) and the lips are narrow and drawn in. Rarely, the mouth is large and broad. The philtrum is narrow and frequently grouped because of the maxillary hypertrophy. Usually, the nasal bridge is missing, which gives the impression of a ‘snub nose.’ Very often, the palpebral fissure at the eyes is narrowed and horizontally shortened.

FAS is characterized by growth disorders and organic damage of the cerebrum and the cerebellum, as well as minor and major abnormalities. These disorders occur in particular after heavy abuse of alcohol by pregnant women.

The infections that are most feared are members of the TORCH (toxoplasmosis, other infections, rubella, cytomegalovirus, and herpes simplex or neonatal herpes simplex) complex. These pose a risk to the mother and an additional risk of inducing embryologic abnormalities in the fetus. The effects of these infections range from spontaneous abortion through embryopathy and fetopathy to long-term damage to the child.

Bacterial colonization of the fetal membranes occurs during the amniotic infection syndrome. Usually, this is caused by the ascension of bacteria through the vagina. Moreover, a hematogenic spread of bacteria from another source of infection is possible, e.g., from the urogenital tract.

Signs of infection such as fever, a painful uterus, and bad-smelling fluorine can be determined. Rupture of the membrane is also possible.

Premature rupture of the membrane is excluded diagnostically and a bacteriologic smear is taken from the pregnant woman. In certain periods, infectious disease markers such as C-reactive protein (CRP), leukocytes, and the blood sedimentation speed should be controlled. The fetus should be monitored by cardiotocography. During this procedure, it is very important to monitor a loss of oscillation or a rise in the baseline.

After birth, all findings should be given to the pediatrician to ensure the intensive care of the newborn child.

Typical causes of the amniotic infection syndrome are, among others, Gardnerella vaginalis, Enterobacteriaceae, and streptococci.

In a case of suspected streptococcal infection (type B) of the mother sub, part ampicillin should be given. After birth, the newborn child should be monitored for signs of infection.