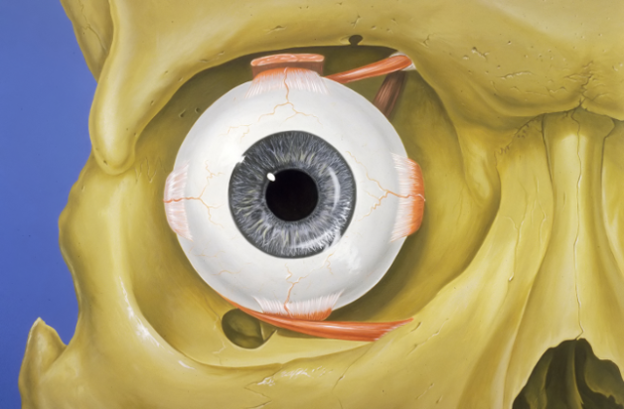 Extraocular muscles are present in the retrobulbar space (behind the eyeball) and are responsible for coordinated movements of the eyeball.

Origin and insertion of the extraocular muscles 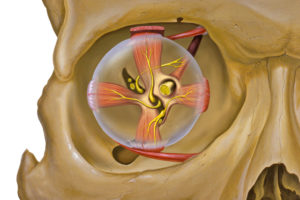 The superior rectus originates from the annulus of Zinn (common tendinous ring) and is attached to the top of the eye 7.7 mm from the limbus.

The inferior rectus is attached to the bottom of the eye 6.5 mm from the limbus. It also originates from the annulus of Zinn.

The medial rectus is attached to the side of the eye near the nose 5.5 mm from the limbus. 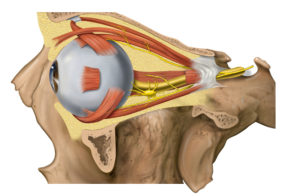 The lateral rectus is attached to the side of the eye near the temple 6.9 mm from the limbus.

The inferior oblique starts from the front of the orbit near the nose from the maxillary bone just behind the lacrimal space. It travels backward posteriorly and laterally in the orbit before attaching to the inferior of the globe.

Innervation of the extraocular muscles

Cranial nerve IV (trochlear nerve) enters the middle of superior oblique muscle between the origin and the trochlea. Nerves of all the other muscles enter their respective muscles at the junction of the anterior two-thirds and posterior one-third. 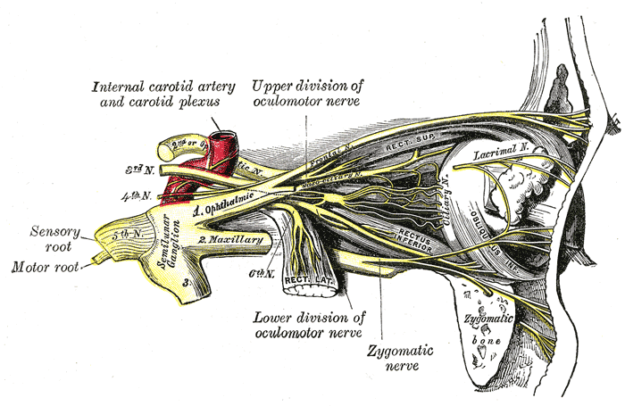 Image: “Nerves of the orbit, and the ciliary ganglion – side view” by Henry Vandyke Carter, Henry Gray (1918) Anatomy of the Human Body, plate 777, License: Public Domain

Function of the extraocular muscles

The superior rectus moves the eye upwards and medially in the vertical plane. Both the superior recti pull up the eyeball and allow the individual to look in an upward direction. Upward gaze is because of the function of the two superior recti.

The superior oblique rotates the eyeball inward, downwards and nasally along the long axis of the eye.

The inferior oblique rotates the eye outward and upward.

Levator palpebrae superior is the muscle of the eyelid. It holds the eyelid up, keeping the eyes open. The blinking reflex involves this muscle through a reflex arc.

Assessment of the extraocular muscles

Medial and lateral recti have simple actions – they move the eye in the horizontal plane (left and right). To test the extraocular eye muscles, the patient is asked to follow the examiner’s finger who moves it in the air making the figure of an H. The superior oblique muscle points the eye down when it is looking medially and the inferior oblique muscle points the eye up when it is looking medially.

So, if a patient is looking up and to his right, he is using his:

Knowing the function and innervation of the extraocular muscles is extremely helpful for diagnosing neurological disorders such as brain herniation, and eye motility disorders like strabismus.

Anatomy of the Eye via aapos.org

The Eye Exam via ucsd.edu

One thought on “Extraocular Muscles – Basic and Clinical Anatomy”