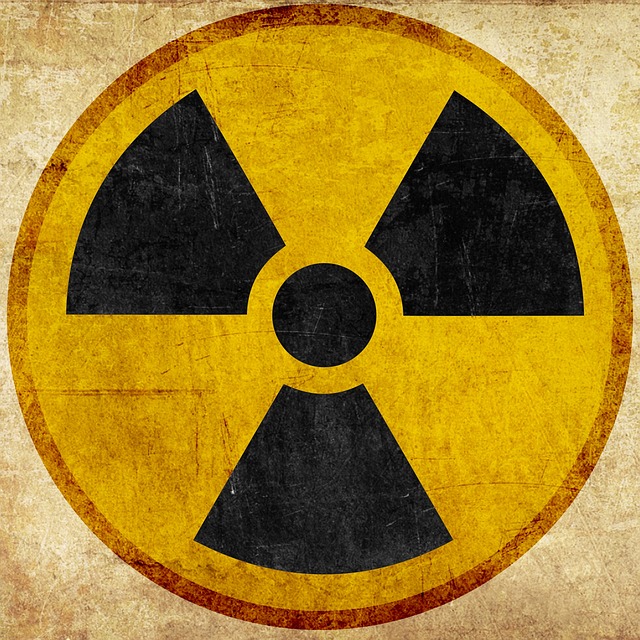 Here you will find the first section of the article concerning Ionizing Radiation and Radioactivity.

As early as 1905, long before the discovery of nuclear energy, the German physicist Albert Einstein proposed his theory of relativity demonstrating that mass and energy are 2 manifestations of the same phenomenon. According to his formula E = m*c², the energy of 24 billion kilowatt-hours accounts for a mass of 1 kilogram. This massive energy is stored in atomic nuclei.

The acquisition of atomic energy is thus nothing more than converting some of the mass within the nuclei into energy. This simple logic formed the foundation of radiation.

Radioactivity can be recognized by its diverse effects. For instance, radiation emitted by radioactive substances blackens a light-sensitive photographic plate. Radiation causes flashes of light in fluorescent materials, which is only visible with a spinthariscope in complete darkness. 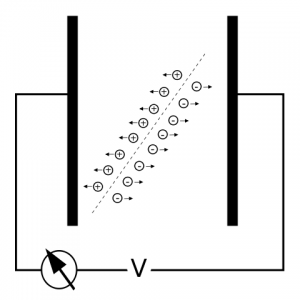 Ionization chambers: The ions created between the 2 electrodes via impact ionization are accelerated by potential, which then enters the inner filament where a current pulse is visible. However, a measurable current pulse only occurs as a result of multiple incidental alpha particles or correspondingly high radiation.

The impinging particles lead to a brief discharge pulse that can be enhanced and measured. These pulses are also audible in the form of crackling.

The pulse rate depends on the radioactivity, the distance between the source of radiation and the counter and the design of the counter.

The scintillation counter: The impinging radiation in a scintillation counter triggers the emission of light flashes by specific luminescent materials. These flashes are observed and counted upon magnification. The electrons emitted are then enhanced in secondary electron multipliers. This method uses the most sensitive and efficient radiation measurement device to detect radioactive materials.

The Wilson chamber: In a Wilson chamber, the air is oversaturated with water vapor. The ions created to serve as condensation nuclei upon which water condenses. The resulting condenser streaks reveal the process of radiation or the particle trajectory. 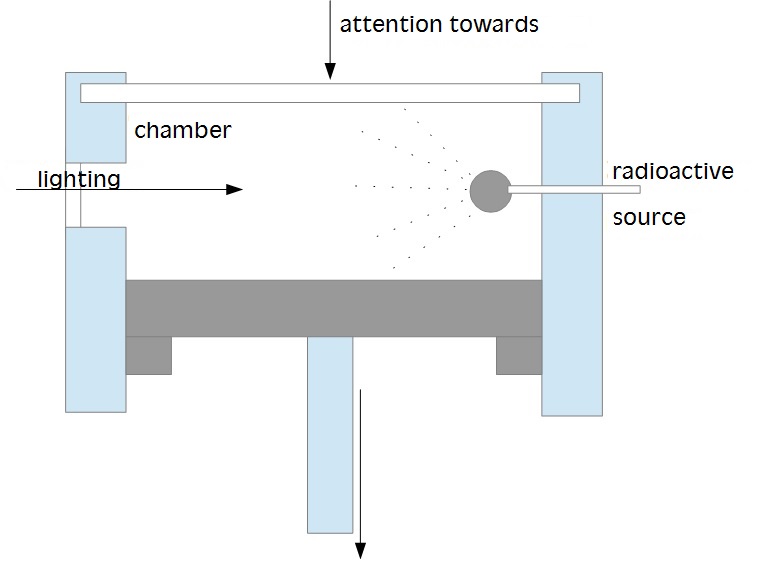 Risks and benefits of radiation

In the field of medicine, radionuclides are frequently used in therapy and diagnostics. Compounds with low half-life and specific characteristics are used for enrichment in organs.

Archeology and paleontology utilize radiocarbon dating. This process uses the half-life of the carbon isotope, which is 5,730 years. This carbon isotope is integrated into the organic substance of a living organism to a varying extent. Upon the death of an organism, the amount of carbon isotope in the organism decreases. The age of materials can thus be calculated.

In engineering, radiation is used to sterilize devices, refine substances and conserve food, among other things.

The human body is influenced by transient exposure to higher and continuously decreasing radiation. Internal radiation is defined as the radiation emitted by radioactive substances that enter the body via food intake and respiration. Radioactive materials are distributed throughout the body or are stored in specific organs. Iodine, for example, is stored in the thyroid gland, strontium in the bone and radon in the lungs.

The effects of ionizing radiation on humans depend on the type, energy, duration and temporal distribution of the radiation as well as the radiosensitivity of the specific organ.

Because of the great danger of ionizing radiation of any sort, guidelines have been set by legislation. The maximum permitted biological doses are set:

A low level of radiation emitted by radioactive substances is ubiquitous in nature. This is referred to as the so-called null effect, which is based on 2 types of constant radiation:

Sievert is the unit of biological dose. One sievert is equal to 1 joule per kilogram.

Based on the model of natural radioactivity, scientists have always attempted to convert an atom of 1 specific element into an atom of a different element by bombarding the nucleus with light particles, such as protons, deuterons, neutrons, and helium nuclei. However, the nucleus is difficult to hit and the forces holding the nucleus together are very strong.

In 1919, the English physicist Rutherford successfully converted individual nitrogen atoms into oxygen atoms by bombarding with alpha rays in the Wilson chamber.

Rutherford converted another 12 elements using similar experiments. The energy of alpha particles is not sufficient to break down heavy nuclei. To do so, particles, such as protons and deuterons are needed to raise to another level of energy by particle accelerators.

The law of absorption

Nearly all applications, except for analytics, are based on various types of radiation absorption.

The degree of absorption is conveyed by radiographic film or suitable detectors. Factors underlying the absorption of radiation, especially for radioactive rays, include:

N.B. The Law of Absorption states that gamma radiation is exponentially weakened via absorption by a material placed between the radioactive source and the recipient.

The decrease in intensity with increased distance is explained by the more frequent interaction between the photons in the air. The resulting weakening, however, is generally insignificant and only amounts to 5% of the useful radiation in the air for 100 kV tube voltage and 2 mm AI total filtration, for example.

The law of distance: The loss of radiation intensity from a roughly point-shaped source is inversely correlated with the square of the distance from the emitting source, as the emitted radioactive particles are distributed homogeneously onto a surface at an increasing distance.

The lead equivalent of a substance is the thickness of a lead layer that has the same attenuating effect as the observed material in the actual thickness.

Example: A 100 kV of X-ray radiation weakens a 12-cm-thick brick wall as much as it weakens 1 mm of lead. This brick wall thus has a lead equivalent of 1 mm.

Ionizing radiation has an effect on cells affected by radiation. The respective effect can vary greatly and may also be fatal in some individuals depending on the intensity and type of radiation.

The following parameters must be defined in advance to describe the effect of ionizing radiation.

The energy dose describes a quantity of energy absorbed by an object (e.g., tissue) exposed to radiation. It is primarily dependent on the radiation intensity of the ionizing radiation and tissue absorption. The unit of the energy dose is the gray [Gy].

The ion dose is defined as the amount that provides radiation strength. It is defined by the following formula:

Molecules are destroyed by ionizing radiation. However, the damage caused solely by momentary radiation and destruction is relatively low. The damage caused by the subsequent chemical reactions in the body is much greater.

The various forms of biological effect are:

The most dangerous type of radiation is alpha radiation. Its typically very short-range ensures that the risk of harm is very low, and exposure to alpha radiation can be screened using a simple sheet of paper. Direct tissue contact with an object emitting alpha rays, for instance, via inhalation of radioactive dust or swallowing such objects is dangerous.