Effects of Estradiol and Progesterone & Menstrual and Endometrial Cycle 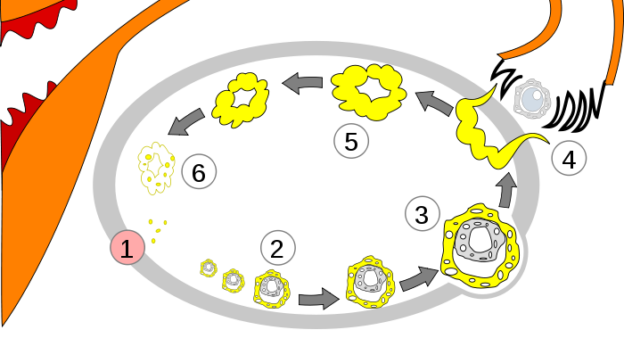 The ovaries secrete the hormones, estradiol (estrogen) and progesterone, which play important roles in the female reproductive cycle.

Estradiol is the most common type of estrogen in women of reproductive age. During childhood, the amount of estradiol secreted by the ovaries is minimal. When puberty is attained, there is a 20-fold increase in estradiol levels.

This phenomenon occurs under the influence of the pituitary gonadotropic hormones. Estradiol plays an important role in the development of primary and secondary female sexual characteristics, some of which are highlighted below. 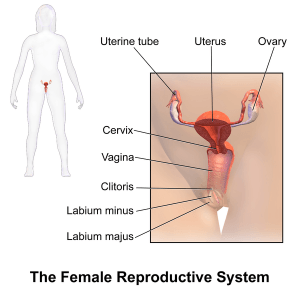 Estradiol brings about an overall increase in the size of female reproductive organs and external genitalia. It causes the deposition of fat in the mons pubis and labia majora and the enlargement of the labia minora.

The size of the uterus increases to three times its size. There is a marked proliferation of endometrial stroma and the development of endometrial glands during each menstrual cycle.

The glandular tissues in the fallopian tube proliferate with an increase in the number of ciliated epithelial cells. The cilia become more active and propel the ovum towards the uterus. This maximizes the chances of fertilization.

Breast enlargement occurs under the influence of estradiol along with the deposition of fat and development of stromal tissues and the ductile system. Estradiol, however, does not cause lactation.

Osteoblastic activity increases under the influence of estradiol and causes an overall increase in height during puberty. There is also an early union of epiphyses with the shaft of long bones. The increase in the height in women, therefore, ceases after a few years as compared to men. Osteoporosis in older women after menopause is due to the deficiency of estrogen. Hormone replacement therapy is often indicated in this condition.

The protein levels in the body increase as a result of an enlargement of the sexual organs. At the cellular level, estradiol increases RNA transcription, and consequently, protein synthesis.

Estradiol increases the vascularity of the skin and gives it a soft texture. Hair distribution on the skin is not brought about by estrogens but controlled by the androgens produced by the adrenal glands. 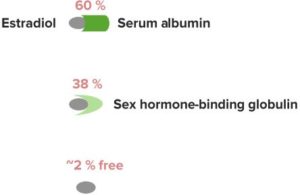 “Transport in the Blood” Image created by Lecturio

Estradiol, like other adrenocortical hormones, causes sodium and water retention; however, this effect is slight and goes unnoticed in women who are not pregnant.

Estrogen receptors are either the traditional cytosolic-nuclear complex type (similar to other steroid hormones) or less commonly, the cell-membrane type.

Progesterone, an important ovarian hormone playing a role in the female reproductive cycle, is responsible for several other functions as listed below.

It promotes the secretary functions of the uterine endometrium, which prepares the endometrium for implantation of the fertilized ovum in the second half of the menstrual cycle.

The secretory functions of the lining of the fallopian tubes are also enhanced to nourish the dividing zygote after fertilization.

Progesterone in large amounts may enhance reabsorption of sodium, chloride, and water from the distal tubules of the kidney.

Another important event occurring during this cycle is the release of a mature follicle or ovum from one of the two ovaries. This process is known as ovulation. Both menstruation and ovulation occur under the rhythmic control of the hypothalamic, pituitary, and ovarian hormones.

The menstrual cycle primarily consists of the proliferative and secretory phases. This may be followed by menstruation if fertilization does not occur.

The primordial follicle, in which the ovum is surrounded by a single layer of granulosa cells, remains inhibited by the oocyte-maturation inhibiting factor in childhood.

At puberty, when the pituitary gland starts producing LH and follicle-stimulating hormone (FSH), the process of follicular growth is initiated. FSH causes an increase in the number of granulosa cell layers around the ovum, converting it to the primary follicle. It is responsible for the growth of 5–6 primary follicles each month. The rise in FSH levels precedes that of LH by a few days. Spindle cells from the interstitium of the ovary surround the granulosa cells to form a layer of cells called theca.

The theca differentiates into two layers, namely, the theca interna and theca externa. The latter becomes the outer capsule of the developing follicle. After a few days, the granulosa cells secrete a follicular fluid that forms the antrum. This follicular fluid secretes estrogen, which increases the FSH receptors on granulosa cells, thereby creating a positive feedback response.

After a week of initial growth, one growing follicle outgrows all others. The other follicles undergo atresia. The growing follicle starts producing more estrogen, which causes a surge in LH, leading to the release of the ovum from the ovary on approximately day 14 of the cycle.
After the previous menstruation cycle, most of the endometrial lining is desquamated and only a deep layer is left behind. Under the influence of estrogen secreted by the ovaries, the stromal and epithelial cells proliferate.

The endometrial thickness is regained within 4–7 days following menstruation. There is an increase in the number of stromal cells, growth of endometrial glands, and an increase in vascularity. This process continues until ovulation occurs, during which, the endometrium is approximately 3–4 mm thick. During ovulation, the cervical glands secrete thin, stringy mucus which forms channels to direct sperm towards the uterus for fertilization.

After ovulation, a corpus luteum that consists of granulosa and theca cells is formed in its place. The corpus luteum secretes high levels of estrogen and progesterone. While estrogen causes further proliferation of the stromal cells of the epithelial lining of the uterus, progesterone is responsible for the secretory development of these cells.

Image: “Development Stages of the Ovarian Follicle.” by The original uploader was Sunshineconnelly at English Wikibooks – Transferred from en.wikibooks to Commons by Adrignola using CommonsHelper. License: CC BY 3.0

The blood supply to the endometrium increases and the blood vessels become increasingly tortuous. The ‘uterine milk’ secreted by the endometrium nourishes the fertilized ovum. In addition, there is lipid and glycogen deposition in the cytoplasm of the stromal cells. The endometrium is thus prepared for the implantation of the embryo.

If implantation occurs, the trophoblasts forming the outer lining the blastocyst digest the endometrial cells and absorb the stored substances. The lining of the endometrium is 5–6 mm thick at the end of the secretory phase. The adjoining figure illustrates the developmental stages of the ovarian follicle.

The levels of estrogen and progesterone decline two days prior to the end of the menstrual cycle. The hormonal effect on the endometrial lining diminishes. It is followed by the involution of the endometrium to 65% of its previous thickness. This causes vasospasm of the tortuous blood vessels. High levels of prostaglandins released at this stage are also responsible for the vasospastic response. 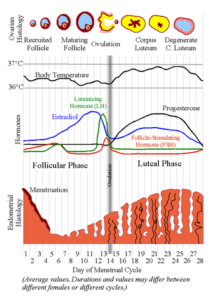 Image: “Menstrual Cycle.” by Lyrl – Derived from Image: MenstrualCycle.png, an image made by the user Chris 73. License: CC BY-SA 3.0

Approximately 40 mL of blood and 30 mL of serous fluid are lost during menstruation. The fibrinolysin present in blood prevents blood clotting; however, if excessive bleeding occurs, the fibrinolysin becomes insufficient and blood clots may be seen. Normal menstrual flow lasts 3–7 days.

Leukorrhea during menstruation is a normal physiological phenomenon that prevents infection. The endometrium becomes resistant to microbes despite being denuded. The image alongside gives a detailed account of the menstrual cycle.

Regulation of the Menstrual Cycle

The interplay between the ovarian and hypothalamic-pituitary hormones is summarized in this section.

Estrogen initially has a suppressive effect on FSH and LH. Just before ovulation, there is a two-fold and six-fold increase in the levels of FSH and LH secreted by the pituitary gland, respectively. This is known as the LH surge and is mandatory for ovulation to occur. Estrogen has a positive feedback effect.

After ovulation, progesterone and estrogen secreted by the corpus luteum have a negative feedback effect and decrease the production of LH and FSH. However, when the corpus luteum involutes just before menstruation, the levels of estrogen and progesterone begin to fall. This phenomenon reinitiates the production of FSH and LH for the subsequent cycle.

Inhibin is another hormone that works synergistically with estrogen and progesterone in lowering the production of FSH. However, it does not play a significant role in lowering the amount of GnRH released by the hypothalamus.