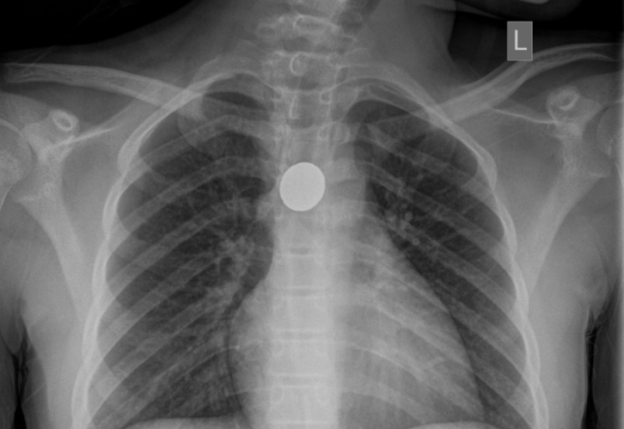 The esophagus is more susceptible to trauma than the rest of the gastrointestinal tract because it lacks a serosal layer (which contains elastic and collagen fibers) that provides stability against trauma.

Instrumental injuries of the esophagus (iatrogenic injuries) are considered the most common causes of perforation by shearing forces. These injuries can also be caused by different gastrointestinal procedures, such as upper gastrointestinal endoscopy and strictures dilation.

Direct piercing or shearing forces along the longitudinal axis of the esophagus, especially if associated with atrophy of the esophageal wall from necrosis, may also occur.

Boerhaave’s syndrome, the spontaneous rupture of the esophagus, may occur as the result of a sudden rise in intraluminal pressure, usually because of vigorous vomiting or retching after, for example, the consumption of heavy meals and alcohol.

Iatrogenic effects represent the main cause of esophageal perforation, occurring in about 75% of cases. These effects occur during diagnostic and therapeutic procedures such as endoscopy, stricture dilatation, esophageal varices ligation, and endotracheal intubation.

Boerhaave’s syndrome accounts for about 13% of esophageal perforation. It occurs due to an increase in intraluminal pressure against the closed lower esophageal sphincter. This is mainly caused by violent vomiting and retching after, for example, the consumption of heavy meals and alcohol.

The swallowing of foreign bodies such as pills and coins can cause esophageal perforation directly by piercing, or indirectly by increasing intraluminal pressure.

Blunt trauma can affect any part of the esophagus. Sometimes, the diagnosis is delayed secondary to other traumatic injuries.

Esophageal perforation is a serious life-threatening disease that must be diagnosed rapidly to avoid fatal complications. Diagnosis depends on accurate history taking, observation, and clinical examination of the patient.

Severe chest pain is a common symptom at the site of perforation. It is considered a cardinal symptom for esophageal perforation. Chest pain usually has acute and sudden onset and radiates to the back or to the left shoulder.

The classic presentation of Boerhaave’s syndrome is severe and vigorous vomiting or retching followed by severe chest pain or epigastric pain. Patients may also present with chest or abdominal pain that occurs after straining, childbirth, seizures, hiccup, severe cough, or even blunt trauma.

The ingestion of foreign bodies or caustic material; the presence of fever and pain in the abdomen, neck, upper back, and chest; dysphagia; dyspnea; and odynophagia or dysphonia following esophageal instrumentation should increase the suspicion for esophageal injury.

Patients who are older than 65 years are also at higher risk for perforation during esophageal instrumentation.

Hematemesis may be present, but is normally not an obvious symptom.

Physical examination is usually nonspecific, but certain clinical findings can aid in diagnosis, including fever, tachycardia, tachypnea, and hypotension.

Mediastinal emphysema appears as crepitus at the base of the neck, then as subcutaneous emphysema on the neck and chest wall.

Mackler’s triad, which comprises chest pain, vomiting, and subcutaneous emphysema, is classically and usually associated with spontaneous esophageal rupture and is present in about 50% of cases.

Auscultation of the chest can be an important sign. It may show Hamman’s sign, which is a crunching sound that can be heard over precordium with each heartbeat, and which is caused by mediastinal emphysema. It often occurs with thoracic or abdominal perforations.

If the perforation reaches the pleural cavity, it may lead to pneumothorax and pleural effusion, which can cause respiratory distress.

Prognosis is good if the problem is found within 24 hours of occurrence. Most patients survive if surgery is performed within 24 hours. The survival rate decreases when treatment is delayed, however.

Differential diagnosis involves a wide variety of causes of chest pain; each has a characteristic presentation and should be differentiated from esophageal injuries:

Chest X-rays may show subcutaneous and mediastinal emphysema. Pleural effusion, pneumothorax, and hydropneumothorax may occur after traumatic injury of the esophagus, and are highly suggestive of traumatic esophageal perforation. As well, a mediastinal air-fluid level that shows free air under the diaphragm may be present.

A V sign, which may indicate pneumomediastinum, can be seen in esophageal perforation. The first limb of the V is produced by mediastinal gas that outlines the left lower lateral mediastinal border. The other limb is produced by gas between the parietal pleura and medial left hemidiaphragm.

Esophagography is the best diagnostic tool to use, as it can reveal the site and extent of perforation. Gastrografin is used in esophagography instead of barium, as it can cause severe inflammation of the tissue and mediastinitis.

The patient lies on the right lateral decubitus position. A barium study can be done immediately if the Gastrografin study is negative, as the sensitivity of barium is higher than Gastrografin.

A CT scan with contrast of the chest and upper abdomen may reveal the presence of a leak, which is suggestive of esophageal perforation. A CT scan can confirm the findings that may be present in a chest X-ray and esophagogram; as well, it is better than plain X-ray at diagnosing traumatic perforation.

Upper endoscopy can be used in the early diagnosis of patients with suspected traumatic esophageal injury and when there is a high suspicion of perforation without radiographic findings. Flexible endoscopy allows the visualization of the esophagus and stomach in order to detect whether there is esophageal injury, especially if there is no previous history of esophageal instrumentation.

Tube thoracostomy may be used to decompress the chest. Fluid removed may be gastric contents or sometimes pus, which can form after a significant delay in diagnosis and treatment.

Prognosis depends mainly on proper treatment and appropriate drainage of any contamination in the pleural space or the mediastinum.

The surgical approach utilized depends on the state of the esophagus (healthy or diseased by malignancy or stricture) and the site and degree of perforation.

The best surgical approach comprises primary repair, with or without debridement of the mediastinal; pleural drainage of the ruptured esophagus; mediastinal debridement; and pleural drainage. This is achieved through a transabdominal or transthoracic approach, depending on the site of perforation.

In iatrogenic cases, especially if there is a stricture distal to the site of perforation, myotomy is indicated and the defect is closed by fundoplication.

If the esophagus is damaged or diseased, primary repair cannot be done but resection of the diseased part and fundoplication is possible.

The use of a T tube is an alternative approach that may allow for a controlled esophagocutaneous fistula to be done, which allows healing to occur without contamination. The T tube is usually removed after 4–6 weeks in most patients, after which the fistula eventually closes.

Diversion and exclusion of the esophageal secretions must be done to allow healing and prevent further contamination and infection.

Minimally invasive techniques have been described to treat this condition, but they are used only if there are no significant signs of contamination and sepsis, no major risk factors that could prevent the procedures, and no contraindications for laparoscopy and thoracoscopy.

Endoscopic stent placement is performed only in highly specialized centers, and for patients with underlying diseases that preclude surgical intervention. There must be no underlying esophageal pathology.

Esophageal Rupture and Tears in Emergency Medicine via medscape.com

Esophageal perforation: diagnostic work-up and clinical decision-making in the first 24 hours via nih.gov

Overview of esophageal perforation due to blunt or penetrating trauma via uptodate.com

Boerhaave syndrome: Effort rupture of the esophagus via uptodate.com

Esophageal perforation: diagnostic work-up and clinical decision-making in the first 24 hours via  sjtrem.biomedcentral.com