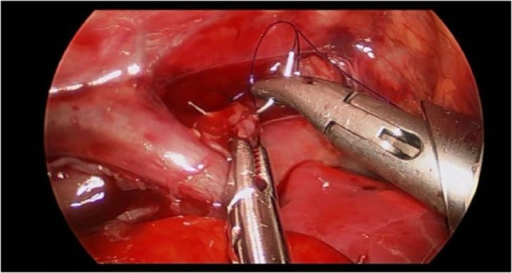 Image : The 1st stitch was completed proximal to the arch of the azygos. All the next procedures were taking place proximally to the azygos vein, leaving the vein untouched. By Joana Fonte, Catarina Barroso, Ruben Lamas-Pinheiro, Ana R. Silva, and Jorge Correia-Pinto, License: CC BY 4.0

A disorder that affects many body systems, the disease is often (up to 50% of cases) associated with other malformations such as VACTERL association and CHARGE syndrome.

The esophagus develops in the embryonic period from the foregut. First, there appears a connection between the respiratory and digestive pathways which will be closed in the course of development by the esophagotracheal septum up to the proximal sector.

Disturbances in this development, during the 4th up to the 6th weeks of pregnancy, often cause the esophagus to end in a blind-ended pouch, rather than connecting normally to the stomach, frequently in combination with a tracheoesophageal fistula in the lower section.

Esophageal atresia may be divided into types 1–3 according to Vogt:

And finally, there is ‘H-fistula’: in this case, tracheoesophageal fistula exists but there is no esophageal atresia.

In the case of H-fistula, the symptoms appear in the later stage since there is no discontinuity of the esophagus. However, due to the existing fistula between the esophagus and the trachea, the baby often coughs and demonstrates aspiration from food at feeding time. The children often suffer from respiratory infections including pneumonia, due to a high risk of aspiration.

In some cases, the esophageal atresia can be diagnosed by prenatal ultrasonography, especially in the 3rd trimester.

In newborns, on suspicion of esophageal atresia, as a first step, the physician may use a gastric tube which can provide the 1st indication; The gastric tube should be protruded 10 cm deep, but not longer, so that the examiner may encounter resistance. The physician may inject air into the tube and check its location with a stethoscope: Typical gurgles cannot be auscultated as usual over the stomach. Also, no stomach contents can be aspirated (except for the case with H-fistula).

A chest X-ray can help in the diagnosis of esophageal atresia. The ‘blind sac’ sign is shown in the superior mediastinum in this study. The esophagus in its upper part is air-filled and demonstrates increased transparency up to its discontinuity. If contrast medium was used, the ‘blind sac’ appears to look hyper-transparent. In the case of a tracheoesophageal fistula, an air-filled stomach is also evident due to the connection between the trachea and the esophagus.

Note: In the chest X-ray you may scan the ‘blind sac’ and diagnose esophageal atresia.

In endoscopy, a tracheoesophageal fistula can be represented particularly well.

Due to the known VACTERL association and CHARGE syndrome, further targeted diagnostics of the associated medical conditions should always be conducted.

Similar clinical patterns as in the case of esophageal atresia

If a newborn baby has the symptoms described above, other medical conditions should be kept in mind along with esophageal atresia. During a cesarean section, a newborn may swallow a big amount of amniotic fluid and then produce frothy sputum. However, this should be self-adjusted after the corresponding expectoration. Furthermore, achalasia, esophageal stenosis or impaired swallowing reflex could have similar clinical patterns.

The operation is not an emergency procedure; however, it should take place within the 1st 2 days of life. Preoperatively, a baby must not be fed or intubated to avoid aspiration. Using a gastric tube, salivary secretion can be derived from the upper esophageal section. Parenteral nutrition as well as an adequate fluid and electrolyte balance is necessary. If you suspect aspiration pneumonia, a course of antibiotics should be prescribed.

Note: In the case of suspicion of esophageal atresia, the baby should not be fed! 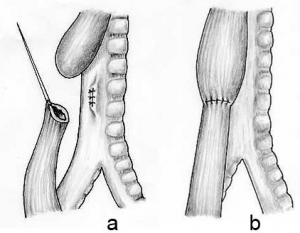 When operating, it should be attempted to anastomose the 2 esophageal ends with each other; any existing fistula should be closed. If a direct end-to-end anastomosis is not possible, a gastric pull-up as an esophageal replacement with plastic tubes may be required.

The prognosis is usually very good, but it is also optionally dependent on the additional malformations. Unfortunately, during the operation, fairly frequent long-term complications, such as (GERD) a gastroesophageal reflux disease, or anastomotic stenosis may occur.