Lecturio is using cookies to improve your user experience. By continuing use of our service you agree upon our Data Privacy Statement . x
Are you more of a visual learner? Check out our online video lectures and start your dermatology course now for free! 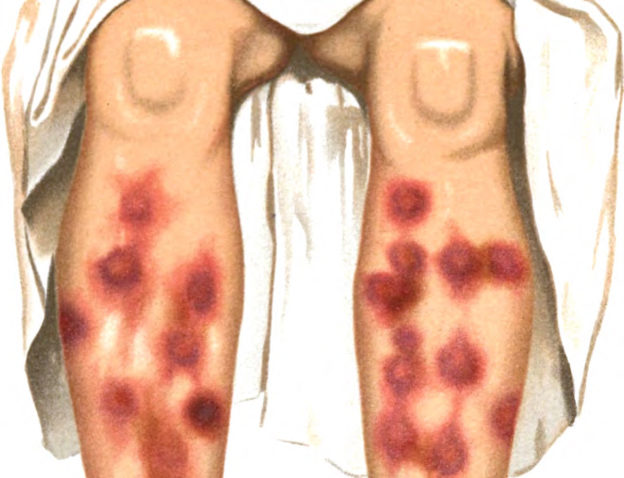 Definition and Epidemiology of Erythema Nodosum

EN is a type of panniculitis (most common), which is characterized by a sudden onset of red, warm, and tender nodular eruptions on shins. Erythema nodosum may be accompanied by other symptoms such as fever. A number of factors can trigger EN; hence, it is supposed to be a cutaneous reactive process.

Incidence and prevalence of EN vary with varying etiological factors and geographical locations. Studies from Spain have shown the average annual incidence of biopsy-proven EN in patients aged 14 years and above to be 52 cases per million population. The prevalence of EN in a study from a semi-rural area of England was 2.4 cases per thousand population per year.

EN is known to occur at all ages; however, the maximum number of cases is between the second and fourth decades of life. A high incidence has been seen between 20 and 30 years of age. This could be due to the high incidence of sarcoidosis in this age group which is associated with EN.

EN is seen to occur more in women than men, with the occurrence being three to six times more in women. However, in the prepubertal age groups, the incidence is the same among girls and boys.

EN is known to be associated with the following diseases in 15 – 30% of cases:

A number of etiological factors have been implicated to trigger EN:

Malignant diseases: EN has not been very well documented with malignancies; however, few reports show an association with adenocarcinoma of the colon, carcinoid tumor and carcinoma of the uterine cervix.

Sarcoidosis is an important trigger for EN among adults.

Lofgren’s syndrome seen in sarcoidosis is characterized by EN, hilar adenopathy and arthritis around the ankles.

The pathogenesis of EN is not well understood. Some studies have shown the following:

Cutaneous reactive process: EN can be triggered by a number of diverse factors; hence, it has been proposed to be a cutaneous reactive process. A few studies have demonstrated the deposition of immune complexes in the subcutis. To support this, a few studies have demonstrated circulating immune complexes, complement activation and deposition of immunoglobulins in the subcutaneous fat septa. Other studies have proposed type IV hypersensitivity as a possible pathogenetic mechanism.

Reactive oxygen intermediates (ROI): patients have activated neutrophils in peripheral blood, and they produce ROI, which is four times higher as compared to healthy people; hence, ROI have been proposed to cause oxidative tissue damage and tissue inflammation.

Genomic anomaly: A genomic anomaly in the human TNF-alpha gene promoter where nucleotides exchange (G-A) is seen at position-308. This leads to the secretion of an uncommon TNF alfa II. This is seen in sarcoidosis associated EN patients. In a few EN patients, a polymorphism of macrophage MIF gene takes place at position-173, which is associated with an increased risk for developing sarcoidosis.

Increased proinflammatory cytokines: raised levels of serum IL-6 has been seen in EN due to infectious and non-infectious causes. Skin lesions and peripheral blood of EN patients have shown increased levels of Th1 cytokines (IL-2 and IFN-gamma).

EN is characterized by a sudden development of nodules on the skin, which may be accompanied by fever (38 – 39 ºC), cough, joint pains, malaise, abdominal pains, vomiting, diarrhea, and headache.

The characteristic lesions of EN are nodules which are erythematous, warm and painful to touch. The nodules may vary in size from 1 to 5 cm or more in diameter. Nodules may often merge to form erythematous plaques.

They involve the body symmetrically and bilaterally with a predilection for shins, ankles, and knees, but may involve other sites such as thighs, face, neck and extensor parts of arms. The nodules/plaques change in color with time i.e. bright red and elevated (early lesions) then livid red/purple and flat; finally a yellow or greenish appearance. As color change mimics that of a deep bruise, hence they were also known as erythema contusiformis. The lesions stay for 3 – 6 weeks and subside without marks or scarring; however, recurrences of EN are common.

Eye manifestations in the form of episcleral lesions and phlyctenular conjunctivitis have been seen with skin lesions.

Splenomegaly, hepatomegaly, lymphadenopathy, and pleuritis have been rarely seen among EN patients.

EN in children has a shorter duration with less frequent occurrence of fever and arthralgias as compared to adults.

The clinical history and relevant investigations should be done to find the trigger factors for EN; however, a skin biopsy is essential to make a confirmatory diagnosis of EN.

The most characteristic feature of EN histopathology is Miescher’s radial granulomas. These are small, nodular aggregates of histiocytic cells around a central stellate or banana-shaped cleft. These are found in the subcutis. The older lesions of EN may show the histiocytic cells grouping to form multinucleated giant cells.

Identification and management of underlying etiology are essential as a number of factors may underlie an episode of EN. Besides managing the underlying cause, the following treatment is given specifically for EN:

Progression and Prognosis of Erythema Nodosum

EN is self-limiting and regresses on its own in 3 to 4 weeks. However, relapses are frequent and more often seen in cases of EN, which are idiopathic or associated with streptococcal upper respiratory tract infections.