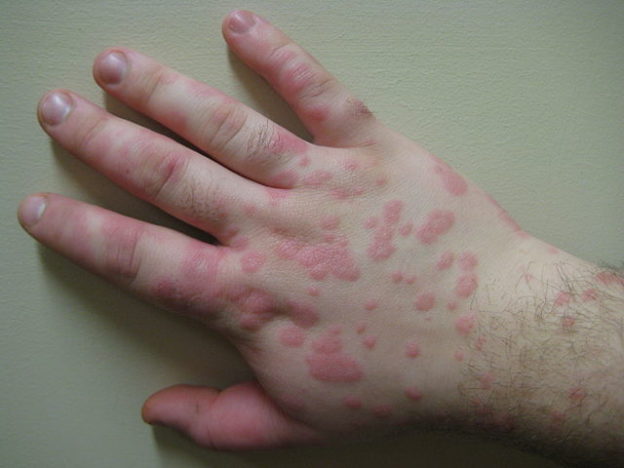 Image: “Erythema multiforme minor (note of make of the blanching centers of the lesion).” by James Heilman, MD – Own work. License: CC BY-SA 3.0

Initially, EM was considered to be a part of a clinical spectrum varying from mild to severe cases from EM, Stevens-Johnson syndrome (SJS) to toxic epidermal necrolysis (TEN). However, recently, EM minor and EM major are considered as separate entities than SJS and TEN, which are considered to be mainly drug hypersensitivity reactions.

Incidence: EM incidence is not known. However, a few studies have shown the incidence globally as 1.6 – 2 million cases per million per year.

Sex: EM occurs a little more commonly among males than females. Male to female ratio of involvement of EM is 3:2.

Many factors have been implicated to trigger EM. The most common triggers are herpes simplex infections (genital or facial) and mycoplasma infections. Other factors implicated can be categorized as follows:

Besides the triggering factors, immunology has been shown to have a role in the etiology of EM. Patients with recurrent EM cases have shown HLA‐B62 (B15), HLA‐B35 and HLA‐DR53.

Pathology and Pathophysiology of Erythema Multiforme

EM is caused due to a delayed-type IV hypersensitivity reaction. The herpes virus infection causes an increase of CD54 and major histocompatibility complex class 1 molecules. HSV DNA is found in EM lesions caused by the herpes virus. This HSV DNA is phagocytosed by peripheral blood mononuclear antigen-presenting cells and taken to distant skin sites. This leads to activation of SP 1 and INF-alfa. This leads to activation of an inflammatory cascade.

Histopathology of EM shows a varied pattern depending on the age of the lesion. The most important change seen is necrotic keratinocyte in the epidermis and upper dermis.

EM has been divided into different types based on their clinical features:

Papular or simplex form: This type is the most common form comprising 80% of cases. The lesions are macular, popular, urticarial or the typical target lesions, which are a dull red in color. The lesions can be small or increase in size to 1 to 5 cm in diameter with time. Lesions are mainly present over palms, feet, extensor aspects of elbows and knees. At times, trunk, oral and genital mucosa may be involved. Lesions appear in successive bouts for a few days and subside in 1 to 2 weeks leaving behind a discoloration.

These lesions are characteristically seen in typical cases of EM. They are rounded lesions with a size less than 3 cm in diameter and consisting of three zones: a central zone of dusky erythema or purpura, a middle zone of edema which looks pale and a peripheral zone of erythema with well-defined margins. The most common site of involvement is acral areas.

These are similar to the typical target lesions but have only two zones.

The skin lesions are mainly present as erythematous macules or plaques. These lesions often have a central bullous lesion and vesicles forming a ring at the periphery; this is known as Herpes iris of Bateman. Mucosal involvement is often seen.

This is a severe form with extensive involvement of skin and mucous membrane. The skin lesions are preceded by prodromal symptoms 1 to 13 days prior to the eruptions.

The diagnosis of EM is mainly a clinical diagnosis. The investigations are done in severe cases to aid in the management of patients.

Complete blood count and differential blood count: this shows a moderate leukocytosis with atypical lymphocytes and lymphopenia. Neutropenia and eosinophil counts greater than 1,000/mm3 may be seen.

Electrolytes and kidney function tests: These are done in severe cases to rule out and monitor organ involvement.

Skin biopsy: A skin biopsy is required to rule out other disorders, such as vesiculobullous diseases. Histopathology of EM typically shows a vacuolar interface dermatitis with the dermoepidermal junction (DEJ) showing lymphocytic infiltrate. The basal keratinocytes show dyskeratosis and hydropic changes. The vacuolar change is typically due to the necrotic keratinocytes due to apoptosis and is typical of EM.

Management of EM is done as per the severity of the disease.

Localized EM is managed symptomatically. Ocular involvement should be referred to an ophthalmologist.

Other than this, the medications which have been tried are:

Progression and Prognosis of Erythema Multiforme

EM is a self-limiting disease. EM minor usually subsides by 2 to 3 weeks and lesions heal without scarring. However, recurrences are more in this type of EM. Almost 30% of cases are known to have recurrences.

EM major has a longer course and may take 3 to 6 weeks to subside. Skin lesions heal leaving behind pigmentation. The mortality rate of 5% is seen among these patients. Some known poor prognostic factors are visceral involvement, older age, a previous history of bone marrow transplantation and increased urea nitrogen levels.

Q, A. A. (2012). Advances in Erythema Multiforme Research and Treatment: 2012 Edition: ScholarlyPaper. ScholarlyEditions.