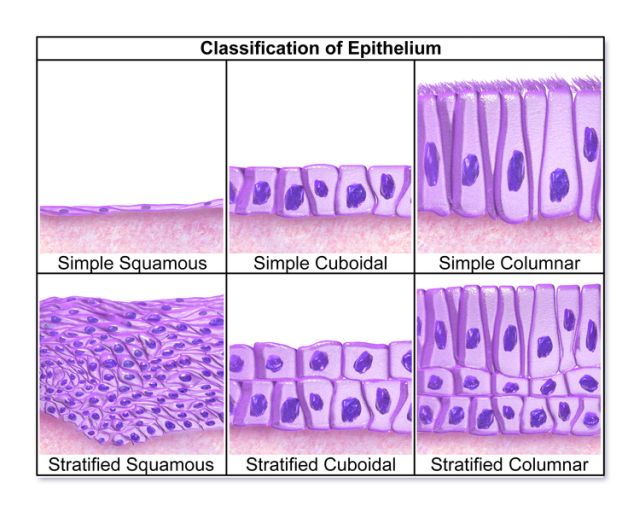 Definition of the Epithelial Tissue

The epithelium is a complex of specialized cellular organizations arranged into sheets without significant intercellular substance. They always occupy boundary surfaces of the body, i.e. they are located on the skin surface or the internal surface of hollow organs. From an embryological perspective, epithelial tissue derives from all 3 germ layers. Depending on their function, epithelial cells can be flat, cuboidal or cylindrical and are organized in either 1 or several layers. Epithelial cells connect to 2 different spaces and thus have an apical and a basal pole.

Apical is derived from the term apex which means peak. Basal, on the other hand, is derived from the base. In the medical nomenclature for hollow organs, the term luminal is often used to refer to the pole which faces the lumen. The pole oriented away from the lumen is called abluminal. The cell’s sidewalls are often structurally and functionally correspondent to the base and are referred to as the basolateral membrane. In other parts, epithelial tissues form the inner lining and external lining of body parts. To summarize, the apical pole faces the surface, while the basal pole is attached to the connective tissue located below the epithelium.

Image: Pseudo-stratified and transitional classification of epithelium. By Lecturio.

Functions of the epithelial tissue

General functions of the epithelial tissue include a barrier (protection of tissues from radiation, desiccation, and invasion by pathogens and toxins), secretion (substance release of hormones, sweat, mucus, and enzymes) and absorption (substance intake). It contains no blood vessels and no nerve supply; the ‘cell nourishment’ takes place between individual epithelial cells through the intercellular space.

Characteristics of the epithelial tissue

The epithelial tissue has a general characteristic that their cells are closely bound to each other through specialized structures such as tight junctions, desmosomes, interdigitations, gap junctions, and intercellular bridges. These gap junctions help in communication with 2 cells together by cementing each other. They constitute the linings of organs and body parts. They have 1 surface that is not attached to any cell, either exposed to the external environment or the lumen of an organ. They do not possess blood vessels and their nutrients requirement is fulfilled by connective tissue forming the basement membrane.

Image: The 3 characteristics of any epithelium. By Lecturio.

Epithelial cellular organizations are located on the basal membrane. The basal membrane is a thin extracellular matrix. It consists of the basal lamina, which is itself divided into the laminae rara externa and interna, the lamina densa, and the lamina fibroreticularis (except in renal corpuscles).

The surface epithelium primarily has barrier and transport functions. It is a mechanical and chemical barrier that prevents the uncontrolled substance exchange. It takes substances in (absorption) or releases them into the tissue (secretion). 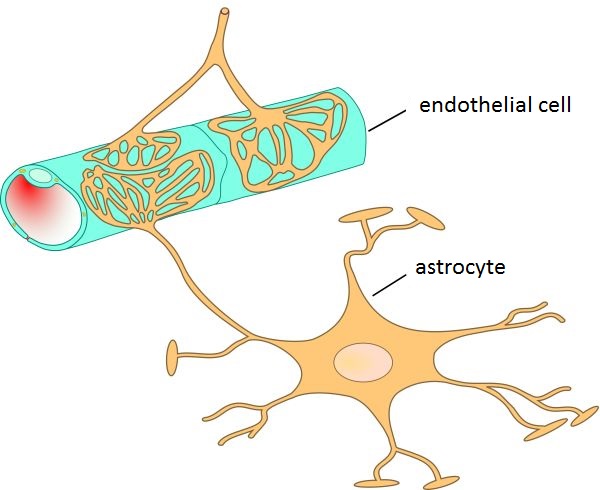 Image: Schematic representation of the endothelium with astrocytes in the blood-brain barrier. By Kuebi (added translation), License: CC BY 3.0 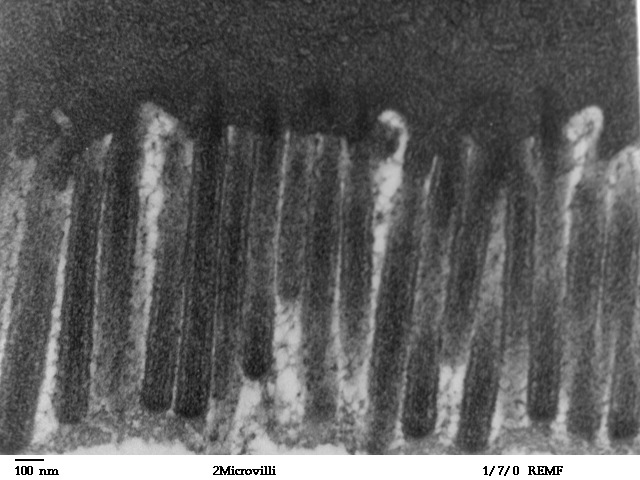 The simple columnar epithelium consists of longitudinal-oval cells with a uniform nucleus, aligned in a row mostly located at the base of the cell. Their apical surface is often covered with microvilli to facilitate a strong absorption. This epithelium type can be found in high secretary areas and absorptive areas, e.g., in the stomach, intestines, gallbladder, fallopian tubes, and uterus.

The cell shape of the stratified, non-keratinized squamous epithelium changes from the basal toward the free surface and is divided into 4 sections:

This type of epithelium is found in the mucosa of the oral cavity and esophagus, as well as the vagina, and the eye (corneal epithelium). 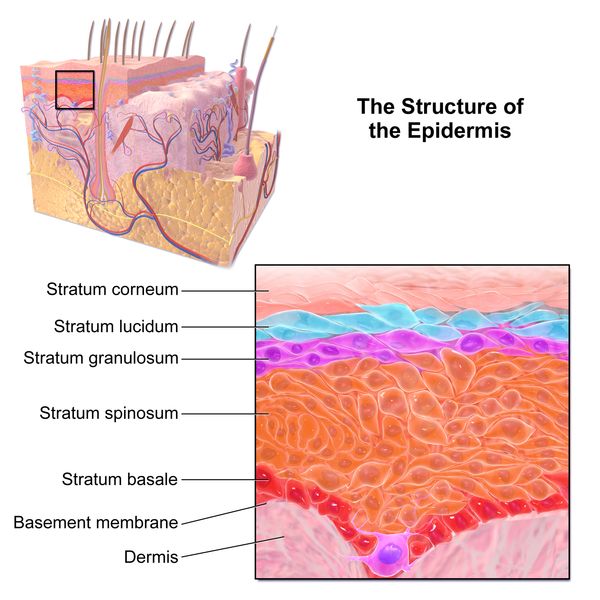 The outermost cell layers of the epithelium consist of flattened cells with no nuclei and cytoplasm, converting into scales. They are called the stratum corneum, and their purpose is to mechanically protect underlying tissue from dehydration.

The stratified, keratinized squamous epithelium is divided into 5 sections:

The above structure shows an example of the typical skin epithelium—the epidermis. It is the outermost layer of the 3 layers that make up the skin; the inner layers are the dermis and hypodermis. 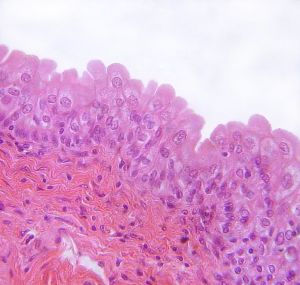 The urothelium consists of a basal layer, several intermediate cell layers, and an umbrella cell layer. Umbrella cells (superficial cells) are large and often have 2 nuclei. The crusta, a very dense network of cytoplasm, is located beneath its apical membrane. The plasma membrane consists predominantly of rigid plaques containing uroplakin (transmembrane proteins). Transitional epithelium is primarily found in the efferent urinary tract, i.e. in the renal pelvis, ureter, urinary bladder, and the initial part of the urethra.

Overview of the Epithelium

Associations of particularly differentiated and specialized epithelial cells are called glandular epithelium and consequently located in the glandular tissue. They are specialized in producing substances such as enzymes, hormones, sweat, oil, mucus, etc. and releasing them in the organism (secretion). The elaboration and release are carried out by external stimuli or constitutively into ducts on the surface of the blood. Based on the specialization of the glandular epithelium, we distinguish between exocrine and endocrine glands. The classification is based, among other factors, on the number and location of secreting cells and the type of secretion. 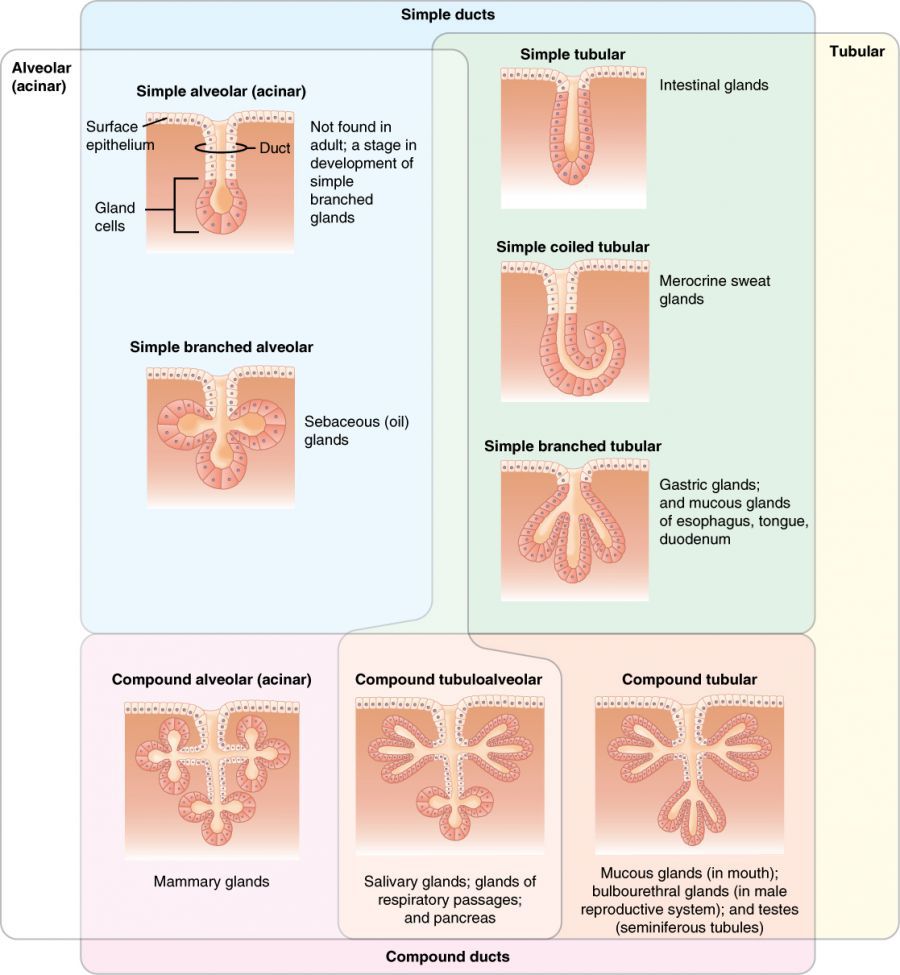 Image: Exocrine glands are classified by their structure. By Phil Schatz, License: CC BY 4.0

Exocrine glands secrete their products through a duct onto the inner or outer surface of the body. They have their ducts and extensive blood supply and are in control of hormones and nerves. Examples are salivary glands, sweat glands, tear glands, and mammary glands of the breast.

Endocrine glands release their incretions directly into the bloodstream and therefore have no excretory duct. Incretions are mostly hormones. Examples of endocrine glands are the thyroid gland, as well as the testicles and ovaries.

The pancreas has the particular anatomical and physiological characteristics of having both types of glands. Its exocrine portion passes digestive enzymes through the pancreatic duct into the duodenum, while the endocrine portion (islets of Langerhans) produces the hormones insulin and glucagon and releases them into the body. 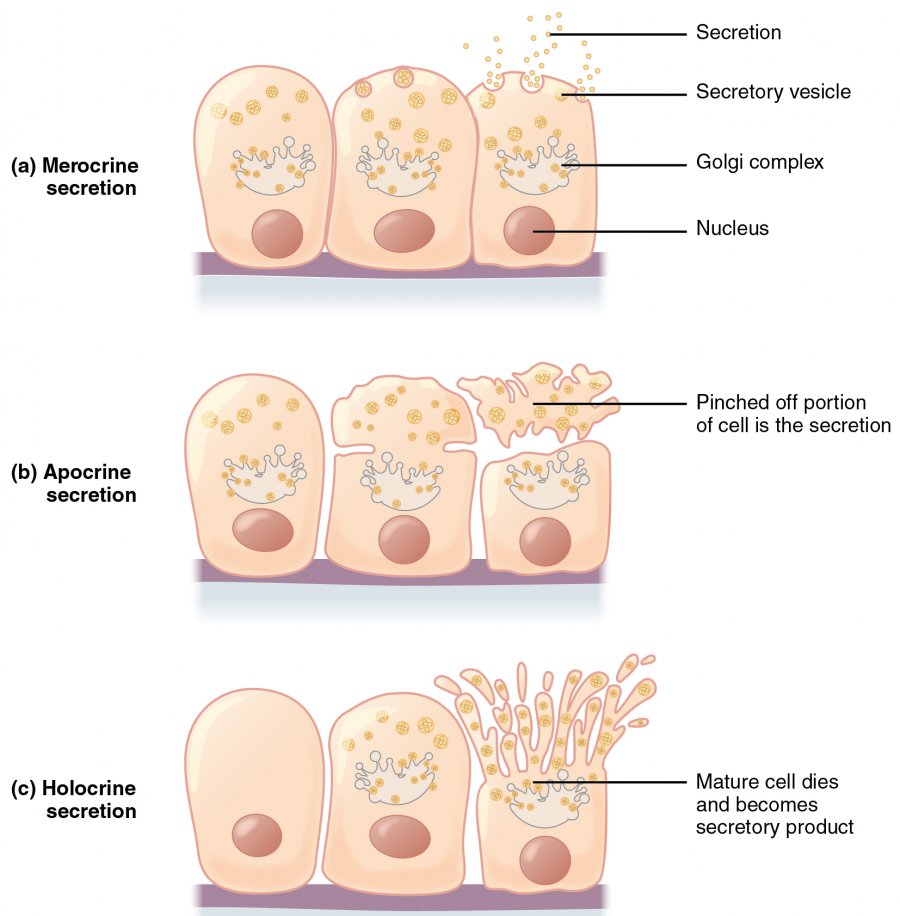 In addition to physiology and histology, a physician should know, understand and treat the pathology of the epithelium. Below you will see some examples of specific disease types and their symptoms.

In simple wounds, like cuts and scrapes, the healing process is done by the proliferation and spread of epithelial cells in 24 hours. Deep burns (3rd degree) are largely corrected by epithelial regrowth.

Papillomas are benign epithelial tumors. They grow in the stratified squamous epithelium. The most frequent form is the wart (basal cell papilloma), a proliferation of epithelial cells from the stratum basale of the skin. The result is a compact organized epithelial node that can keratinize.

Like the papillomas, adenomas are also benign epithelial tumors that can grow in glands. Adenomas can develop into malignant tumors, the so-called adenocarcinomas.

When in contact with a specific allergen, the skin epithelium is loosened up like a sponge by the formation of edema. This edema is an intercellular accumulation of fluid that can also converge into bubbles. Typical allergens that cause such eczema are, e.g., animal hair (epithelium allergy).

Epithelium in urine or urine sediment

If an unusually high concentration of epithelial cells is found in the urine or urine sediment samples, it should be assumed that a urinary tract infection has taken place. It gives rise to the need to be clarified by further analysis. 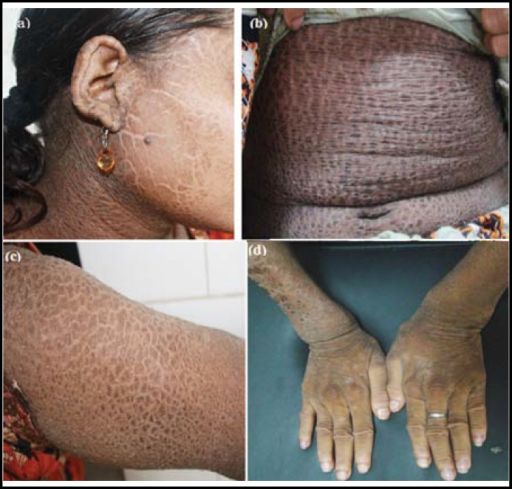 Image: Lamellar ichthyosis with rickets. By Openi, License: CC BY 3.0

4 thoughts on “Epithelium — Functions and Types of Epithelial Tissue”