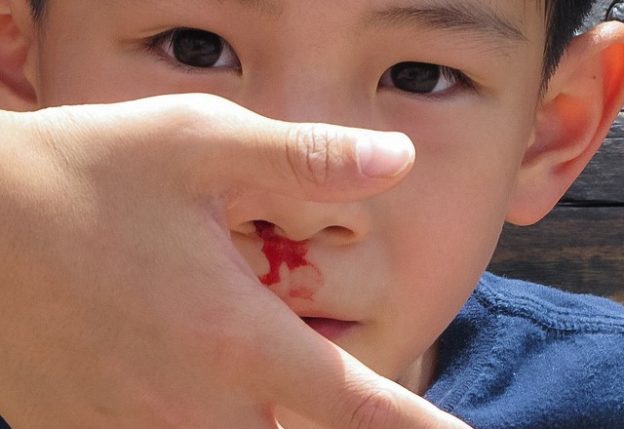 Epistaxis can be loosely defined as a nosebleed. Epistaxis can be an anterior bleed or a posterior bleed based on the site of the origin of the bleed. Nosebleeds in children are usually benign and are under-reported, but few cases can be related to neoplastic disease.

Epidemiology of Epistaxis in Children

The estimated incidence of epistaxis in children who visit the emergency department is 2 per 1,000 per year. The median age at presentation was 10 years.

Boys have a slightly higher incidence of nosebleeds compared to girls, i.e. 3 males to 2 females.

The prognosis in children with epistaxis is excellent unless a neoplastic process is associated with the nosebleed. Children with nosebleeds due to congenital or acquired coagulopathies are at an increased risk of morbidity and mortality due to the coagulopathy disorder and not the epistaxis episode itself.

Etiology of Epistaxis in Children

Trauma to the nose due to repeated nasal picking is a common cause of epistaxis in toddlers and older children but is unlikely in infants or in adolescents. Facial and nasal direct trauma can also cause epistaxis in children but, in that scenario, it is usually obvious that the child has sustained a traumatic injury.

Children who undergo nasal surgery are also at risk of developing a nosebleed which correlates with the degree of injury to the nasal lining mucosa and the major nasal vessels.

Children with repeated epistaxis especially in hot weather should be evaluated for possible nasal septal deviation. In this group of children, the most common site of bleeding is usually anterior.

Juvenile nasal angiofibroma is a rare cause of severe epistaxis that is usually seen in adolescent boys. Any child who presents with unilateral severe nasal bleeding should be evaluated for the possibility of a neoplastic condition such as a nasal angiofibroma.

Children with repeated severe nosebleeds after minor nasal trauma might have a congenital or acquired form of coagulopathy. Hemophilia and Von-Willebrand disease are two common causes of congenital coagulopathies that can be associated with recurrent epistaxis. Children who develop thrombocytopenia due to an autoimmune or an idiopathic etiology are also at risk of developing epistaxis.

Hypertension and migraine are two possible risk factors for epistaxis in children but their association with nosebleeds is not strong enough to be considered as an etiology. Approximately, 10% of the cases of epistaxis are of unknown cause.

Pathophysiology of Epistaxis in Children

Nosebleeds in children usually arise from the anterior nasal circulation. The most commonly involved origin arises from Little’s area where the anterior and posterior ethmoidal arteries communicate with the sphenopalatine and internal maxillary arteries to form the Kiesselbach plexus. This plexus can be injured from self-induced repeated nasal trauma, nasal or facial trauma, or can start oozing blood because of a bleeding disorder.

Clinical Presentation of Epistaxis in Children

History taking and physical examination of a child with epistaxis should focus on the assessment of the hemodynamic stability of the child and the characteristics of the nosebleed. When the child is hemodynamically stable, a detailed history of the nosebleed should be obtained.

The severity of the nosebleed, its duration and whether it is unilateral or bilateral should be sought. Nasal tumors usually cause unilateral profuse nosebleeds, while benign causes of nosebleeds usually result in oozing and self-limited epistaxis. Nose picking or nasal or facial trauma should be excluded at this stage of the history-taking process.

Children with recurrent epistaxis should be evaluated for the possibility of a systemic cause of epistaxis such as congenital or acquired coagulopathy. Children might insert batteries into their nose which can cause severe trauma to the nasal mucosa.

In addition to epistaxis, children usually complain of mouth breathing and the presence of a headache during the nosebleed episode. History of sinusitis and allergic rhinitis can be elicited in a significant number of patients.

Medication usage history should be sought in children with epistaxis due to the association with NSAIDs, antihistamines, and corticosteroids.

Diagnostic Workup for Epistaxis in Children

Children with mild epistaxis who are otherwise healthy usually do not need any specific imaging studies except for a complete blood count to exclude anemia. Children with repeated and severe nosebleeds should be evaluated for the possibility of congenital or acquired coagulopathies. Prothrombin and partial thrombin time, factor IX, factor XII and thrombocyte counts should be determined.

Children with a positive history of a facial trauma should undergo a computed tomography scan which usually reveals an abnormality in up to 87% of the cases. The most common abnormalities include disruption of the nasal septum or the sinuses. Computed tomography scans of the nasal cavity are also helpful in excluding benign or malignant neoplasms.

Treatment of Epistaxis in Children

Children with a self-limited epistaxis episode who do not have any serious etiology and who are otherwise healthy can be managed conservatively, whereas children with severe bleeding are better off with primary treatment.

The first step in the management of an active nosebleed is to squeeze the nostrils together for 5 to 30 minutes without any interruption. The child should be instructed to breathe from his or her mouth. Unfortunately, many young children might not be co-operative enough to do this.

Head elevation without hyperextension should be attempted as another approach to stop the bleeding. This approach is usually successful in up to 90% of the cases. Hyperextension of the head can put the child at an increased risk of aspiration.

Non-cooperative children who cannot apply direct pressure to the nostrils might benefit from the placement of a gauze that is moistened with epinephrine solution of the ratio of 1:10,000.

Children with recurrent epistaxis due to dry and hot weather might benefit from humidifying the air with a cool-mist vaporizer or another method to increase the humidity of the air. During the active period of epistaxis, nasal oxymetazoline might be used to stop the bleeding. Oxymetazoline should not be used more than 5 days during an active episode of epistaxis.

Children with acute severe epistaxis that is not responsive to cauterization can be treated with nasal packing. Anterior nasal packing with a petroleum jelly gauze or merocel sponges can be attempted.

It is recommended to cover the used material for packing with an antibiotic ointment. The drawback of using nasal packing in children is the fact that they need to be placed and left for three to four days which might be intolerable by the child.

Some children might have severe uncontrolled nasal bleeding despite the previously mentioned therapeutic options. In that scenario, ligation of the external carotid artery, the internal maxillary artery, or the ethmoidal artery might be attempted. Inexperienced hands, arterial embolization of the previously mentioned potential bleeders might be a less invasive option than ligation.