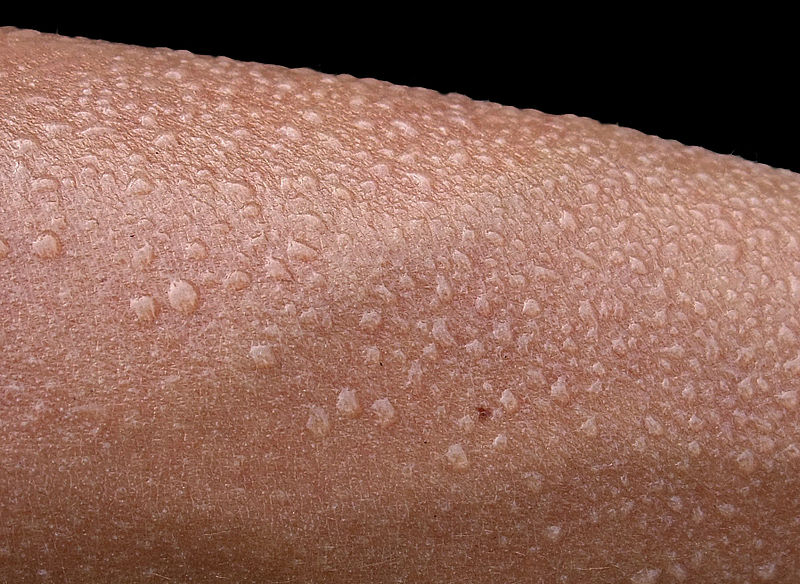 From a physical point of view, energy is the storage form of work. Energy is expressed in the unit of joules [J] (1 joule = N * m). It can exist in many different forms, including kinetic, thermal, and electrical forms. The unit of calorie [cal] is used to describe heat (thermal energy) and the energy value of food. The following applies: 1 cal equals 4,187 J.

In physics, the human energy metabolism is seen as power (energy/time) and is measured in watt [W] (1 watt = 1 J/s). Mostly, however, the whole day is taken into consideration, and value is given by J/day.

Note: When dealing with energy metabolism, you will often encounter questions that can be solved with simple unit conversion. 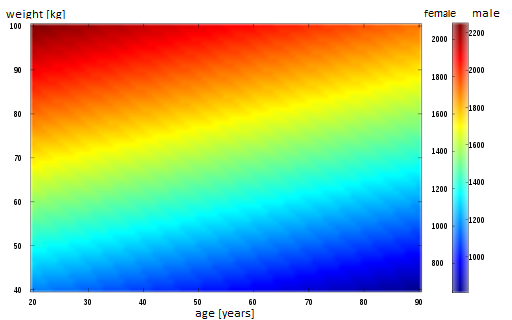 Image: “Base metabolism rate of men and women” by Shaddim, License: CC BY-SA 3.0

The measuring has to be carried out in the early morning because of the circadian rhythm of body temperature which, concomitant to the energy metabolism drops to a minimum during these hours.

Energy sources and their calorific value

To satisfy a human’s energy demand, and to maintain a constant energy balance, high-energy nutrients have to be utilized (or ‘burnt’). The energy is supplied by 3 essential food substrates – carbohydrates, fats, and proteins.

In food utilization, it affects only proteins, since people cannot use their entire energy (23 kJ/g) and excrete it in the form of unusable but energy-rich urea. Thus, the physiological calorific value is lower than the physical.

The act of measuring energy metabolism is called calorimetry. Direct calorimetry, through measuring the heat generated by a combustion reaction, is no longer used. In turn, indirect calorimetry is still widely used in sports medicine and occupational medicine. In this case, the consumed energy is calculated from the consumption of oxygen (O2).

Note: To estimate energy consumption, the caloric equivalent (CE) is multiplied with the consumption of oxygen. The CE of the mixed European diet is 20 kJ/L O2.

The caloric equivalent of 20 kJ/L of consumed oxygen applies to the Central European mixed diet and can vary depending on diet composition. Since the caloric equivalents for carbohydrates, fats, and proteins lie between 19 kJ and 21 kJ/L of O2, the possible error is minimal.

However, to achieve higher accuracy, one should identify the primary energy substrate based on respiration quotients (RQ). This refers to the ratio of emitted carbon dioxide CO2 to consumed O2 and lies between 0.7 and 1.0 (depending on the diet). The following table provides the RQs for the exclusive combustion of each substrate. The emission of CO2 is also estimated using open-circuit spirometry.

The imbalanced energy balance can increase or decrease the body weight and thus the body mass index (BMI). The elevation of the BMI can be a result of the increase in fat tissue during a long period of a positive energy balance, but can also reflect the increase in muscle mass of an athlete. If the BMI is greater than 30, there is a higher risk of cardiovascular diseases and diabetes mellitus, and therefore, a dramatically increased mortality rate. 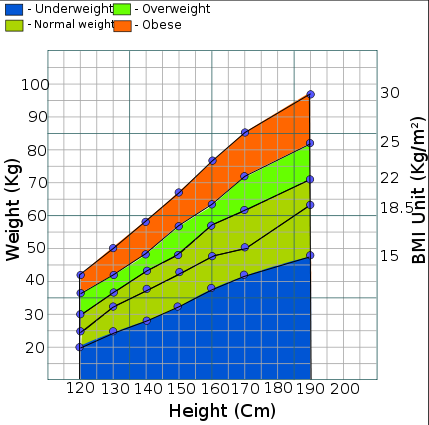 The proportion of various nutritional elements in a balanced diet should be based on the following: the recommended daily consumption of protein is 1 g/kg of body weight. This is called protein optimum, and it ensures the daily conversion of structural proteins.

The energy required by the human body should be provided to 50% of carbohydrates, 30% of fats and 10% of proteins. Alcohol often provides 5% of the daily energy requirement, but it should not, under any circumstances, cover a bigger percentage.

The reliable functioning of the human body depends on constant body temperature. There are different regulatory mechanisms to ensure and secure it, despite strongly altering external conditions.

The heat produced by combustion must be used, on the 1 hand, to stabilize a body’s temperature and, on the other hand, can be emitted to the environment if there is surplus energy. Normal body temperature is approx. 37°C, but varies depending on the circadian rhythm by about 1°C.

Regulation of the body temperature

The ability to maintain a constant body temperature of about 37°C is called thermoregulation, and the center of temperature regulation and metabolic regulation is in the hypothalamus. Both there, and in the periphery, are the cold receptors and the heat receptors (thermoreceptors), which convey their information to the thermoregulatory center. Here the so-called temperature setpoint is set, i.e. the temperature that the body is trying to maintain.

This reaction to mild hypothermia is called centralization. It prevents too much heat from being lost through the larger surfaces of the extremities. Therefore, in cold conditions, the temperature of the body periphery can differ from the core temperature by up to 9°C. From the outside, pale skin and bluish lips can be observed. In warm conditions, the vessels of the skin are dilated and perfusion of the periphery is increased. In this case, the temperature of the core, and the periphery, converges to a large degree.

Note: The best way to measure the core temperature is rectal measurement.

The range of temperature which is comfortable for humans, requires little effort from the thermoregulatory system, and can be maintained by normal blood circulation, is called indifference temperature. For an unclothed, resting person at a relative air humidity, it lies around 28–30°C. For a clothed person, around 22°C. Outside this zone, various mechanisms have to be used to ensure the constant body temperature of 37°C.

As a result of chemical reactions, especially combustion reactions, the human body produces heat. The heat generation of individual organs at rest, versus under stress, and their respective share of the total generated heat, differ strongly. In particular, muscle activity can significantly increase heat generation and provide a 90% share of heat.

In addition to the increasing urge to move one’s body in cold weather in the form of arbitrary muscle activity, heat can be also produced by shivering. This involuntary reaction reflectively activates antagonists, which results in no actual movement.

The well-perfused and energy-rich brown adipose tissue provides a form of heat generation that is of utmost importance for an infant. It is called non-shivering thermogenesis. The membrane protein thermogenic, or UCP-1 (= uncoupling protein 1), uncouples the respiratory chain. Thus, the breakdown of fatty acids is ‘short-circuited’ so that no adenosine triphosphate (ATP) is formed and all the energy in the form of heat will be emitted. Thus, stimulated by the beta-adrenergic receptors, the heat can be supplied very quickly.

Thermal conduction implies the emission of heat through the skin, while in direct contact with another material. As a result of this contact, a person loses heat, and the extent of this heat exchange largely depends on the material’s thermal conductivity. This is why highly conductive metal seems much colder to us than, let’s say, wood, and more heat is lost through conduction.

Convection, on the other hand, is the transfer of heat to a medium in motion– mostly air that surrounds us. The body surface warms the still layer of air, which then rises and is replaced by colder air. If the medium is in motion, the exchange accelerates, and thus the heat transfer increases, and this is why a perceived temperature is colder in windy weather. The loss of heat in a medium with higher conductivity (like water, for instance) is also greater. Under standardized conditions, about 15% of heat is emitted through convection.

In contrast to conduction and convection, no direct contact is involved in thermal radiation (infrared radiation). Everybody continually emits energy to the objects in the environment. The extent of this emission depends on the temperature differential. On average, about 60% of the heat of the human body is emitted through thermal radiation.

Evaporation is an effective mechanism of the human body which is also needed for emitting surplus heat, especially at ambient temperatures above 36°C, as it is the only 1 available. Sweating (perspiratio sensibilis) is a body regulated process that is influenced by cholinergic fibers of the sympathetic nervous system. Perspiration glands exclusively contain cholinergic receptors. Their neurotransmitter is acetylcholine.

The evaporation heat of water is 2400 kJ/L, which allows for a high level of heat emission, which is, however, limited by a high level of air humidity. If a person loses a great amount of low-electrolyte liquid through sweating, it can lead to hypertonic dehydration. Daily, the human body involuntarily loses up to 500 mL of liquids through evaporation from the skin and mucous membranes (e.g., of the airways). This phenomenon is called perspiratio insensibilis, and despite the lack of regulatory mechanisms, it contributes to heat emission even though it is largely imperceptible.

Note: The 4 mechanisms of heat emission are conduction, convection, thermal radiation, and evaporation. 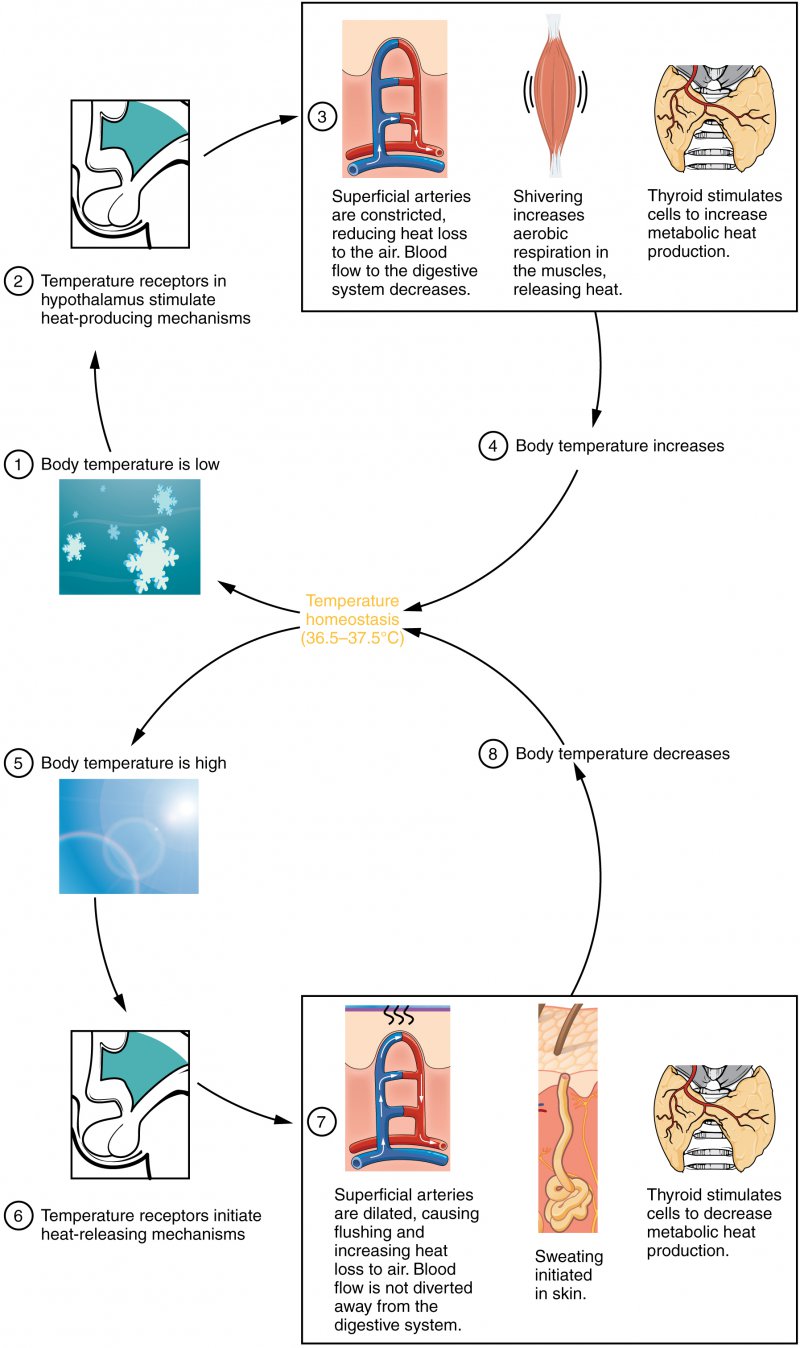 Hyperthermia occurs when the core body temperature increases due to, for instance, intensive physical stress and when the mechanisms of heat emission are insufficient. In the case of fever, however, the temperature setpoint increases in the centers of the central thermoregulatory network. This can have different causes. Mostly, bacterial inflammations are responsible for it, but it can also be a result of malignant processes.

The substances responsible for increasing temperature setpoints are known as a group of so-called pyrogens. The group of foreign, exogenous pyrogens consists of viruses and constituents of bacteria (polysaccharides), which, through the interaction with macrophages and granulocytes, lead to the release of the messenger substances of the immune system. These mediators, in turn, are known as endogenous pyrogens. The major endogenous pyrogens are interleukin 1 (IL-1), interferon, and tumor necrosis factor. At the end of the cascade are prostaglandins, which induce the increase of the temperature setpoint in the hypothalamus. 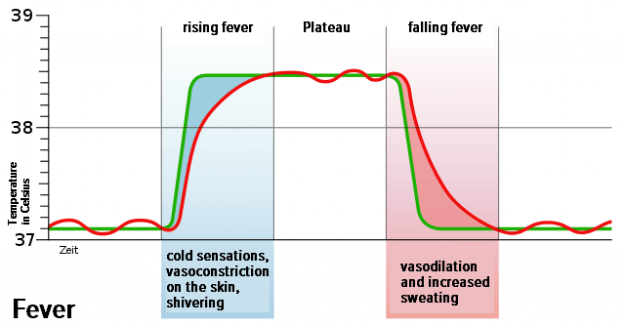 To assess the situation of a patient with fever, several clinical signs of rising or falling fever can be used. Patients with a rising fever experience strong cold sensations, vasoconstriction on the skin, and shivering, since the body core temperature is below the (increased) temperature setpoint. In contrast, a falling fever causes vasodilation and increased sweating. The medication that reduces fever is called an antipyretic and it works, like ibuprofen, for instance, by inhibiting prostaglandin synthesis.