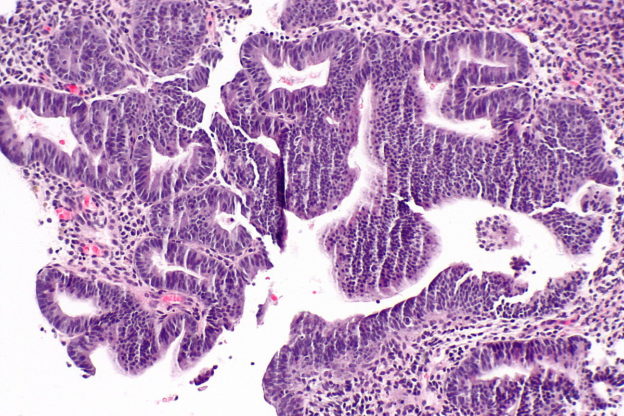 The incidence of endometrial hyperplasia is 133 women per 100,000 per year. Most cases occur after menopause, in women from 50 to 54 years of age. Atypical hyperplasia is seen most commonly in 60- to 64-year-olds. Estimates of incidence are believed to be low because many women do not report their symptoms or report only after symptoms remit.

Note for the United States Medical Licensing Examination (USMLE): It is important to know the list of the most common cancers in men and women. For gynecological cancers, cervical cancer is the most common in developing countries due to a lack of screening and vaccination against human papillomavirus (HPV). There are 25.4 new cases per 100,000 women per year, leading to death in 4.5 per 100,000 women per year. Women have a lifetime risk of 2.8%. The average age of diagnosis is between 55 and 67 years. Only 5% of cases occur in women younger than 40 years.

Obesity increases risk because of an excess amount of estrogen produced from the increased number of adipocytes. Adipocytes contain an enzyme called aromatase, which is crucial for the production of estrogen.

Note for USMLE: Lynch syndrome has an autosomal dominant inheritance. It is caused by mutations in DNA mismatch repair genes that lead to microsatellite instability (a repetitive segment of DNA). Carriers have an almost certain risk of colon cancer, and women have a risk of developing gynecological cancers of up to 40%.

Some studies have shown that the selective estrogen receptor modulator tamoxifen increases risk due to its estrogen partial agonist effect on the endometrium. However, a recent study from the Surveillance, Epidemiology, and End Results Program suggested that it does not increase overall risk.

The World Health Organization (WHO) has two classifications for endometrial hyperplasia:

Atypia is represented by nuclear enlargement, abnormal chromatin, and polymorphism. 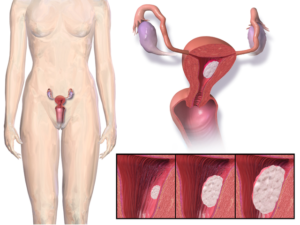 As a woman ages and reaches perimenopause and menopause, ovulation occurs less often or not at all. Due to the lack of ovulation, there is a loss of progesterone to counteract remaining estrogen. Estrogen then allows for increased and unopposed growth of the endometrium.

Abnormal uterine bleeding is the most commonly reported sign.

Types that present with atypia have the strongest association with progression to endometrial cancer.

Women with Lynch syndrome should be screened for endometrial cancer starting at age 35 because they have a high chance of developing the disease (up to 40%). If a woman has no further plans of having children, hysterectomy with bilateral salpingectomy is recommended.

History and physical examination may help to elucidate the etiology of the bleeding. A physical exam may be grossly normal and show no signs of malignancy. 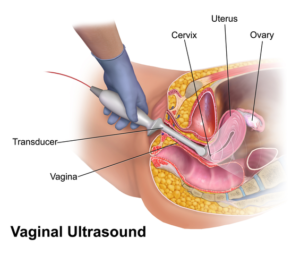 Initial tests can include transvaginal ultrasound to measure the endometrial thickness and to screen for any other potential causes. If the endometrium is deemed to be thickened (> 5 mm), an endometrial biopsy can be performed. Other biopsy methods can be performed in the operating room, including dilation and curettage (commonly referred to as “a D and C”) and hysteroscopy.

Pathology leads to a definitive diagnosis and is the best way to view changes in the endometrium. In the clinic, a pipelle is used to sample the endometrial tissue.

Type 1 endometrioid is responsible for 80% of endometrial cancers; fortunately, has a favorable outcome. Histology shows an increased gland-to-stroma ratio and can be referred to as adenocarcinoma because of the increased number and size of glands.

Mutations have been reported in p53, PTEN, PIK3CA, K-Ras, and β-catenin. 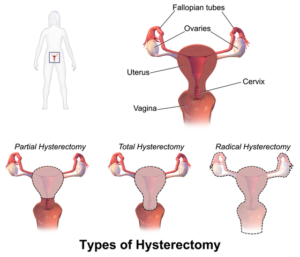 Progestin can be given orally or released from an intramuscular injection or intrauterine device (IUD). First-line therapy includes oral medroxyprogesterone. Mixed estrogen-progestin oral contraceptives can be used in some patients. Levonorgestrel IUDs, such as the Mirena, have been shown to be very effective in the treatment of endometrial hyperplasia and offer long-term contraception.

Endometrial hyperplasia with atypia has a greater risk of progressing to cancer. If future pregnancy is not desired, then hysterectomy is the best and definitive treatment. In postmenopausal women, bilateral salpingo-oophorectomy is recommended.

An intramuscular depot medroxyprogesterone (Depo-Provera) injection four times a year has shown to be effective. Again, IUDs such as Mirena can be used as well.

When metastases are possible, chemotherapy drug cisplatin has been shown to be effective.

Overall, with treatment, patients with endometrial cancer have a 5-year survival rate of 83%.

Leave a Reply to Cindy Fong

One thought on “Endometrial Hyperplasia — Diagnosis and Treatment”