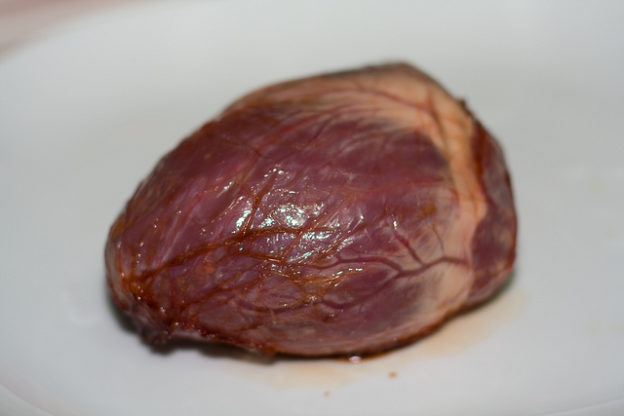 Embryologic Basis of the Heart

The development of the heart is based on the trifoliate cotyledon. This consists of the upper ectoderm, mesoderm, and lower-lying central endoderm. One can imagine it as 3 layers of a disc, where the ectoderm is located in a fluid-filled bladder, the amniotic cavity. The endoderm, however, is attached to the yolk sac.

Within the mesoderm, a notochord is formed, which first develops a groove, and then forms a tube. The notochord is the preliminary axis of the embryo. If you would from the yolk sac to the endoderm, you would see the center as notochord axial strips, laterally thereof the endoderm extends.

The part that is located cranial to the notochord is called a precordial plate. Gradually, the endoderm is pushed over the notochord and merged again so that they will be moved into the mesoderm, which is also located between the ectoderm and endoderm.

At the same time, on the ‘other side’ – in the ectoderm, neurulation (= formation of a neural fold, which closes itself to the neural tube) takes place.

Thereafter, the so-called lateral and vertical folding of the germinal layer occurs, which results in large cell rearrangements. One result of the lateral folding is the formation of an intraembryonic body cavity, the celomic cavity. The parietal layer of the mesoderm and a subsequent layer of the ectoderm restrict it. The endoderm closes cranial and caudal to the intestinal tube, which is opened toward the yolk sac.

The so-called cardiogenic zones, where the original cells of the heart are located, are in front of the precordial plate. Paired and lateral heart tubes, through lateral folding, give rise to an unpaired primitive heart tube, which is located at the bottom of the celomic cavity.

The mesoderm surrounding the heart tube later becomes the myocardium.

Through looping and septation of the heart, internal spaces develop thereafter.

The heart tube begins to elongate and experience warping in the 4th week of development so that a loop-like structure forms in the tube. Local area-wise expansion of the lumen occurs. Caudally to cranially, spaces form as follows:

The truncus arteriosus represents the precursor of the ascending aorta, as well as the truncus pulmonalis. Both structures, the bulbus, and truncus form the porta arteriosa and are thus considered the (smooth-walled) outflow tract of the left and right ventricles.

At this stage, the cardiac loop sections are very similar to those in the newborn heart. However, the 4 cavities of the heart are not yet formed.

Development of the Internal Cardiac Cavities

A narrow passage, called the atrioventricular canal, is located between the primitive atrium and ventricle. On the wall, two opposing thickenings occur – the so-called endocardial cushions. They fuse together, causing a breakdown in the right and left portions.

Within the primitive ventricle, a muscle bar, which later represents the pars muscularis of the interventricular septum, begins to move cranially from its caudal position. The 2 developing chambers are not yet completely closed. Initially, an interventricular foramen remains cranially.

In the subsequent processes, the cone bead covers this opening and denotes a membranous portion of the interventricular septum.

The separation of the atria begins with the formation of the septum primum, which initially grows from the ceiling of the primitive atrium. Additionally, another muscle bar pushes up from the endocardial cushion and fuses with it.

Another opening exists, the foramen primum, which gradually closes, while the septum primum is opened above. This second, open space is called the foramen secundum.

Another septum secundum forms analogous to the septum primum, and, while it conceals the foramen secundum, it also has its own opening. This is the foramen ovale, which is covered by the adjacent septum primum; thus, 2 openings exist, each in the 2 septa.

This short circuit between the left and right atria is necessary prenatally because the pulmonary circulation is not yet functional. The bloodstream can be maintained this way. After birth, when the high and low-pressure areas are forming, the septa are pressed against each other, so that the foramen normally closes functionally. 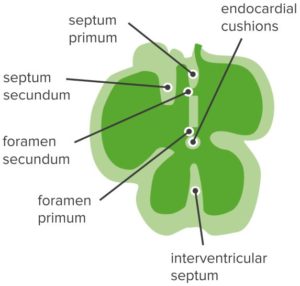 Netter, T. H., &Yonkman, F. F. (1992). The Ciba collection of medical illustrations volume 5: A compilation of paintings on the normal and pathologic anatomy and physiology, embryology, and diseases of the heart. West Caldwell, NJ: Ciba.