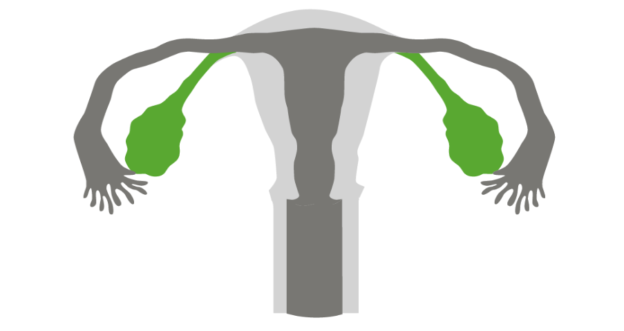 When ovulation occurs, omega-6 fatty acids begin building up in the phospholipids of the cell membranes of the uterus. Progesterone withdrawal right before menstruation is a normal physiologic occurrence and is responsible for the release of omega-6 fatty acids, especially arachidonic acid. The release of these fatty acids triggers the activation of prostaglandins and leukotrienes in the uterine wall, which initiates an inflammatory response. This response is responsible for the localized symptoms of dysmenorrhea such as abdominal pain and cramps. Systemic symptoms such as nausea and vomiting in addition to a headache are also common.

Additionally, girls with primary dysmenorrhea were found to have higher levels of serum vasopressin, another potent inducer of uterine contraction during menstruation. Continued contraction of the uterine muscles leads to oxygen deprivation that induces severe cramps and pelvic pain.

Another important cause of dysmenorrhea that is more specific to the adolescent age group is the presence of a Mullerian duct anomaly. Didelphic uterus with unilateral obstruction, imperforate hemivagina, and the presence of a vaginal septum are all possible anatomical anomalies that can lead to dysmenorrhea during the early adolescent years. Sexually active adolescents may also experience an ectopic pregnancy, which can present with acute abdominal pain and vaginal bleeding. This acute presentation should be differentiated from the recurrent abdominal cramps that are characteristic of true dysmenorrhea.

The presentation of primary dysmenorrhea in an adolescent is characterized by low abdominal cramping. Other associated symptoms include headaches, nausea, and vomiting. The symptoms are cyclic and usually begin at the onset of the menstrual flow, lasting for 1 to 2 days.

Sexually active adolescents who present with chronic pelvic pain, dysuria, and dyspareunia may have a chronic pelvic inflammatory disease. Pelvic examination can reveal cervical motion tenderness or cervical fragility, both of which are clear signs of pelvic inflammatory disease. As well, the possibility of an ectopic pregnancy should be excluded in any sexually active adolescent who presents with acute abdominal cramping pain and vaginal bleeding.

Proper history taking and physical examination are usually sufficient to establish the diagnosis of dysmenorrhea, but a few points need to be taken into consideration, as the difference between primary and secondary dysmenorrhea is essential as the treatment may differ.

The next step is to understand whether the dysmenorrhea is purely cyclic, acyclic, or both. Purely cyclic dysmenorrhea is very likely to be a primary condition and is unlikely to uncover any pelvic pathology. Purely acyclic chronic pelvic pain can be caused by a chronic pelvic inflammatory disease. Patients with both cyclic and acyclic dysmenorrhea most likely have endometriosis. Pelvic ultrasonography is required to confirm the diagnosis of endometriosis.

The most common sites of endometrial tissue location include the ovaries and the cul-de-sac, which can be easily visualized and examined with a proper pelvic ultrasonographic scan. Ultrasonography can also help exclude anatomical anomalies of the uterine cavity or the Mullerian ducts, which contribute to a considerable number of dysmenorrhea cases in young adolescents.

The most commonly used medications for primary dysmenorrhea in adolescents are ibuprofen, naproxen, mefenamic acid, and celecoxib. These four medications belong to the non-steroidal anti-inflammatory drugs family, except for celecoxib, which is a specific COX-2 inhibitor. The efficacy, safety, and tolerability of all these medications are similar.

Oral combined contraceptive pills are also considered as first-line therapy for the management of primary dysmenorrhea in adolescents. Seasonale, Seasonique, and Lybrel have been all used with excellent results in adolescents with dysmenorrhea. The active ingredients in these medications are levonorgestrel and ethynyl estradiol.

If endometriosis implants are visualized by laparoscopy, they should be removed or obliterated by laser vaporization. Low-dose monophasic oral contraceptives can also be administered to adolescents with endometriosis in a non-cyclic fashion. Medical management of endometriosis also includes the administration of nafarelin and leuprolide, both of which are gonadotropin-releasing hormone receptor (GnRH) agonists. GnRH agonists should be avoided whenever possible, however, in young adolescent girls. Aromatase inhibitors can be also used in adolescents with endometriosis-associated dysmenorrhea, but they should be combined with a progestin to prevent the development of ovarian folliculogenesis.