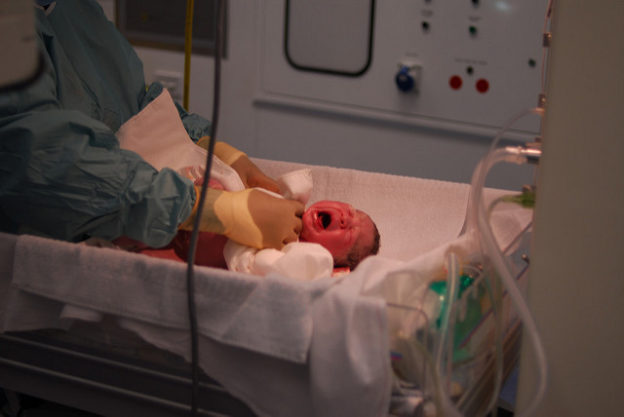 Atresia is a complete obstruction of the lumen of a hollow viscus.

Duodenal atresia is a congenital defect of the gastrointestinal tract characterized by the complete absence of the lumen of the duodenum (the first part of the small intestine). This makes the absorption and passage of food through the digestive canal impossible, causing duodenal obstruction.

In duodenal stenosis, there is partial narrowing (stenosis) of the duodenal lumen. It is associated with variable and delayed manifestations, followed by concealed symptoms at the beginning, and may last up to adulthood.

The exact etiology of duodenal atresia is not known as the most cases are sporadic. However, it is suggested that during the early weeks of gestation (6th and 7th week), the endodermal epithelium proliferates, and the portions of the gastrointestinal tract lumen become occluded. The recanalization normally occurs during 8 – 10 weeks of gestation, and the lumen patency is restored. The failure to recanalize due to any reason results in atresia. One of the suggested reasons for the recanalization failure is hypoxia of the fetus during the early stages of embryogenesis (ischemic episode).

Duodenal atresia is a relatively common congenital anomaly of the gastrointestinal tract occurring in 1 in 2,500-40,000 live births. One-Third of these cases are associated with Down syndrome (trisomy 21). There is no racial or gender propensity, with equal incidence in both males and females.

There is a pattern for intrinsic inborn duodenal obstructions:

Presentation of Patients with Duodenal Atresia 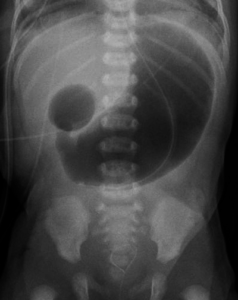 In 85% of the cases of complete duodenal atresia, bilious vomiting occurs during the first hours of life. The color of the vomitus is yellowish-green, sometimes with brown granular matter. In the rest of the cases (15%), the vomiting may be non-bilious as the atresia occurs proximal to the ampulla of Vater.

On physical examination, the abdomen is sunken (scaphoid abdomen). There may be epigastric fullness due to distension of the stomach and proximal duodenum. Although the bowel movements are absent due to high intestinal blockage, the meconium passage is not affected during the first 24 hours after birth. The affected newborn may be small for his/her gestational age.

The congenital intestinal defects that are associated with bilious vomiting and the time of manifestation are:

Partial duodenal atresia (stenosis) symptoms depend on the severity of the defect. The illness may not show any symptoms for months or even years and usually manifests with long-lasting vomiting, constipation, food aspiration and failure to thrive. The constipation is unresponsive to treatment.

The duodenal atresia or stenosis may be an isolated finding, but most commonly they are associated with other congenital defects such as: 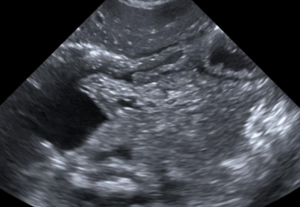 Radiography is an informative method of examination in duodenal atresia. It finds the dilated stomach and the first part of the duodenum (‘double bubble’) and the absence of air behind the second bubble. This finding of a double bubble sign with no distal gas strongly suggests duodenal atresia.

Barium enema examination is an additional study that makes distant duodenal atresia, as well as malpositioned cecum, evident. However, in the diagnostics of malrotation and volvulus, barium enema is not that informative.

There is no conservative treatment available for this condition.

In spite of the benign prognosis after the surgery, 22% of babies may develop distant complications:

Duodenal Atresia or Stenosis via rarediseases.org

Bilious Vomiting in the Newborn: Rapid Diagnosis of Intestinal Obstruction via aafp.org