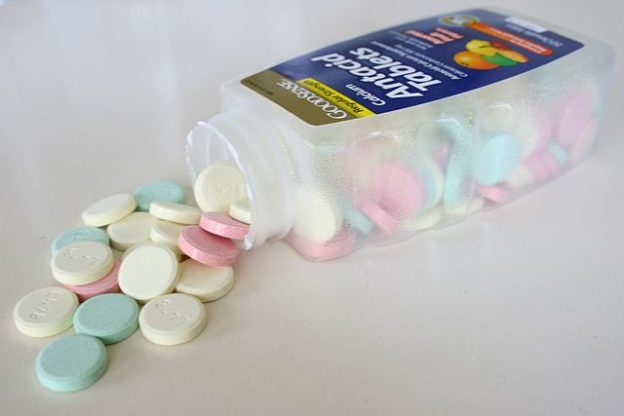 Acid peptic diseases are a group of disorders that involve erosion or ulceration of the mucosal lining of the gastrointestinal tract. Examples include gastroesophageal reflux disease (GERD), gastric and duodenal peptic ulcers, non-ulcer dyspepsia, and stress-related gastric mucosal injury. The use of NSAIDs (nonsteroidal anti-inflammatory drugs) and H. pylori infection account for approximately 90% of peptic ulcers. 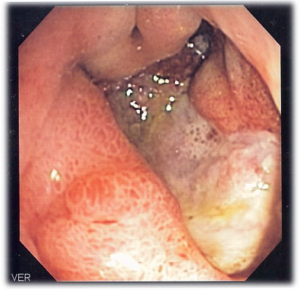 A relative imbalance between damaging and defensive factors of the gastrointestinal mucosa is important in the pathogenesis of peptic ulcer disease (see image).

In the stomach, acid (H+) is secreted by the proton pump (H+/K+-ATPase) located on the canalicular surface of the parietal cells in the gastric mucosal lining.

Antacids are weak bases that reduce gastric acidity by reacting with gastric hydrochloric acid (HCl) and thereby forming salt and water. Many antacids are available as over-the-counter formulations; however, the acid-neutralizing capacities of different formulations are highly variable.

Antacids should not be taken within two hours of the consumption of iron, tetracyclines, fluoroquinolones, and itraconazole, as they interfere with the absorption of these drugs.

All H2 blockers, except nizatidine, undergo significant first-pass hepatic metabolism. They are all (except nizatidine) available in intravenous-administration formulations. Famotidine is the most potent H2 blocker. Dose reduction is required in moderate-to-severe renal insufficiency and in possibly severe hepatic insufficiency.

H2 blockers are very safe. Adverse effects include the following:

With high doses or prolonged use, cimetidine can cause antiandrogenic side effects such as gynecomastia or impotence in men and galactorrhea in women by inhibiting the binding of dihydrotestosterone to androgen receptors, inhibiting estradiol metabolism, and increasing serum prolactin levels.

Cimetidine prolongs the half-lives of drugs such as warfarin, phenytoin, and clopidogrel by interfering with hepatic cytochrome P450 pathways.

Proton pump inhibitors (PPIs) are lipophilic weak bases that are administered as inactive prodrugs and in delayed-release formulations. A PPI is absorbed from intestinal mucosa and diffuses readily into parietal cell canaliculi, where it becomes protonated and is concentrated by Henderson-Hasselbalch trapping. Here, it is converted into its active form, which irreversibly inactivates H+/K+-ATPase.

PPIs are usually administered approximately one hour before a meal; their acid-inhibiting effects last for about 24 hours, and maximum effectiveness is achieved after 3–4 days of administration. PPIs undergo hepatic metabolism but have negligible renal clearance; hence, dose reduction is not required in renal insufficiency or in mild-to-moderate hepatic dysfunction.

PPIs inhibit both fasting- and meal-stimulated acid secretion and inhibit 90%–98% of a 24-hour acid secretion; they are therefore very effective in the management of gastrinoma and other conditions with acid hypersecretion compared with other classes of drugs.

By reducing acid secretion, PPIs may reduce the absorption of vitamin B12 and calcium; hypomagnesemia has also been reported. Patients requiring long-term PPI treatment and who are at risk of osteoporosis should be monitored for bone density and given calcium supplements.

Approximately 3% of patients taking PPIs develop hypergastrinemia, which normalizes within 4 weeks of stopping the drug. Enterochromaffin-like cell hyperplasia has also been reported, but carcinoid tumor formation has not been observed. Small benign gastric fundic gland polyps have been seen in some patients following long-term PPI intake.

Important drug interactions include the following:

Although antacids provide faster symptom relief, their effects are shorter lasting (1–2 hours) than those of H2 blockers (6–10 hours).

PPIs are more effective than H2 blockers in the management of gastroesophageal reflux disease; once-daily dosing is effective in approximately 85%–90% of patients. Long-term daily maintenance of PPIs is required in patients with erosive gastritis or esophageal complications of GERD, while those with an extraesophageal complication of GERD should be treated via twice-daily PPI administration for at least three months.

Both 14-day and 10-day regimens should be followed by a PPI once daily for 4–6 weeks to ensure complete healing of the ulcer.

Prevention of Bleeding from Stress-Related Gastritis in Critically Ill Patients

For patients without nasoenteric tubes or with significant ileus, intravenous H2 blockers are preferred over intravenous PPIs because of their cost-effectiveness and proven efficacy; continuous infusion is preferred over bolus administration.

In patients with nasoenteric tubes, immediate-release oral omeprazole is preferred over intravenous H2 blockers because of their cost-effectiveness and ease of administration.