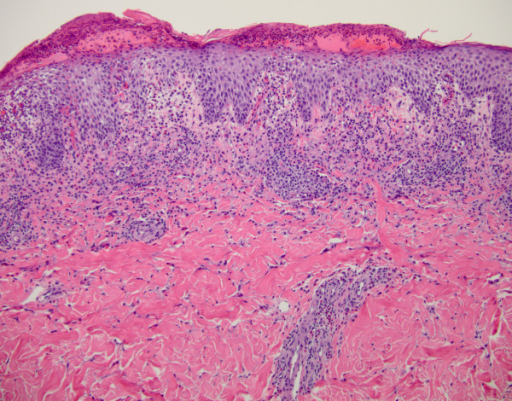 The term “drug reaction with eosinophilia and systemic symptoms (DRESS)” is used to describe an immune-mediated reaction to a drug that the patient is receiving. In the past, the R in DRESS stood for “rash” but this was changed in the most recent definition of the disorder to “reaction” because the cutaneous symptoms have been found to be diverse and not limited to a rash. The syndrome is characterized by a severe idiosyncratic reaction to a drug that is associated with systemic symptoms such as fever.

The incidence of DRESS is estimated to be around 1 case per 1000 exposures to drugs. The syndrome has been previously linked to certain antiepileptic medications, such as hydantoin and carbamazepine, but is now being more commonly recognized as a reaction to many other drugs.

DRESS has been described in children and adults. Patients usually have a family history of Stevens-Johnson Syndrome, DRESS, or other severe reactions to drugs. Due to the involvement of multiple organ systems, such as the liver, lungs, kidneys, heart, and pancreas, the condition carries a very high mortality rate that can reach as high as 20%.

The most common cause of death in patients with DRESS is an acute fulminant hepatic failure. Due to our incomplete understanding of the pathogenesis of the condition, the current treatment options are mainly supportive and the prognosis remains grim.

The exact etiology of DRESS is unknown, but antiepileptic medications have been historically linked with severe drug reactions that were later considered as DRESS. Patients who lack certain detoxifying enzymes due to genetic deficiencies are prone to the accumulation of drug metabolites. These metabolites can be cytotoxic and can induce apoptosis. This is believed to trigger an immune-mediated response that activates eosinophils and causes eosinophilia. Additionally, the inflammatory response is activated by the increased production of interleukin-5 from activated T-cells. 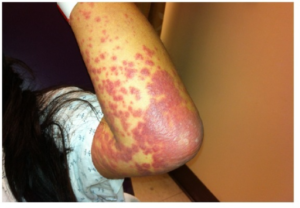 Increasing evidence of the immunologic basis of DRESS stems from the fact that the syndrome has been linked to different human leukocyte antigen polymorphisms. For instance, HLA-B*1502 has been linked to an increased risk of severe reactions to carbamazepine.

Other scientists have noted that patients with DRESS have a reactivation of certain viral agents, such as the Epstein-Barr Virus and the herpesviruses (HHV-6, HHV-7, and cytomegalovirus). Reactivation of these viruses happened at the time of the clinical onset of the systemic symptoms of DRESS.

The main distinctive feature of DRESS and other typical adverse drug reactions is the longer duration between the onset of the symptoms and the introduction of the triggering drug. Patients usually present two to eight weeks after the introduction of a new drug; very commonly an antiepileptic medication in someone with epilepsy. 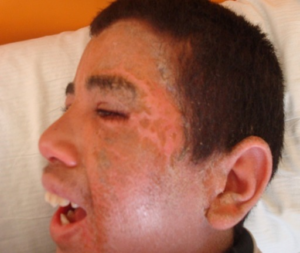 Patients usually present to the clinic with fever, rash, and lymphadenopathy. The rash is described as a maculopapular eruption with wheels, vesicles, bullae, pustules, and redness. Facial edema can be also seen.

A recent study aimed to differentiate between the different triggering drugs of DRESS based on the clinical picture of the syndrome. They noted that lamotrigine is more commonly associated with fever and toxic epidermal necrosis. Patients who receive allopurinol can present with DRESS that is characterized by eosinophilia and systemic symptoms without a fever, and finally, minocycline is more likely to be associated with peripheral lymphadenopathy and heart involvement.

DRESS is mainly a clinical diagnosis. Regardless, laboratory investigations still provide very valuable information to confirm the diagnosis of DRESS.

RegiSCAR diagnostic criteria for DRESS include the presence of three of the major criteria and any of the supporting criteria to make the diagnosis of DRESS. The major points are a fever above 38 °C, lymphadenopathy in at least two distinct sites, the involvement of at least one internal organ such as the liver, heart, lung or kidneys and the presence of an abnormality on the blood count.

The most common blood abnormality is eosinophilia, followed by elevated monocytes, followed by elevated or decreased lymphocytes and finally can be thrombocytopenia. The presence of an acute rash is no longer part of the major diagnostic criteria for DRESS but is considered as a supportive criterion.

The diagnosis of DRESS was made by the presence of at least 7 of the diagnostic criteria for DRESS:

Patients at an increased risk of developing the syndrome can undergo a skin patch test with the injection of the drug within the skin. It was noted that patients who develop DRESS syndrome usually have a positive skin patch test to the suspected drug.

The first step in the management of DRESS is to withdraw the suspected triggering drug. Early drug withdrawal has been linked with a better prognosis and perhaps is the only treatment option that might have an impact on the prognosis of the patient. 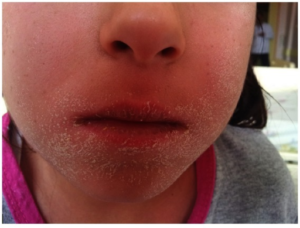 After the discontinuation of the offending drug, patients should receive supportive therapy. Immunosuppression is commonly used in patients with DRESS syndrome, but the effectiveness of this approach has not been scientifically proven yet. The most commonly used immunosuppressive medications are corticosteroids and cyclosporine.

Because of the limited treatment options for DRESS, the prediction of who might develop the condition and the primary prevention of the syndrome remains the only hope to save lives that can be lost due to the condition. Genetic testing of the HLA genes, combined with skin patch testing, are promising techniques for the detection of high-risk patients for the development of DRESS.