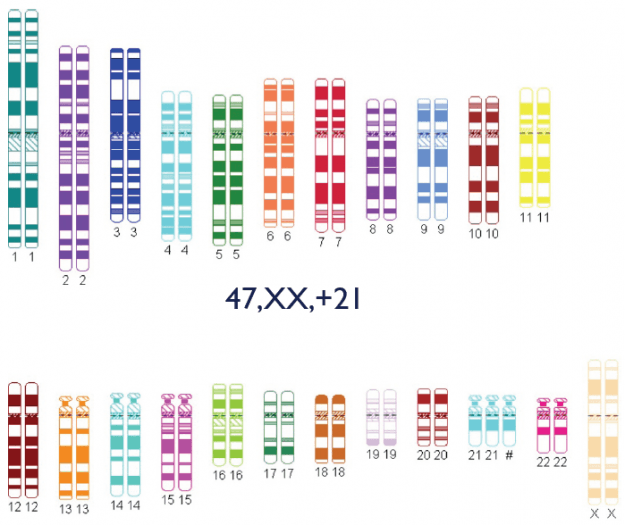 Down syndrome as a mental and physical handicap 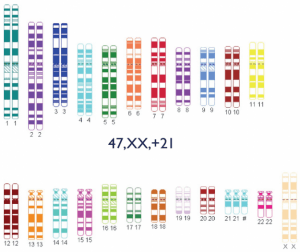 Trisomy 21, also known as Down syndrome, is a chromosomal aberration that leads to the presence of 3 copies of chromosome 21.

In trisomy 21, patients show delayed or impaired mental and physical development. The syndrome is named after the English physician J. Langdon Down who first described the disease in 1866.

Down syndrome in the population 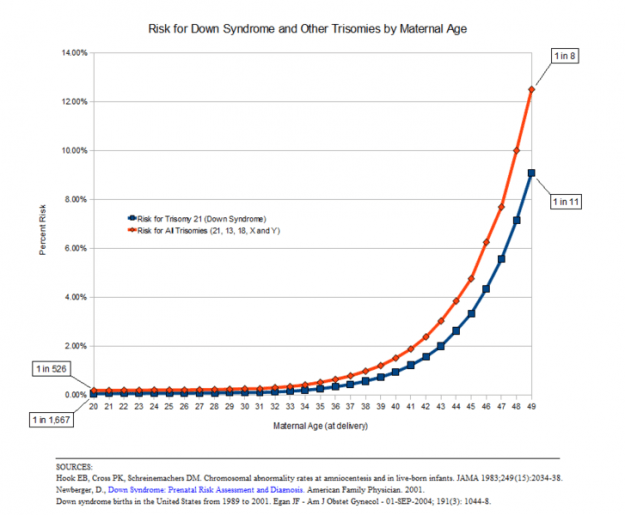 Image: Graph showing the risk (as a percentage of live births) of Down syndrome, along with other trisomies, by age of the mother (at delivery). By: Tdadamemd. License: CC BY-SA 3.0

With a prevalence of 1 in 700, trisomy 21 is the most common autosomal chromosome aberration. It is also the most frequent genetic cause of mental retardation in humans. Life expectancy in those with this condition is currently about 50 years and tends to increase due to improved therapeutic options.

Note: The older the mother, the higher the risk of trisomy 21!

Causes of Down syndrome

The underlying cause of the condition is a trisomy — a triple set of chromosomes. In Down syndrome, there is an extra chromosome 21, resulting in 3 instead of 2 chromosomes. On a cytogenetic level, the following possibilities could lead to trisomy 21.

Free trisomy 21: In >90% of all cases, the surplus chromosome 21 is free. This is caused by non-separation and is usually of maternal origin (dependent on the age of the mother; chromosome number: 47).

Trisomy 21 due to translocation: In approx. 2–4% of all cases, the surplus chromosome 21 is attached to another acrocentric chromosome (often 14) (Robertsonian translocation). The age of the mother does not have any influence in this scenario (chromosome number: 46). 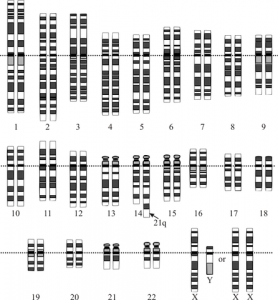 Trisomy 21 in mosaic: In 1–2% of all cases, there is the simultaneous existence of a normal cell line and another with trisomy; the phenotype depends on the distribution pattern in the brain.

Partial trisomy 21: Very rare, duplication of one segment of chromosome 21.

Trisomy 21 due to translocation occurs de novo (by mutation) or is inherited. Here, it is possible that the parents are carriers of a balanced translocation, with a well-balanced genotype and without any clinical symptoms. If the father is a carrier of the translocation, the empirical risk of recurrence (likelihood of an ill child) is approx. 1–2%. If the mother is a carrier, the risk increases to 10–15%. With a translocation of chromosome 14, the maternal karyotype is 46, XX, t(14;21). 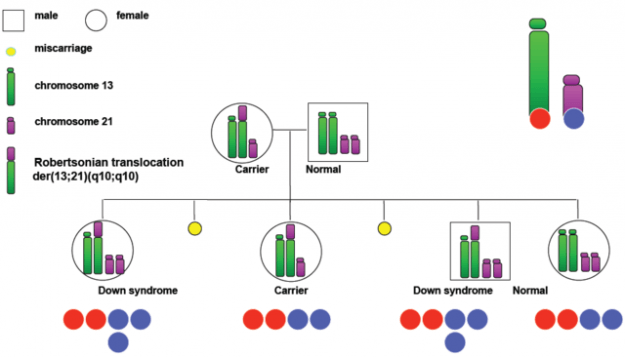 Symptoms of Down syndrome

Image: A cropped photo of the eyes of a baby with Down syndrome. Brushfield spots are visible between the inner and outer circle of the iris. By: Szymon Tomczak. License: CC0 1.0

While there is no difference between the symptoms of a free trisomy and those of a trisomy due to translocation, the degree of manifestation of a mosaic trisomy depends on the number of cells with trisomy.

Phenotype of Down syndrome

Patients with Down syndrome have a characteristic outer appearance with the following dysmorphic features that can occasionally be found in the normal population. 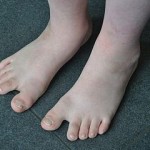 Image: Feet of a 10-year-old boy with Down syndrome, with the typical large space between the large toe and second toe. By: Loranchet. License: CC BY 3.0

Note: The mentioned abnormalities can also be found in the normal population and are hence not specific for Down syndrome!

Organic malformations in Down syndrome 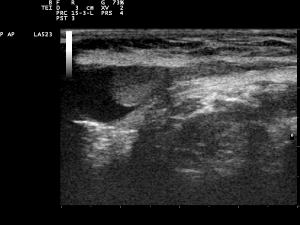 In addition to changes in the exterior, the organs can also be malformed. Patients with Down syndrome can have hypothyroidism. Furthermore, males, unlike females, are mostly infertile and exhibit cryptorchidism.

Concerning the intestinal tract, duodenal atresia and Hirschsprung’s disease are common. Other possibilities include atresia of the esophagus or anus as well as malformation of the bile duct and pancreas.

Mental retardation in Down syndrome

The IQ of patients with trisomy 21 lies between 20 and 50. The mental retardation can, however, vary considerably in its severity. Usually, it is possible for patients to learn how to read and write so that in some cases, the possibility of an autonomous life exists.

Postnatal diagnosis of Down syndrome

It is, however, necessary to confirm the diagnosis via cytogenetic examinations (analysis of the karyotype) in order to diagnose or rule out Down syndrome. It is also important to determine the underlying type of trisomy 21 in order to assess the risk of recurrence (see above), among other things.

Prenatal diagnosis of Down syndrome

The triple test is used between the 16th and 20th weeks of pregnancy. The triple test measures the blood serum levels of the mother and compares them to reference values of other pregnant women in the same week of pregnancy. The test includes β-hCG, α-fetoprotein, and estriol. If those values differ from the standard (β-hCG high, α-fetoprotein, and estriol low), trisomy 21 can be suspected. This test is, however, not specific for Down syndrome and is susceptible to errors. It is also necessary to calculate the exact gestational age for a conclusive comparison.

Sonography could be used to detect malformations like a flat face, macroglossia, shortened femur, lack of ossification of the nasal bone, shortened fingers, dilated renal pelvis, or heart defects. These malformations are associated with trisomy 21 but cannot always be interpreted as a manifestation of a disease. Sonography can thus yield false-positive or false-negative results.

Sonography of fetal nuchal translucency (subcutaneous tissue between the neck and cervical spine) in the 11–14th weeks of pregnancy is also indicative of Down syndrome. However, this finding is also not specific to trisomy 21. 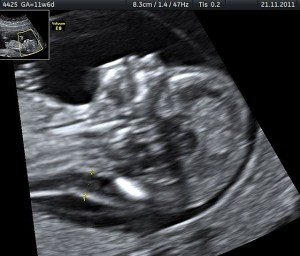 If non-invasive examinations like sonography or the triple test show noticeable findings, invasive examinations like amniocentesis and chorionic villus sampling should be considered. For this procedure, the fetal or placental cellular material is extracted and chromosomal analysis is performed. Both methods can diagnose trisomy 21 with a high degree of certainty. They are, however, known to be associated with an increased risk of miscarriage.

Treatment of Down syndrome

Organic malformations have to be treated symptomatically. For example, hypothyroidism can be treated by substituting thyroxine; congenital heart diseases can be treated surgically in order to considerably increase the quality of life. Physiotherapy (as early as possible) can mitigate the extent of muscular hypotension.

It is also essential to encourage the affected children and to treat them with adequate care. Hence, they need a loving environment as well as medical and psychosocial care. Caring for a child with Down syndrome is often a special challenge for the parents, so it can be helpful for such parents to join self-help groups. The accessibility of a social pediatric center is also useful.

Medical check-ups are important for patients with trisomy 21. It is crucial to watch out for abnormalities of the gastrointestinal tract and heart in newborn babies and infants. It is also necessary to detect eye diseases like cataract and strabismus as early as possible in order to prevent additional handicaps due to visual impairment.