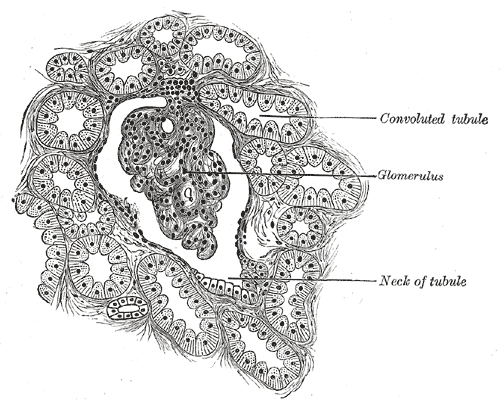 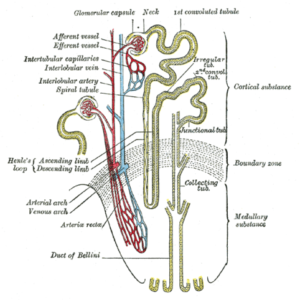 The distal convoluted tubule (DCT) is the smallest portion of the duct system (only 5 mm). It starts from macula densa. It is formed by a simple cuboidal epithelium. These cells are less active than those of the proximal convoluted tubules with few microvilli on the apical surface. The main functions of the DCT are the regulation of potassium, sodium, and calcium ions and the maintenance of pH. DCT cells are highly packed with mitochondria. They have a large amount of Na+-K+ ATPase on the basolateral membrane and are impermeable to water and urea. These cells also have a prominent thiazide-sensitive sodium chloride cotransporter, which is a target of many diuretic drugs.

The cells of the DCT are responsible for magnesium reabsorption by a transient receptor potential channel (TRPM6). DCT cells are also permeable to Ca via the TRPV5 channel. The basolateral surface has an ATP-dependent Na+-K+ antiporter pump. Angiotensin II and aldosterone also target DCT cells.

Functions of the Distal Convoluted Tubule

It absorbs sodium and secretes potassium. Sodium is being absorbed by the hormone aldosterone. Sodium and chloride are reabsorbed by a group of kinases called WNK kinases. There are four different kinds of WNK kinases: WNK1, WNK2, WNK3, and WNK4. Water and urea are not absorbed in the DCT, nor is it under the regulation of aldosterone for water absorption.

It reabsorbs calcium by the action of the parathyroid hormone. Arginine vasopressin receptor 2 is also expressed on DCT cells.

Thiazide diuretics mainly act on the thiazide-sensitive Na-Cl cotransporter and block it, thus inhibiting the reabsorption of sodium and chloride.

Histology of the Distal Convoluted Tubule

The DCTs are lined with simple cuboidal epithelium, which is relatively smaller than that of the proximal convoluted tubule. The lumen appears larger due to an absence of microvilli. 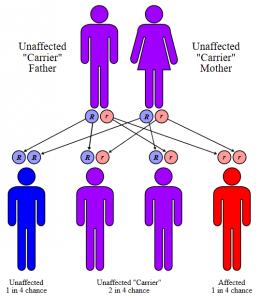 Gitelman syndrome is an autosomal recessive disorder caused by genetic mutations that result in defective functioning of the thiazide-sensitive sodium chloride symporter, which is located in the DCT of the kidney. This disorder is characterized by low blood levels of potassium and magnesium, decreased excretion of calcium in the urine, and elevated blood pH. This alters the electrolyte concentrations and causes leakage of extracellular fluid volume, which leads to the appearance of symptoms of dehydration. It is a salt-wasting disorder. The disease is similar to the metabolic abnormality caused when an individual is treated with high doses of thiazide diuretics.

Pathophysiology of the Gitelman Syndrome

The disease has an autosomal recessive pattern of inheritance, and 80% of the individuals affected by Gitelman syndrome have mutations in the SLC12A3 gene. This results in loss of function of the encoded thiazide-sensitive sodium chloride cotransporter. More than 180 types of mutations in this transporter have been identified so far. When this transporter is inactivated, the Na+-K+ ATPase continuously acts on the basolateral membrane. This creates a favorable sodium gradient across the membrane, which increases the reabsorption of other divalent ions by secondary active transport. It increases the reabsorption of Na and causes hyperabsorption of Ca in the proximal tubules.

Epidemiology of the Gitelman Syndrome

Signs and symptoms of the Gitelman Syndrome

Treatment of the Gitelman Syndrome

Most of the patients with Gitelman syndrome remain asymptomatic. The main goal of treatment is to replace potassium and magnesium, which are being lost. Large doses of potassium and magnesium are required to maintain normal levels of these ions in the blood. Diarrhea is a common side effect of oral magnesium supplementation, which is usually given in 3 to 4 divided doses in a day for better tolerance.

If electrolyte loss is severe, these ions can also be given by the intravenous route. If oral supplementation is not sufficient, aldosterone antagonists, such as spironolactone or eplerenone, can be given. Epithelial sodium channel blockers, such as amiloride, can also be given to decrease urinary wasting of potassium. Monitoring of hypotension is equally important in the therapeutic management of Gitelman Syndrome.

Bartter syndrome is an autosomal recessive disorder that is characterized by hypokalemia, hypochloremia, metabolic alkalosis, and hyperreninemia with normal blood pressure. There is an excessive loss of sodium, chloride, and potassium in the urine. Bartter syndrome is classified into three main clinical variants :

Numerous underlying mutations have been found to cause the disease, but the following are the main causes leading to salt-losing tubulopathy:

More recently, a disorder has been identified that is associated with mutations in the MAGED 2 gene on the X chromosome, which encodes for the melanoma-associated antigen D2. This protein is required for fetal renal salt reabsorption, amniotic fluid homeostasis, and maintenance of pregnancy. The defective gene is associated with polyhydramnios with prematurity and a severe form of antenatal Bartter syndrome.

Pathophysiology of the Bartter Syndrome

Bartter syndrome is a salt-wasting disease. Due to mutations, the kidneys are unable to reabsorb chloride in the thick ascending loop of Henle or the DCT depending on the mutation. Chloride is transported by passive absorption in the proximal tubule, but in the thick ascending limb and DCT, it is actively transported. As chloride is not being absorbed, it leads to failure of absorption of sodium as well as wastage of sodium and chloride from the body.

The renin-angiotensin-aldosterone system is also activated with volume depletion. Angiotensin II is vasoconstrictive in action, which prevents hypotension by increasing sodium reabsorption. It directly increases proximal renal tubular reabsorption with a counter-regulatory decrease in potassium. High levels of aldosterone also promote potassium and hydrogen ion loss in exchange for sodium. All of these events promote hypokalemia and metabolic alkalosis.

Patients with Bartter syndrome also have hypercalciuria. Calcium ions are reabsorbed through paracellular tight junctions. Dysfunctional thick ascending limb transporters prevent reabsorption of calcium. Hypercalciuria may be one of the reasons for nephrocalcinosis in these patients. Sensorineural deafness is associated with type IV Bartter syndrome, which is due to defects in the barttin subunit of CIC-Ka and CIC-Kb channels. Mutations in only CIC-Kb channels do not lead to sensorineural deafness, as in type III Bartter syndrome.

Etiology of the Bartter Syndrome

Both familial and sporadic forms of Bartter syndrome exist. If inherited, these syndromes are passed on as autosomal recessive disease.

Epidemiology of the Bartter Syndrome

Prognosis of the Bartter Syndrome

Because the disease is inherited as an autosomal recessive disorder, it’s not curable. The disease severity depends on the degree of dysfunction of the receptors. With treatment, patients can live a good life and achieve developmental goals. If the disease is left untreated, mortality and morbidity are possible.

Bartter syndrome is characterized by 5 different subtypes depending on the gene involved and the transporter being affected.

Signs and symptoms of the Bartter Syndrome

Diagnosis of the Bartter Syndrome

Treatment of the Bartter Syndrome

Complications of the Bartter Syndrome