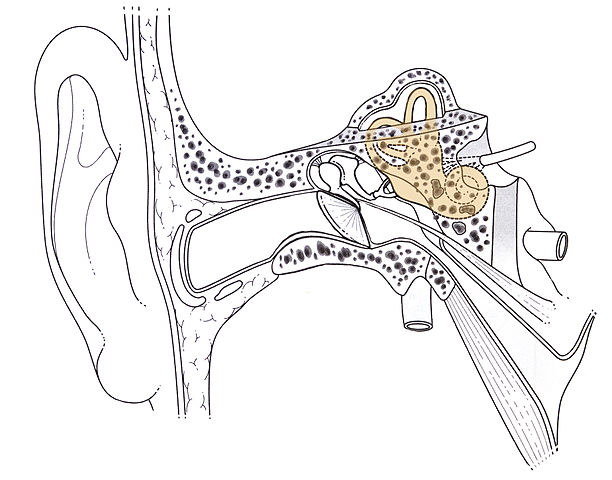 Conductive hearing loss stems from damage to the outer and middle ear, preventing the proper transmission of sound to the inner ear. With sensorineural hearing loss, sound reaches the inner ear but is not fully processed. In some cases, the sound is not processed at all. 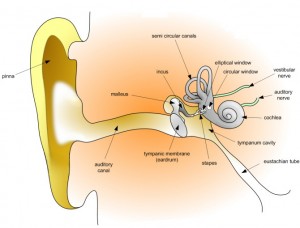 The vibrating tuning fork is placed in the midline of the patient’s head. Healthy individuals hear the bone-conducted sound equally on both sides. In patients with unilateral hearing impairment, two possibilities exist:

Explanation: If sound transmission is impaired, the stimulus that is conducted from the middle of the head through the bone is perceived as louder. Loss of sound through the blocked middle ear is prevented and the impact on the patient’s cochlea is enhanced. Therefore, the sound is perceived as louder in the affected ear. However, if the inner ear is affected, it does not matter how the sound is conducted as hearing ability is impaired. Therefore, the sound can be perceived only in the opposite, healthy ear.

The vibrating tuning fork is placed on the patient’s mastoid bone behind the ear. The patient is asked to say when he or she is no longer able to hear the sound. At that moment, the still-vibrating fork is placed in front of the patient’s ear. Normally, the patient should hear the sound again, as air conduction (AC) is better than bone conduction (BC) and can transmit quieter sounds. This is referred to as a positive Rinne test. If the sound is not heard via AC, the result is a negative Rinne test. Both findings are possible with an impaired ear:

An audiometer produces a very low tone whose intensity is increased until the patient signals that a tone is heard. This hearing threshold is recorded for each tone or frequency. To understand the following section, the reader should be familiar with the physical parameters of hearing (sound pressure level, and frequency).

In many audiograms, the vertical axis is plotted from top to bottom, meaning that the further down on the audiogram, the louder the sound and the worse the sense of hearing. For an individual with normal hearing ability, the lines for AC and BC will mostly be parallel to the horizontal axis and close to the reference level. Hearing loss will manifest on the graph as one of the following types of deviations:

Typically, the curve drops most in the sector of high frequencies because high-pitched tones are more difficult to perceive than low-pitched tones (typical of presbycusis). Curves that deviate from this pattern might indicate a hereditary hearing disorder or Meniere’s disease.

Pathogenesis of the Inner Ear

The ear is complex and its malfunctions and disorders are diverse. This article focuses on the most common diseases that are tested during exams. Pathologies of the ear include hearing impairments and balance disorders.

Tinnitus is not a disease but a symptom. Tinnitus refers to sounds and tones that are perceived by the patient but are not generated by an external source. Such sounds can be constant or transient and unilateral or bilateral. Tinnitus can affect a patient’s quality of life to varying degrees, from hardly noticeable to suicidal thoughts.

Generally, objective tinnitus is rare. Treatment involves removing causative factors, such as the injection of botulinum toxin into the contracting muscles.

The exact pathogenesis of subjective tinnitus has not been identified. The origin might be in the cochlea, auditory nerves, or auditory pathway. What provokes the spontaneous activation of those structures is not totally understood.

The treatment of tinnitus aims to help the patient live with the condition. Aided by the patient, the healthcare professional should determine the likely source of the sound. The healthcare professional should also assure the patient that the tinnitus is not associated with hearing loss or any other disease of the ear. As tinnitus can be associated with psychological problems, psychotherapy should be considered if a patient reports depression or any other psychological problem.

For treatment, ‘covering up’ the tinnitus with an external sound source – a tinnitus masker – can be performed. The frequencies (white noise) produced by the masker are similar to those of the tinnitus. Because the new sounds have an external source, the brain actively suppresses those sounds, and the tinnitus sounds are also suppressed. Everyday methods for managing tinnitus follow the same principle, including sleeping with open windows or applying environmental noise. Silence can be an issue for tinnitus patients because silence increases the perception of the tinnitus.

Vertigo: Malfunctions of the Vestibular System

An often forgotten but very important function of the inner ear is balance. Disturbances of the sense of balance can lead to vertigo. Vertigo describes the sensation of movement of one’s surroundings.

Vertigo is not limited to a feeling of rotation (spinning); other forms include upward-lifting, swaying, rocking, or unsystematic movement. The following section addresses two types of pathological vertigo, which both originate in the inner ear. 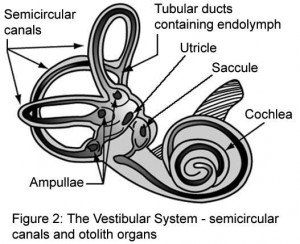 Vestibular neuronitis, or vestibular neuropathy, is usually a unilateral dysfunction of the vestibular system. The condition presents as an acute and severe attack of vertigo. Patients are unable to stand and are nauseous. The assumed cause is viral infection or reactivation which damages the sensory epithelium or the vestibular ganglia. One example of a virus that can remain latent in the vestibular ganglia is the herpes simplex virus. Another possibility is a vascular etiology of the disease. However, the exact mechanism for this is unknown.

The age of onset is 30 to 60 years. Vestibular neuronitis is the third most common peripheral vestibular vertigo after benign paroxysmal positional vertigo and Meniere’s disease.

Symptoms and diagnosis of dysfunction in the vestibular system 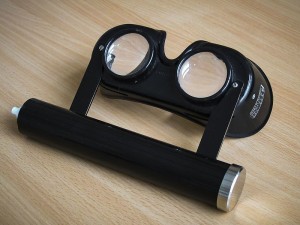 As described above, vestibular neuronitis is a sudden attack of severe vertigo that is associated with extreme nausea and vomiting. The condition often affects previously healthy persons. Patients tend to fall toward the affected side when standing or sitting. The sudden onset is an indicator of viral infection. During examination with Frenzel goggles, a patient experiences strong horizontal rotating nystagmus with fast-phase oscillations toward the healthy ear.

The sense of hearing is not affected, pressure in the ear is normal, and tinnitus is not observed. Only the vestibular organ is affected. The dysfunction can be compensated by the central nervous system so that symptoms often gradually improve after a few days. This can be supported by training the sense of balance.

Treatment first concentrates on alleviating the patient’s condition with sedatives and antiemetics. When compensation starts, ambulation and balance training are important to speed up the compensation process. Patients with good general health can completely compensate for vestibular dysfunction.

Note: Because the disorder is assumed to be a postinfectious autoimmune reaction, the administration of glucocorticoids has been proven to aid the immune system. 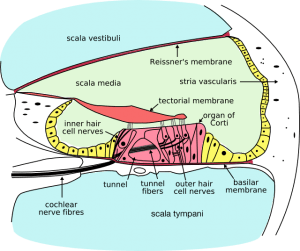 This condition is a peripheral vestibular disorder and is usually unilateral. Patients experience vertigo and nausea for about one minute when changing position (e.g., getting out of bed) or attempting other movements (e.g., tilting the head backward to look up).

This type of vertigo is triggered by inorganic particles (otoliths) that have migrated into the endolymph of one or more of the semicircular canals. Otoliths can be dislodged from the otolithic membrane and migrate through the cupula into the lumen of a semicircular canal. Because of its anatomical position, the posterior semicircular canal is mostly affected.

Otoliths can become dislodged because of trauma (e.g., a strong blow to the head) or spontaneously. The likelihood of otoliths increases around the age of 60 years. Otoliths are sensitive to gravity; thus, they flow downward in the liquid when a person sits up. This causes notable movement within the endolymph, which would normally remain still. The nerve endings in the semicircular canal sense rotating movement, although there is none, leading to the sensation of vertigo.

Patient history is important in the diagnosis of this condition. Typically, a patient has experienced vertigo in situations similar to those described above, and symptoms have abated after one minute. In addition, certain diagnostic maneuvers can be performed.

This test begins with the patient sitting upright. The patient’s head is rotated 45 degrees toward the affected side. Thereafter, a quick change of position follows so that the patient lies on the unaffected side. The patient stays in that position for about 20 seconds, and his or her eyes are observed. Patients with benign paroxysmal positional vertigo will show rotational nystagmus. Occasionally, testing must be interrupted if the patient’s vertigo symptoms become unbearable. After lying on the side, the patient goes back to the upright position and the head returns to the starting position.

In benign paroxysmal positional vertigo, symptoms disappear after a few months. If symptoms persist, possible interventions include the Epley and Semont repositioning maneuvers. The objective of these maneuvers is to reposition otoliths from the semicircular canal back into the utricle. The patient’s head is moved helically so that particles can be removed by the flow from the semicircular canal toward the side that is opposed to the cupula.

The attacks of vertigo stem from a rupture of the Reissner membrane, which separates the endolymph from the perilymph, resulting in a mixture of endolymph and perilymph, with a changed ion concentration.

Women are slightly more affected by Meniere’s disease than men. The peak incidence is between the ages of 40 and 60 years.

Symptoms and diagnosis of Meniere’s disease

Meniere’s disease is characterized by a symptom triad of vertigo, tinnitus, and hearing impairment. Vertigo can last from a few minutes to several hours. Hearing impairment affects mostly low frequencies and can, therefore, be easily differentiated on an audiogram from common hearing loss, which usually manifests in high frequencies.

Initially, the hearing recovers, leading to fluctuating hearing ability. After various seizures, however, permanent hearing loss occurs. The disease can be easily diagnosed based on the symptom triad, nonspecific nystagmus, and an audiogram.

Sedatives may alleviate a patient’s acute complaints. Medication that stimulates blood circulation is supposed to improve reabsorption in the endolymphatic sac. Further, betahistine (H1 receptor agonist) and diuretics may be prescribed. If symptoms persist despite those treatments, surgery can be considered.