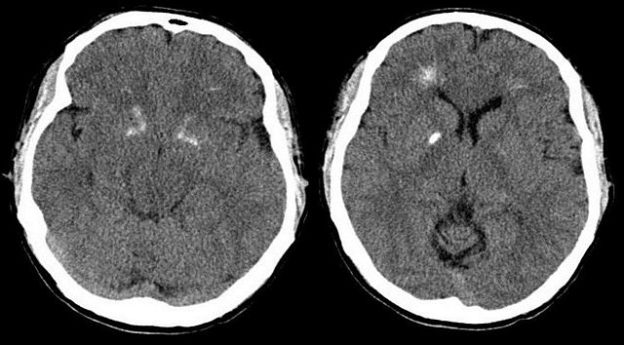 DiGeorge syndrome occurs due to a microdeletion in a segment of chromosome 22.

Other names for this syndrome include the following:

Deletion is heterozygous and involves the long arm (q) of chromosome 22. Up to 50 genes may be affected as a result of this deletion.

Approximately 93% of patients have de novo mutations during early fetal development, while 7% are inherited in an autosomal-dominant pattern from affected parents (see image below). The frequency of DiGeorge syndrome is 1/4,000 to 1/7,000 births. Although the condition is congenital, it can be diagnosed at various ages. 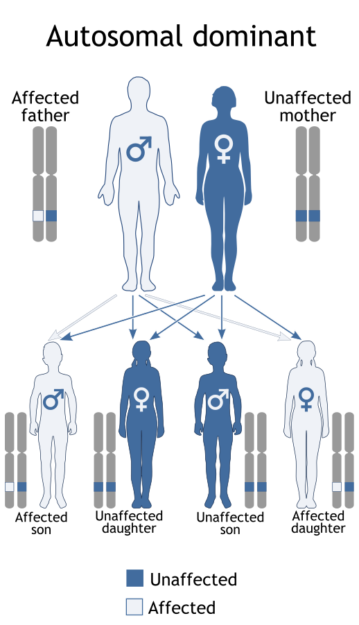 Commonly associated signs and symptoms include the following:

Congenital heart disease is found in approximately 40% of patients. Symptoms include the following:

Features may be subtle. Cognitive disabilities, such as attention deficit hyperactivity disorder (ADHD), occur in 90% of patients. Deficiency of growth hormones can also occur.

Patients with DiGeorge syndrome can be divided into two subtypes based on the degree of thymic hypoplasia and immunologic function.

Complete DiGeorge syndrome is found in only 1% of patients, where the thymus is completely absent, causing severe combined immunodeficiency. Peripheral blood CD3+ T cells make up less than 1%–2% of the circulating lymphocytes. T cells in those patients have abnormal receptors (specifically, a restricted Vbeta TCR repertoire), which have a defective function in vitro, causing extrathymic outgrowth of oligoclonal abnormally T-cells.

This form of the disease is considered fatal, as it causes serious manifestations of recurrent infections, chronic diarrhea, and failure to thrive unless it is diagnosed soon after birth and treated with thymic or bone marrow transplant.

Patients with partial DiGeorge syndrome have a range of normal to immunodeficient T-cell numbers. Infants in this subtype initially have a low number of T cells, with a subsequent slow rising of this level during the first year of life. Although the normal attrition of T-cell numbers in patients with partial DiGeorge syndrome is blunted, a normal number of T cells may be reached by adulthood as a result of a proliferation of existing T cells, rather than recovery of the thymus.

Since those patients still have acceptable numbers of T cells in circulation, they do not usually suffer from severe, life-threatening infections.

Humoral immune deficiencies are commonly associated with this subtype, including an increased risk of IgA deficiency.

Variations in the phenotypes of DiGeorge syndrome make diagnosis difficult. Patients who have one or more deletion signs are likely to have 22q11.2 deletion syndrome, however.

Genetic testing using BACs-on-Beads or fluorescence in situ hybridization is used for prenatal diagnosis. Karyotyping may not detect microdeletions. Array-comparative genomic hybridization is used to detect deletions or duplications through screening the entire genome. The most current diagnostic methods include quantitative polymerase chain reaction and multiplex ligation-dependent probe amplification assay.

Laboratory work-ups include those outlined in the table below:

There is no cure for 22q11.2 deletion syndrome. Management is aimed at treating the associated features of the disease. Treatment revolves around a multidisciplinary approach that aims to improve the function of affected organ systems.

Immune problems due to the absence of thymus need to be identified in the early stages of the disease. Blood transfusions and live attenuated vaccines are used with caution in affected individuals. In rare cases, thymus transplantation is also possible.

Antibiotics are used to treat frequent bacterial infections. Lifelong calcium and vitamin D supplements are required to address hypocalcemia resulting from hypoparathyroidism. The treatment of structural abnormalities, such as surgery for congenital heart abnormalities, is recommended. Early intervention and developmental evaluation are key.

Prognosis varies with the nature and the extent of involvement of organs. Many adults with DiGeorge syndrome lead a long and normal life.