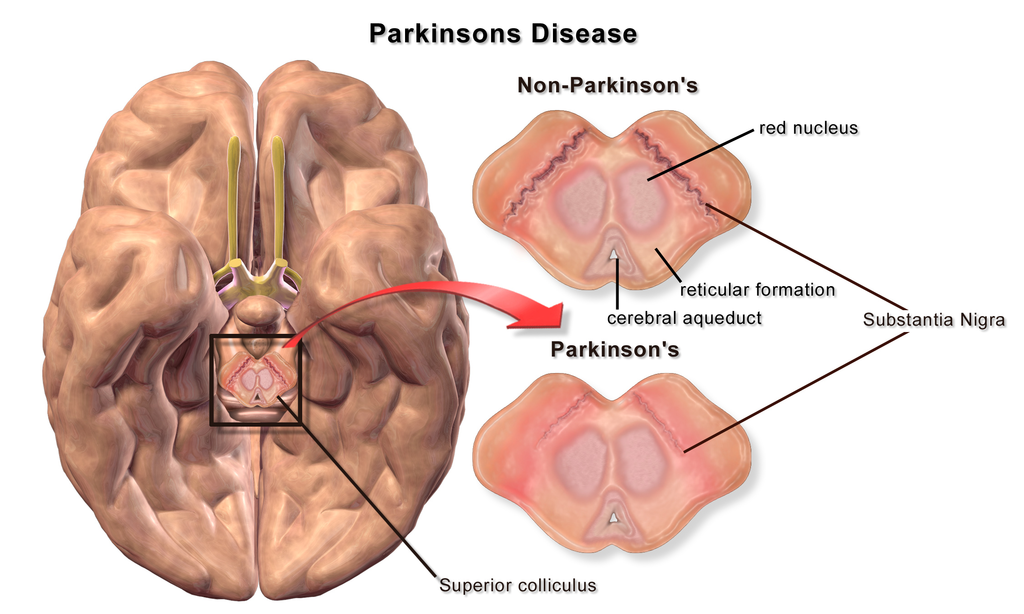 Tremor: At a Glance

This article discusses the following forms of tremor, with the highlighted forms being particularly relevant for exams.

Tremors are defined as involuntary, oscillatory, and rhythmic muscle contractions of a body part at a relatively constant rate. Alternate contractions in agonist and antagonist muscles lead to tremor. The tremor is the most common form of all movement disorders.

Based on its pathophysiology, tremor is classified as an extrapyramidal disease and abnormal movement disorder, typically involving not only the hands but also, for example, the head, trunk,  and voice, either individually or in different combinations.

The most common tremor seen in primary care is an enhanced physiologic tremor, followed by essential tremor and the tremor of Parkinsonism. All tremors present more commonly in old age.

The 2 tremor assessment criteria are:

Classification and characteristics of the 3 most important forms of tremor

Study tip: Read case studies well; the questions in exams on the various forms of tremor are frequently linked to the typical clinical symptoms mentioned in a case study given below.

Physiological tremor is an action tremor and is present in every healthy person when the muscles are activated. Physiological tremor is characterized by a high frequency and a low amplitude of typically 8–13 Hz. This type of tremor occurs in all people, in particular in the presence of stressors, for example, psychomotor agitation stressful situations, during exams, and when it is cold. The enhanced physiological tremor (drug-induced and toxic tremor) occurs as a side effect or sign of withdrawal from certain drugs. 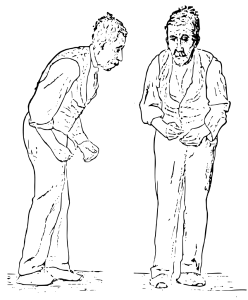 Image: Sir William Richard Gowers, neurologist, researcher and artist, drew this illustration in 1886 as part of his documentation of Parkinson’s Disease. The image appeared in his book, A Manual of Diseases of the Nervous System, still used today by medical professionals as a primary reference for this disease. By: Beao. License: Public domain

Case study: For some time, a 65-year-old man has noticed a progressive slowing of his movements. When walking, his steps have become smaller and he has developed a forward-flexed posture. He has difficulty getting up from deep armchairs and turning over in bed at night. His writing has become smaller. Additionally, the patient presents with a slight resting tremor, which is more pronounced in the right hand than it is in the left. Furthermore, the patient suffers from significant back pain. […] via M. Wehling: Clinical Pharmacology. Thieme Publishers 2011

If a patient, as in this case, presents with resting tremor affecting one side, you have to primarily consider Parkinson’s disease as the cause. To confirm this tentative diagnosis, look for the 2 other cardinal symptoms characteristic of Parkinson’s disease—rigor and hypokinesia. An altered posture and decreased facial expressions usually occur early in Parkinson’s disease and relatives are typically the first to notice these changes. Additional symptoms that may indicate an atypical Parkinson’s disease must be excluded. Parkinson’s tremor may be continuous or intermittent with fluctuating frequency and amplitude and increases with mental stress.

The tremor can become bilateral after several years, but the limbs do not tremble in synchrony.

Treatment of the parkinsonian resting tremor

The treatment of Parkinson’s disease is discussed in this link.

Case study: A 66-year-old woman is a carer for her considerably older husband. For some time she has observed a tremor in her hands. Her father also suffered from this in old age. However, she feels safe when climbing stairs or walking, and does not experience dizziness. The hand tremor occurs especially when she, for example, wants to pour tea into a cup or wants to carry out other focused activities. In emotionally stressful situations, the tremor also enhances.

Essential tremor is the most common form of tremor (5% of the population are affected).

Essential tremor may occur at any age, but most often in early adulthood. However, many patients seek help for it only after old age sets in because of its progressive nature. Men and women are equally affected.

In patients with a positive family history, essential tremor is called familial tremor. The mode of inheritance is mostly autosomal dominant. Unlike resting tremor, essential tremor usually begins symmetrically in both arms and can affect the head and larynx area. Depending on which muscles are affected, this can result in a no-no tremor (shaking of the head) or a yes-yes tremor (nodding of the head). If the vocal cords are affected, patients suffer from shaking or quivering sound to the voice. Tremor involves multiple body parts in majority of cases (~50%), followed by the head in ~30% of cases, voice in ~20%, tongue in ~20%, face/jaw in ~10%, and lower limbs in ~10% of the cases. The tremor improves on consuming alcohol and worsens in times of stress.

Pharmacological treatment includes cardioselective beta-blockers such as propranolol, antiepileptic drugs such as primidone, gabapentin, and topiramate, or botulinum toxin type A. Patients with medication-resistant tremor may benefit from deep brain stimulation of the ventral intermediate thalamic nucleus instead. 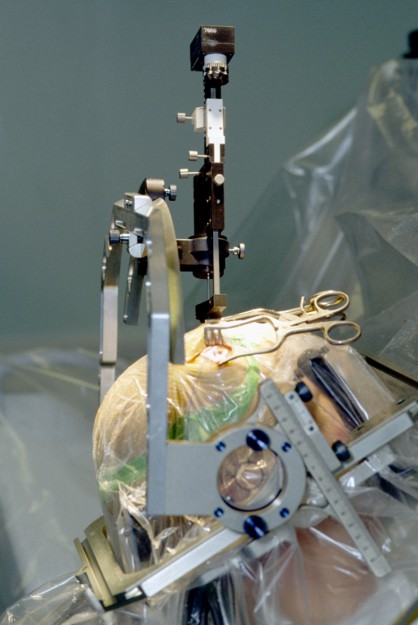 Case study: A 21-year-old previously healthy woman consults her physician. For a few days, she has experienced a slight tremor in her right hand, which increases when she carries out a deliberate target-directed movement. As she does not present with any other symptoms and has a busy professional and personal life, her GP, for the time being, suggests further observation of her symptoms […] via J. Priewe et al.: Das Erste. Springer Publishing 2007.

Intention tremor (also ataxic tremor/cerebellar tremor) is a subtype of action tremor. This tremor is characterized by the trembling of the limbs during a voluntary targeted-directed movement. Intention tremor is caused by lesions in or damage to the cerebellum. Intention tremor does not occur during periods of rest. It affects the trunk and the extremities and can occur either unilaterally or bilaterally.

Intention tremor is symptomatic and a clinical sign of cerebellar disease. Cerebellar lesions will result in a lack of coordination of ongoing movements (ataxia).

Causes of cerebellar tremor may be:

Diagnosis and treatment of intention tremor

Intention tremor has the lowest frequency (2–4 Hz). Pathologic finger-nose test is indicative of an intention tremor. Frequently, difficulty executing fine motor movements can be observed for example if the affected person is asked to grasp an object with both hands. Dysmetria i.e. overshoot on finger-to-nose testing, dyssynergia i.e. abnormal heel-to-shin testing, ataxia, and hypotonia are suggestive of a cerebellar lesion.

Drugs such as topiramate, clonazepam, or propranolol are used to treat intention tremors in off-label use. In the case of unsatisfactory results, a deep brain stimulation of the ventral intermediate thalamic nucleus may be considered.

Dystonic tremor is predominantly a postural and kinetic tremor in muscles affected by dystonia. The frequency of dystonic tremor is 3–7 Hz. Typical examples are the dystonic head tremor, dystonic writing tremor, or dystonic vocal tremor. The exact cause of dystonia is unknown. Some forms of dystonia are genetic, while others are secondary (acquired). It is typically seen in patients younger than 50 years. Its frequency and amplitude are often irregular. 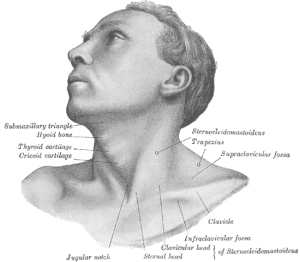 Patients with dystonic head tremor often present with an abnormal head posture (torticollis). Dystonic tremors affecting the hands are frequently confused with resting tremors characteristic of Parkinson’s disease. In many patients with dystonic tremors, gestes antagoniste (sensory trick, i.e. moving an arm to the face or head) leads to a reduction in tremor amplitude (and improvement of the dystonia). Treatment of the tremor is followed by the treatment of dystonia. The most common treatment involves drugs such as botulinum toxin, anticholinergics, and tiapride. In case of resistance to treatment, deep brain stimulation may be considered.

Orthostatic tremor is characterized by a particularly high frequency of 16 Hz, predominantly affecting the legs. Patients complain about a feeling of swaying and a sense of unsteadiness on standing. These symptoms often improve as the patient starts to walk. Patients often describe a typical unsteady feeling in the legs that may even lead to falls.

Note: In patients with orthostatic tremor, the symptoms resolve when the affected person is walking, sitting, or lying down.

Diagnosis is usually obtained based on clinical evaluation combined with surface electromyography (EMG). Confirmation of the diagnosis can be obtained by EMG showing such high-frequency patterns.

For the treatment of orthostatic tremor, drugs like gabapentin or clonazepam are used. In very severe cases, deep brain stimulation of the ventral intermediate thalamic nucleus may be considered.

Clinically, Holmes tremor is defined as a combination of symptomatic rest, action, and postural tremors. Holmes tremor is caused by lesions affecting the brainstem, cerebellum, and thalamus. Brainstem stroke, trauma, vascular malformations, and inflammatory lesions, which are characteristic of multiple sclerosis, are the most common causes for Holmes’ tremor.

Holmes tremor tends to have a slightly lower frequency than Parkinson’s tremor: 3–5 Hz.
The majority of cases of Holmes tremor do not respond to pharmacological treatment. Similar to the treatment of cerebellar tremor, Holmes tremor can also be treated using medications like L-dopa and dopamine agonists, anticholinergics, clonazepam, or clozapine in off-label use. Again, thalamic deep brain stimulation of the ventral intermediate thalamic nucleus may be considered.

Clinical presentation and treatment of the neuropathic tremor

In addition to neuropathic pain, patients suffer from a high-amplitude tremor of a 4–8 Hz frequency.

Treatment of the underlying inflammatory neuropathy usually improves the neuropathic tremor. In addition, medical treatment with propranolol, primidone, or pregabalin may be considered. According to case reports, deep brain stimulation of the ventral intermediate thalamic nucleus can provide remarkable therapeutic benefits.

Psychogenic tremor can present with features like abrupt onset, spontaneous remission, changing tremor characteristics, extinction with distraction, and a history of an associated stressful life event.

Wilson disease, an autosomal recessive disorder, can manifest in young persons with a ‘wing-beating’ tremor.

Overview: Treatment of the Most Common Forms of Tremor

Approach to Diagnosis of Tremor:

The following questions should be asked when evaluating a patient with tremor :