The Different Types of Muscle Tissue and Their Mode of Action 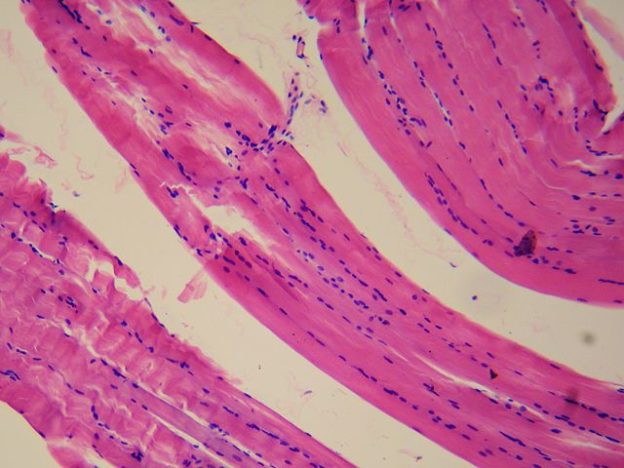 Histologically, the muscles of the body can be differentiated into 3 types:

Table and Images: Partial View of “the musculature of our body can be differentiated into 3 types” by Phil Schatz. License: CC BY 4.0

Smooth musculature is present where a certain tone must be maintained without great energy input because it is innervated by the autonomic nervous system and does not experience fatigue. This type of musculature can be found especially in vessel walls or the intestinal wall, i.e., the gastrointestinal tract and many organs of the urogenital system. Furthermore, the smooth musculature is capable of spontaneous self-contraction.

There are 2 types of smooth muscle tissue:

The visceral smooth muscle (single-unit type) is the more common type and is⁠—just like the heart muscle⁠—autorhythmic. This type of tissue can be found in tubular arrangements that form parts of the walls of small arteries and veins as well as the walls of hollow organs (i.e., stomach, uterus, etc.).

The individual fibers are connected to each other via gap junctions and form a net that enables muscle action potentials to spread. Muscle action potentials are stimulated by a neurotransmitter, a hormone, or an autorhythmic signal of fiber and are transferred to the neighboring fiber. They contract simultaneously as a unit.

In contrast to the single-unit type, the multi-unit type of smooth muscle consists of single fibers, each having its own motor neuron endings and only a few gap junctions between neighboring fibers. This is why ‘only’ one fiber, in the walls of large arteries, airways of the lungs, or inside the muscles of the iris that regulate the pupil diameter, contracts.

Image: ‘Partial view of “Smooth muscle tissue is found around organs in the digestive, respiratory and reproductive tracts and the iris of the eye’ by OpenStax College. License: CC BY 3.0

As the numerous filaments do not have a regular overlapping pattern, smooth muscle fibers do not show any striation, which gives them their ‘smooth appearance’.

Image: ‘The dense bodies and intermediate filaments are networked through the sarcoplasm, which cause the muscle fiber to contract’ by OpenStax College. License: CC BY 3.0

You should remember that smooth muscle:

The muscles of the motor system are striated because most muscles have their origin and insertion at the skeleton. Exceptions include the visceral structures of the head and neck, i.e., the tongue, pharynx, and larynx as well as the upper esophagus, which are not connected to the skeleton but still consist of striated musculature. Skeletal muscles are well supplied with nerves and blood vessels, and generally, each nerve that enters the skeletal muscle tissue is accompanied by 1 artery and 2 veins.

One muscle cell is up to 15 cm in length with a fiber thickness of 10–100 µm. The muscle fiber is the contractile element of the skeletal musculature. They are combined together to form muscle bundles and muscles by an enveloping system of collagen and elastic fibers.

Each muscle fiber consists of hundreds of myofibrils that represent the contractile structure of the skeletal muscle. The mature skeletal muscle fiber is characterized by many nuclei (over 100) below the sarcolemma and striated microfibrils. Each microfibril is surrounded by the sarcoplasmic reticulum. Actin and myosin filaments are interlocked within a microfibril, thereby forming a sarcomere.

Every single cell is completely separated from its neighboring cells and works by itself. 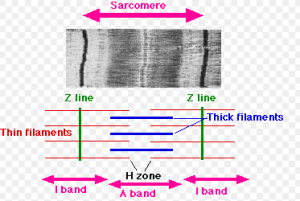 Within the myofibrils, the same bands are located next to each other at approximately the same height, resulting in the typical striation. One sarcomere has a length of approx. 2 μm in its relaxed state and consists of the line sequence Z-I-A-H-M-H-A-I-Z.

The shifting of actin filaments causes muscle contraction. Thereby, one differentiates between 2 types of force development:

In an isometric contraction, the length of the sarcomeres and the width of the cross-striation remain constant. However, force development still takes place as the mobile myosin heads cyclically approach the actin filaments in the same place, repeatedly, and the rotatory motion of the myosin head causes tension, which is emitted outward.

Proprioceptors that provide information about the degree of stretching and tension in a muscle fiber include:

You should remember the following about striated muscles:

The heart muscle is striated but differs greatly from the skeletal muscle because of several special features. The most important difference is that the heart musculature is completely autonomous and independent of nerve impulses because there is no motor endplate. The nerve fibers of the autonomic nervous system, which innervate parts of the heart, are mainly for modulation but are not necessary for the actual function of the heart.

Heart muscle cells are irregularly branched and are approx. 100 µm in length. They are found exclusively in the heart and have the same actin and myosin arrangement as well as the same bands, zones, and Z-bands seen in skeletal muscle fibers.

Intercalated discs (Latin: intercalare = to insert) connect the fibers with each other and emphasize the unique character of heart muscle fibers, which is especially why they differ from skeletal muscles. Microscopically, they are irregular, transversal, thick parts of the sarcolemma that connect the ends of the heart muscle fibers with each other. The discs contain desmosomes that hold the fibers together as well as gap junctions that facilitate muscle action potentials. 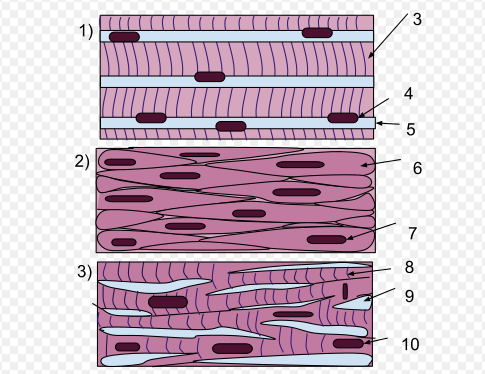 Compared to skeletal muscle tissue, heart muscle tissue contracts approximately 10–15 times longer due to the prolonged influx of calcium into the sarcoplasm. Under normal circumstances, contraction and relaxation take place about 75 times per minute. The contraction occurs due to the stimulation of its own autorhythmic fibers. Due to the continuous rhythmic activity, ATP is produced especially by aerobic cellular respiration in the heart muscle. This continuous rhythmic activity is the main physiological difference between heart and skeletal muscle fibers.

You should remember the following about heart muscle:

Structure of a muscle

Almost every muscle is attached to 2 different bones via its tendons, which are referred to as origin and insertion.

The origin is defined as the bone that does not move or moves less than the other bone. Consequently, the insertion is a bone with more freedom of movement. In the process of a movement, the fixed bone is called the fixed point, toward which the mobile point moves.

The biceps brachii, for instance, has its origin at the bony shoulder girdle and the insertion at a bone of the arm. The proximal attachment site is usually referred to as the origin, the distal one as the insertion site. 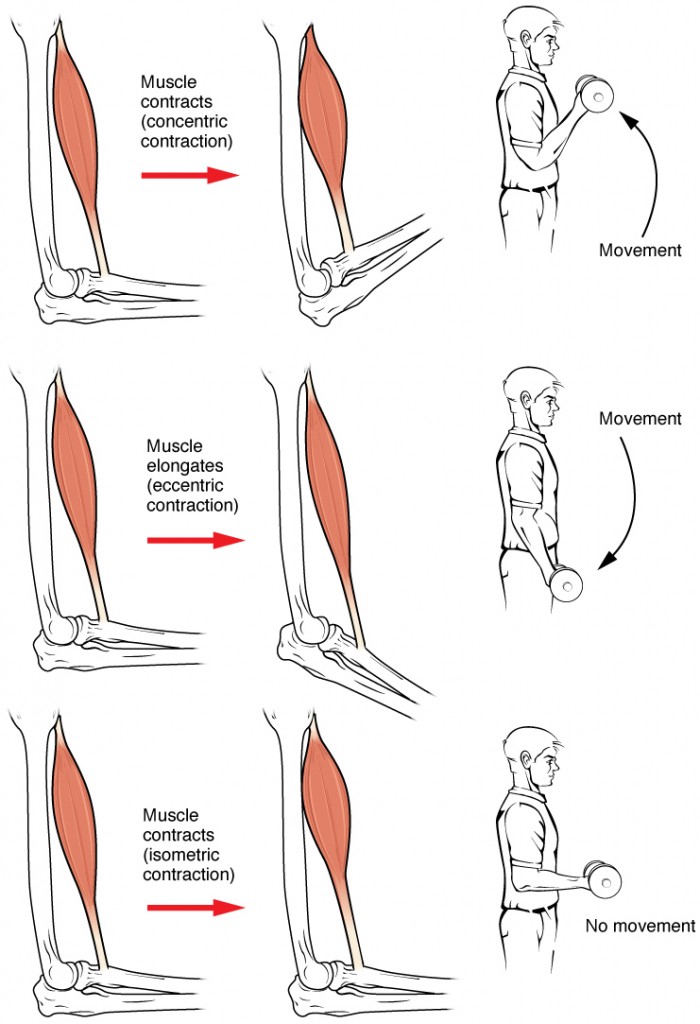 Auxiliary Structures of a Muscle 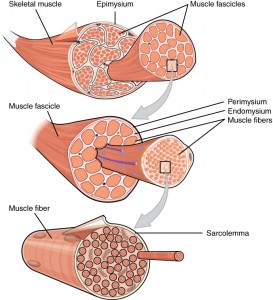 A muscle does not directly merge into the bone but rather via tendons. Tendons are made of firm collagenous connective tissue that can withstand very strong traction to some extent. A gradual transition from muscle to tendon or tendon to muscle prevents a rupture in case of a sudden, strong strain.

Muscle fascia surrounds the muscle. Fasciae are lamellae made of firm connective tissue that surround single muscles or muscle groups. There are

Single fasciae serve as the shaping and location of a muscle as well as a guiding wrap in which the fibers are tightly packaged.

Groups of fasciae, on the other hand, surround muscles with the same function and separate (as intermuscular septa) antagonistic muscle groups. They also form individual compartments together with the superficial fascia.

The superficial fascia covers all muscles of the trunk and the extremities and separates the subcutis from the musculature.

Synovial sheaths are connective tissue-like guiding tubes of long tendons of the extremities that surround the tendon where it rests on bones and pressure is exerted. They consist of the fibrous layer on the outside, which keeps the tendon in its place, as well as the synovial layer, which facilitates the gliding of the tendon inside the tube of connective tissue. Synovial sheaths are particularly important for reducing friction. They are found in the long tendons in the hand and foot, for instance.

Bursa sacs are spaces in the connective tissue that contain synovia, just like joints. They are also part of the auxiliary structures. A bursa sac is formed between bones and the underside of a muscle if a muscle moves around a protruding bone. It distributes pressure and facilitates the reciprocal shifting of the structures.

The sesamoid bone is also a special auxiliary structure. It starts off as a cartilaginous deposit in the tendon, which ossifies later on. By raising the insertion angle, the sesamoid can also act as a supporting structure (bone protrusion). It balances out high tension where synovial sheaths alone are insufficient. The patella is the largest sesamoid in the human body.

Aside from muscle stiffness, the pulled muscle is a very common and typical sports injury that can occur in every muscle group.

A pulled muscle occurs if a muscle ruptures due to a strong impact, accompanied by bleeding and severe pain. Depending on the severity of the injury, restricted mobility could occur. Pulled muscles belong among closed muscle injuries since only the muscle is affected and no external signs are visible. Principally, it is not an actual injury of the muscle but a hardening of the muscle since it is the muscle tonus that is impaired.

In contact sports, the quadriceps femoris on the front side of the leg (extensor of the leg) is often at risk. Basketball players, on the other hand, rather have difficulties with the upper arm or shoulder muscles.

Risk factors for a pulled muscle:

This injury is treated with the help of RICE therapy.

C – Compression with a bandage

E – Elevation of the affected extremity

The duration of the recovery process of a pulled muscle can vary. Pain often subsides after a few days, but the entire healing process usually lasts for up to 3 weeks. The sooner a pulled muscle is diagnosed and treated, the faster the individual will be free of pain and symptoms.

New smooth muscle cells can originate from a number of sources in different organs.