The Most Important Diseases of All 12 Cranial Nerves

Facial nerve palsy is paresis of the muscles supplied by the facial nerve (VII) on 1 side of the face due to a lesion of the facial nerve. The paresis generally only occurs on 1 side, but it may also occur on both sides. Usually, it is temporary. Initially, the patient suffers from non-specific dragging pain in the region of the ear before the paresis develops over several hours or days.

This occurs in 10–35 cases/100,000 inhabitants. During pregnancy, the prevalence increases 3 times, especially in the 1st trimester. This condition has a universal distribution and has no predilection for ethnicity or age. 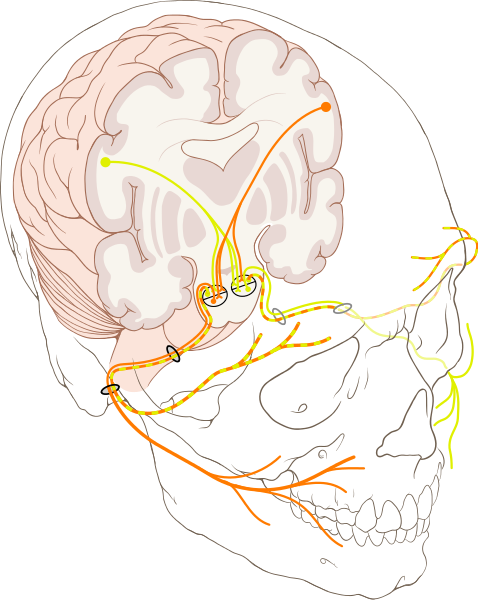 Depending on the location of the lesion, one distinguishes between central and peripheral facial nerve palsy.

In both, rehabilitation must be started as soon as possible to avoid complications.

Idiopathic facial nerve palsy (Bell’s palsy) is the most frequent peripheral cranial nerve lesion, and it is accompanied by a single-sided and acute occurrence of peripheral facial nerve palsy. This disease can occur at any age, often between the ages of 10–20 and 30–40 years. Women seem to be affected more frequently than men.

Bell’s palsy heals in approx. 70% of cases without any consequences, but persistent defects after re-innervation may remain.

As a consequence of 1-sided peripheral facial palsy, the following actions are no longer possible:

These symptoms also suggest the failure of the nerve, and weakness or complete paresis of the mimic muscles may result. Symptoms include:

Disorders of lacrimation, headache, gustatory disturbances in the anterior 3rd of the tongue, ear pain, and increased hearing sensation are other accompanying symptoms.

Causes of Bell’s palsy are:

Central facial palsy is due to a lesion of the 1st motor neuron in the region of the brain or its descending projections to the spinal cord.

In contrast to peripheral facial palsy, a patient with central facial palsy can frown and close his eyelid since the peripheral nuclear areas (facial nucleus) lead to the fibers of the facial nerve and are interconnected to finally reach the forehead and the eye, which also receive fibers from the other side.

The musculature is no longer mobile – especially in the area of the mouth – and it is flaccid, as with peripheral facial palsy. Also, the labial angle droops are immobile and are partially open on the affected side. 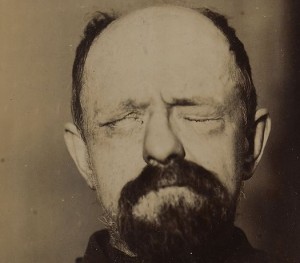 Trigeminal neuralgia occurs in the innervation area of the trigeminal nerve in the form of a severe, acute, and recurrent attack-like facial pain that is generally single-sided. Three forms are distinguished:

Previously called tic douloureux. The principal cause of this pain is the compression or mechanical irritation of the trigeminal nerve by blood vessel loops at the point where it exits the brainstem. The average age of onset is between 50–79 years.

This form of trigeminal neuralgia accompanies demyelination diseases such as multiple sclerosis, which occurs as a consequence of either tumors or Costen’s syndrome (e.g., a facial pain which originates from the facial muscles due to malfunction of the mandibular joint). Inflammatory processes and, in rare cases, medical interventions can result in trigeminal neuralgia.

Symptomatic trigeminal neuralgia may be accompanied by hypoesthesia, i.e. reduced sensitivity towards tactile stimuli, in the form of numbness or tingling, in the region of the 1st trigeminal branch. Furthermore, the corneal reflex is weakened.

Patients with symptomatic trigeminal neuralgia are, on average, younger than patients with the classical form of the disease (tic doulourex). Double-sided facial pain often also occurs in such patients. The goal of therapy is to treat the underlying cause.

The patients try to avoid the trigger by reducing their mimic movement, not speaking, and not eating. Often, only fluid foods are taken in with a straw. In the cold seasons, most patients protect themselves from the cold and the wind with a scarf. 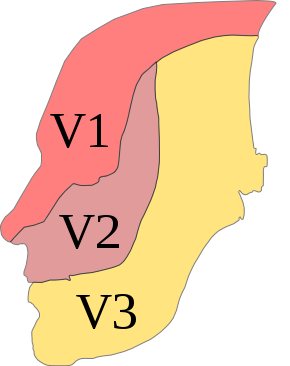 The oculomotor nerve (the eye movement nerve) innervates several eye muscles and – along with the trochlear nerve (IV) and the abducens nerve (VI) – is responsible for the movement of the eyeball.

Lesions of this nerve can result in various types of paresis: complete (inner and outer) oculomotor nerve palsy.

Complete loss of the function of the nerve leads to the following clinical picture:

Causes of oculomotor nerve palsy are:

Ophthalmoplegia interna involves completely unresponsive pupils accompanied by the free movement of the eyeball; the pupil does not react to either direct or indirect light nor convergence. As a result, the patient does not have a clear vision in the affected eye when looking at close objects. There is also paresis of accommodation.

In cases of ophthalmoplegia externa, however, the motility of the eyeball is impaired, yet autonomous innervation of the pupil and the ciliary muscle is intact. If pupil function has been preserved, complete paresis of all the muscles innervated by the oculomotor nerve is quite rare.

Another disease or deficit of the oculomotor nerve would be pupils of unequal width, which is referred to as anisocoria. Anisocoria is present in Claude-Bernard- Horner syndrome, which is characterized by constriction of the pupil (miosis), a drooping eyelid (ptosis), anhidrosis (decreased sweating), and posterior displacement of the eyeball (enophthalmos).

Anisocoria can also occur alongside intracranial pressure involving compression of the oculomotor nerve.

Trochlear nerve palsy is characterized by isolated paresis of the superior oblique muscle. The function of this muscle is to depress the eyeball. In cases of paresis, the symptom increases during adduction and is virtually absent during abduction, i.e. the eye of the patient faces towards the nose and upwards, and the patient experiences double vision (diplopia), just as in cases of oculomotor nerve palsy.

Causes of trochlear nerve palsy are tumor, demyelination, meningitis, and other. 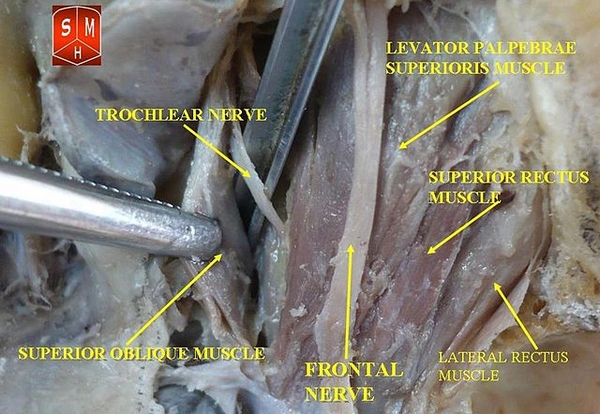 A distinction is made between double and single-sided trochlear nerve palsy.

In cases of double-sided trochlear nerve palsy, the Bielschowsky phenomenon is often positive on both sides. In this case, the diseased eye stands higher, is rotated outwards to the temple, and has a squint deviation to the nose, which creates oblique double vision. To compensate, the patient tries to rotate and lower the chin and to tilt the head to the healthy side.

Compensatory head-turning and tilting are usually not present, in contrast to 1-sided trochlear nerve palsy.

One-sided trochlear nerve palsy is accompanied by a compensatory head posture with turning and tilting towards the healthy shoulder and lowering of the chin. The affected eye is in an abduction position and is rotated outwards. An annoying pathological rolling image is avoided since the slackened internal rotator is not utilized this way.

The abducens nerve palsy is characterized by an isolated paresis of the rectus lateralis muscle (an externally turning muscle), which often occurs without identifiable intracranial lesions. In a high percentage of cases, the cause of these palsies remains idiopathic. However, trauma, a diabetic metabolic state, and increased intracranial pressure due to tumor or meningitis are some causes of abducens nerve palsy. 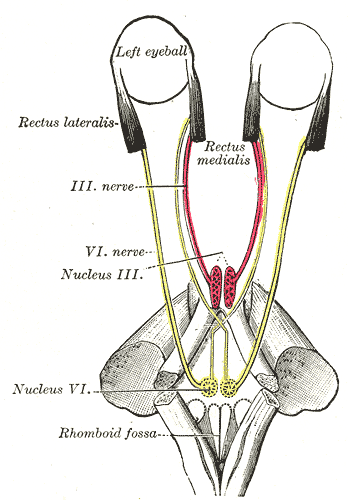 In cases of abducens nerve palsy, convergent paralytic strabismus occurs even in the primary position, i.e. the affected eye deviates towards the inside and the paralyzed eye is impaired or inhibited if it tries to turn to look to the side or to look up.

Furthermore, a slight adduction position can occur when looking up or down. Undisturbed binocular movement is, however, observed when looking to the healthy side.

Horizontally parallel double images (i.e. double vision) are usually perceived even in the primary position. The deviation of the images of objects on the retina increases on the paralyzed side, but when the affected eye is covered, the image corresponding to the respective side disappears.

However, the annoying phenomenon of double vision causes a compensatory head posture, which leads to the head being turned towards the side of the paralyzed muscle – a position that does not require the rectus lateralis muscle.

Lesions of the visual pathway

Each optic tract consists of ‘2 half, former’ optical nerves. They conduct the lateral part of the visual information coming from the same side and also the medial sensations of the opposite side.

The following deficits in the visual field can occur as a result of nerve lesions:

Further lesions can arise in the realm of visual radiation, and such lesions have diverse consequences since visual radiation spreads a fan-like manner. Tumors and strokes are the most frequent triggers for this visual disorder.

Deficits in the visual field can be observed in the following form: 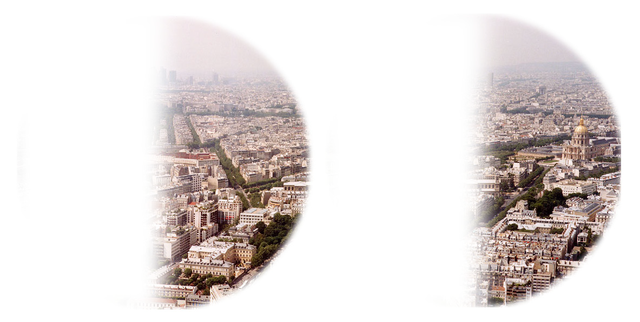 Quadrantanopsia occurs whenever there is only partial damage to the visual radiation such that a quadrant of the visual field is missing rather than an entire half.

This term refers to a complete loss of vision without apparent lesions in the eye; it can occur in 1 or 2 eyes. Amaurosis can be congenital (Leber’s congenital amaurosis) or secondary. What this means for the optic nerve is that injury is commonly secondary to compression of the nerve by tumor (commonly from the pituitary), trauma, or ischemic events.