Diabetes Therapy: How to Achieve Normoglycemia

Patients with diabetes mellitus need to be comprehensively examined and instructed by their physicians. Only when the extent of the disease has been established can late complications be avoided, which, as a rule, lead to mortality in diabetes mellitus. The treatment of diabetes requires good compliance for a successful outcome. 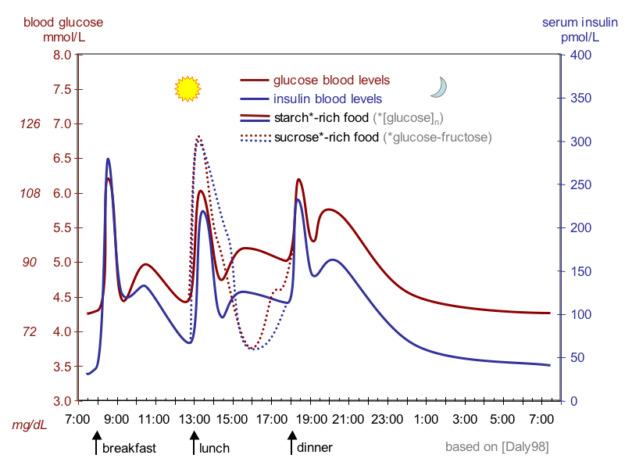 Image: ‘Idealized curves of human blood glucose and insulin concentrations during the course of a day containing three meals; in addition, effect of sugar-rich meal is highlighted.’ By Jakob Suckale, Michele Solimena. License: CC BY 3.0

As little or no insulin is produced by patients in diabetes mellitus type 1, the body should be supplied with exogenous insulin. Although a healthy diet and exercise can make a small contribution, the injection of insulin cannot be avoided.

In the case of insulin therapy, the need for insulin depends on the patient’s daily activities as food, disease, and exercise affect insulin levels and must be considered in the dosage so that hypoglycemia or hyperglycemia does not result. Patients must be well-informed before they embark on subcutaneous insulin self-administration using an insulin pen. The greatest danger in insulin therapy is hypoglycemia. Insulin edema may also occur. Patients rarely produce allergies or antibodies to insulin.

The insulin type used depends on the patient. As a rule, intensified insulin therapy is provided for patients with type 1 diabetes. In this case, regular as well as long-acting insulin is injected in order to imitate the natural insulin level. Long-acting insulin constitutes 40–50% of the total daily requirement and ensures a constantly low insulin level during the day and at night. A corresponding injection in the evening is usually sufficient. In rare cases, morning and evening injections are provided.

However, the regular insulin form, which accounts for the remaining 50–60% of the total daily requirement, is administered before meals, in order to cover the corresponding insulin requirement. The bolus of regular insulin is previously determined by blood sugar levels, and it is based on the carbohydrate content of the meal and corresponding activities. So, patients can individually adjust their insulin injections in accordance with their daily routines. However, such therapy requires extensive training because patients need to often measure blood glucose levels and obligatorily inject insulin. Therefore, intensified insulin therapy is suitable only for mentally fit type 1 diabetic patients.

As elderly patients often have a regular daily routine, and they find it difficult to handle an insulin pen, conventional insulin therapy is advisable for them. Only in the morning and evening times, combination insulin must be injected before meals: in the morning, two-thirds of the total daily requirement is injected and in the evening, the remaining one-third is administered. The evening injection can also be replaced by long-acting insulin when the fasting blood glucose level is too high. In conventional insulin therapy, insulin injections should always occur at the same time in order to avoid hypoglycemia.

Another alternative is the insulin pump therapy, which allows a more individual daily routine and better blood glucose control than intensified insulin therapy. The insulin pump is mounted directly on the body and continuously injects regular insulin via the catheter under the skin (continuous subcutaneous insulin infusion = CSII). Before meals, an administration of an extra bolus injection is provided on demand. The bolus can be adapted to the carbohydrate content of the diet. The insulin pump must be worn all day long. However, it is possible to take off the pump temporarily, but not for more than 1–2 hours.

Insulin pump therapy is especially suitable for patients with an irregular daily regime or for those who suffer from the dawn phenomenon. In the latter case, patients may suffer from hypoglycemia which often occurs in the morning. This can be remedied by pumping programming as it may increase an insulin injection level during sleep. A disadvantage of the insulin pump is that the catheter may slip out of the subcutaneous fatty tissue, which leads to a rapid increase in blood sugar. Therefore, insulin pump therapy is only suitable for experienced type 1 diabetic patients.

Type 1 diabetic patients may not influence insulin production via dieting, but they can control blood sugar levels. Patients should be fully informed about healthy eating, as they must consider food intake in relation to insulin dosage. It should be noted that physical activity lowers the blood sugar level and must be considered in insulin dosage.

With regular insulin, there should be 6 meals, divided into 3 main courses and 3 snacks. However, when the patient is treated with insulin analogs, 3 meals a day are sufficient. This norm prevents excessive blood sugar fluctuations, and the blood glucose level remains relatively constant.

As type 2 diabetic patients suffer from a relative insulin deficiency, the primary therapeutic goal is to stimulate the production of insulin by dieting and exercise in order to stabilize metabolism. Forty to fifty percent of type 2 diabetic patients also become obese and may reduce their diabetes risk by maintaining a BMI of 19–25 kg/m2. Nevertheless, it may be necessary to prescribe oral antidiabetic drugs in the treatment process. If drug therapy is unsuccessful, type 2 diabetic patients should be prescribed insulin. However, this is the last solution for this type of diabetes.

An appropriate diet in diabetes is more important in type 2 diabetes than in type 1 because normoglycemia must be achieved. To achieve this, the following basic rules of a healthy diet must be considered by every patient:

Physical activity per the American Diabetes Association Recommendations in 2016

Oral antidiabetic drugs may be prescribed if dietary therapy and plenty of exercise are not sufficient to reduce blood sugar levels and stimulate the production of insulin. Currently, there are 7 substance groups as follows:

Frequently, oral drug therapy is combined with insulin for type 2 diabetic patients. Oral combination therapy with biguanides (metformin) and sulfonylureas is the best method. Here, a single injection of insulin a day is sufficient. Either combination insulin in the morning or long-term insulin in the evening may be injected. 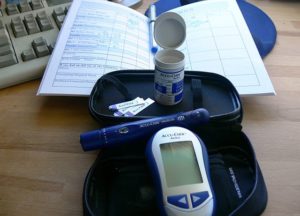 Image: “A kit used by a woman with gestational diabetes” by Jessica Merz. License: CC BY 2.0

Women who develop diabetes during pregnancy should first attempt to decrease their blood sugar levels via appropriate dieting, physical exercise, and weight control. Oral antidiabetic drugs are contraindicated during gestation. Insulin therapy is the last option if other alternatives are ineffective.