Diabetes insipidus (DI) is an uncommon medical condition caused by the decreased secretion or action of antidiuretic hormone (ADH), a.k.a. vasopressin. This condition is characterized by polyuria (urinary output of more than 3 L per day) and hypo-osmolar urine (the urinary osmolality < 300 mOsm/kg).

There are two forms of diabetes insipidus: central DI and nephrogenic DI.

In the central form of the disease, there is a decreased secretion of antidiuretic hormone (ADH). On the other hand, nephrogenic DI is characterized by the inability of the kidneys to concentrate urine despite the availability of ADH. This is known as ADH resistance.

Anatomy of the Pituitary Gland

The neurohypophysis is controlled by the nervous system and only produces two hormones: vasopressin and oxytocin. Antidiuretic hormone (ADH), also known as vasopressin, regulates body water levels and blood pressure. Oxytocin, on the other hand, plays an important role in parturition and breastfeeding.

ADH is synthesized in the suprachiasmatic nuclei of the hypothalamus and is ultimately transported to the posterior part of the pituitary via the stalk of the pituitary. ADH release normally occurs following stimulation of osmoreceptors, usually due to increased plasma osmolality.

ADH acts on V2 receptors at the distal kidney tubule and the collecting duct by causing insertion of aquaporin channels, which increases the collecting ducts’ permeability to water. This, in turn, causes reabsorption of water to occur, as water enters the hypertonic interstitium of the renal pyramids, thus concentrating the urine. 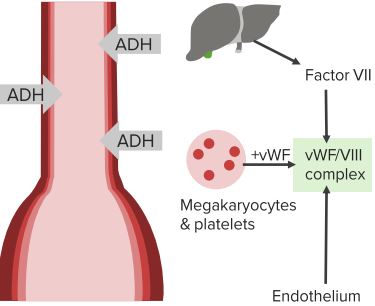 In the absence of ADH, the urine is hypotonic to plasma (dilute urine), urine volume is increased, and there is net water loss leading to the increased osmolality of body fluids.

At supra-physiologic levels, ADH acts on V1 receptors to cause vasoconstriction, hence the term vasopressin.

Epidemiology and Etiology of Diabetes Insipidus

Diabetes insipidus is uncommon in the United States and has a prevalence of 3 cases per 100,000 individuals. Additionally, DI is neither gender-related nor linked to a certain race or ethnic group. DI is often an acquired disorder but 1-2% of the cases are believed to be hereditary.

Central DI and nephrogenic DI have different etiologies and are discussed separately. 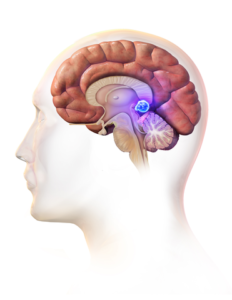 An antidiuretic hormone is produced by the hypothalamus and secreted by the posterior pituitary gland (neurohypophysis). Therefore, central DI is often related to a pituitary defect that leads to a decrease in ADH secretion.

Brain and pituitary tumors, cranial surgery and с шкнhead trauma are the three most common causes of central diabetes insipidus. The etiology of one-third of the cases is attributed to an unknown cause.

It is important to note that the term “idiopathic central DI” is not accurate. Advanced high-resolution MRI has pointed out the majority of these cases to an abnormality in the hypothalamus. Additionally, a larger number of the patients previously diagnosed with idiopathic central DI have been found to have antibodies against ADH-secreting cells, thus emphasizing the role of autoimmunity.

Finally, severe head trauma, especially if accompanied by subarachnoid hemorrhage, has been associated with an increased risk of central DI which could become chronic.

The most common cause of central diabetes insipidus is idiopathic CDI (autoimmune antibody-mediated destruction of the vasopressin secreting hypothalamic cells).

Central DI after trauma or neurosurgery to or around the region of the pituitary and hypothalamus is also common. This lesion may exhibit one of the following 3 patterns: transient, permanent, triphasic, with the latter being observed more often clinically.

Other important causes of central diabetes insipidus include:

Hereditary causes: diabetes insipidus may rarely be inherited via inheritance patterns such as both autosomal dominant and recessive, resulting in defects in the ADH gene. This leads to the problem in the synthesis of ADH. An example of an inherited syndrome that results in an ADH dysregulation, among other things, is the Wolfram syndrome. Wolfram syndrome is a rare autosomal recessive disorder where the patient presents with Diabetes Insipidus, Diabetes Mellitus, Optic Atrophy and Deafness (DIDMOAD).

Infiltration, as in histiocytosis or sarcoidosis, may also result in central diabetes insipidus.

Nephrogenic DI is commonly encountered in patients with lithium toxicity, hypokalemia, and hypercalcemia, though patients with chronic kidney disease could also develop DI. Lithium causes dysfunction of the collecting duct in the kidneys and this manifests as an inability to concentrate the urine. Sickle cell disease and amyloidosis are also linked to nephrogenic DI.

Other medications linked to nephrogenic DI include amphotericin B, ofloxacin, and orlistat. Pregnancy may also transiently cause gestational diabetes insipidus, which usually resolves after delivery.

Hereditary forms of DI are rare and account for approximately 10% of central DI cases and 1% of nephrogenic DI. Mutations in the arginine-vasopressin NP2 gene (AVP-NP2) on chromosome 20p13 are associated with a mutated and toxic form of ADH that eventually leads to the destruction of ADH secreting cells and ADH deficiency. AVP-receptor-2-gene mutations on chromosome Xq28 result in nephrogenic DI due to ADH resistance.

Water balance regulation is dependent on three main factors: thirst, ADH, and kidneys. A failure in any of these three factors would eventually result in DI.

Physiologically, ADH increases the water reabsorption in the collecting ducts of the nephrons and regulates the water content of the body. In dehydration, the secretion of ADH increases to reabsorb more free water. In the absence of ADH (central DI), and when the kidneys are resistant to ADH (nephrogenic DI), the water cannot be reabsorbed. Instead, it is increasingly excreted by the kidneys, which produce a high volume of diluted urine.

The central DI could also be related to:

In nephrogenic DI, the kidneys lose the ability to concentrate the urine due to ADH resistance.

Patients with DI present with polyuria, polydipsia, and nocturia. Nocturia, increased urination at night time, is an important manifestation of true DI, in contrast to psychogenic DI. Urinary output is more than 3 L per day and may reach up to 20 L per day.

It is important to inquire about surgical and trauma history to exclude possible neurosurgery-related central DI or post-traumatic brain injury DI.

Infants with hereditary DI present with crying, polyuria, and hyperthermia due to dehydration. At later stages, these infants show growth retardation and weight loss. If the patient’s etiology has also affected the anterior pituitary, other hormonal deficiencies can also be evident.

A physical examination is not very helpful in these patients unless there is limited access to free water and then dehydration will be appreciated. An enlarged urinary bladder can be identified in patients with DI.

Symptoms of hypernatremia can also be present: lethargy, thirst, weakness, irritability, confusion, convulsions, and even coma.

Progression and Complications of Diabetes Insipidus

Though rare, there is a probability of DI-related death. The reason for the fatal end is the associated dehydration, the increase in the serum sodium concentration and cardiovascular collapse.

Due to excess water loss, severe dehydration may occur in some of the cases. The dehydration will manifest with confusion and irritability, dizziness, headache, and mouth dryness.

Due to the usual diabetes insipidus treatment, such as desmopressin and other therapy, fluid accumulation may occur. It could lead to hyponatremia (with symptoms like headache, vomiting, seizures). This is prevented by means of monitoring the sodium levels after starting therapy with desmopressin.

If the thirst is not adequately sated or there is no access to water, this leads to the development of hypernatremia and all its associated clinical manifestations.

The first and most important step in the diagnostic workup of a patient suspected to have DI is confirming a urinary output volume of more than 3 L per day. A 24-hour urine collection is indicated. A urine ou