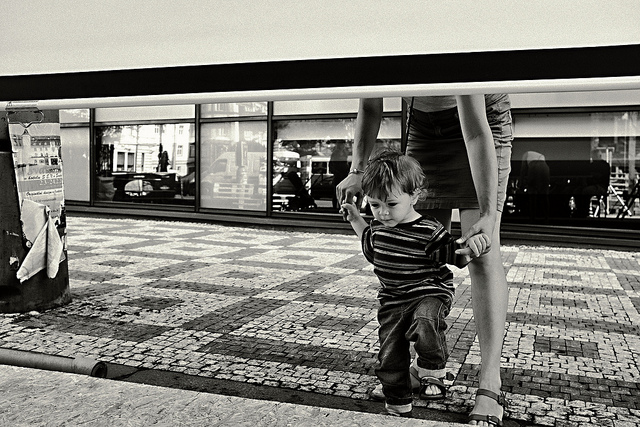 Image: “children’s view of the world” by Petr Dosek. License: CC BY 2.0

Development: Changes in the organism. Ontogenesis describes the development of an individual from a germ to a fully grown human being. Phylogenesis refers to the evolution of an entire group, such as a species.

Socialization: Our socialization develops and changes permanently under the influence of social experiences. Learning processes, norms, moral concepts of a particular culture – they all leave a lasting imprint on us and make us grow into a mature personality that is capable of social interaction.

Maturation and learning: The developmental process is influenced by genetic, social and mental factors. The genetic factors are responsible for the process of maturation. Some processes of maturation occur spontaneously, on one hand, or in the context of learning processes, on the other.

Learning = Stimulation from the environment and training

Maturing and learning: When behavioral changes occur across different cultures at a certain moment in the lifespan, this is called maturation. Learned behavior is more variable with respect to the point in time and requirements. Deprivation experiments also show that newborns undergo certain behavioral changes even without specific environmental stimuli.

Critical/sensitive period: In these maturation stages, the organism is especially sensitive for learning certain ways of behavior. If stimuli that are essential for this behavior do not occur in this time frame, the learning process is only partly possible and usually very difficult (for example, language acquisition, the formation of emotional relationships).

Pregnancy can be divided into three stages.

The following chart gives you an overview about the cornerstones of prenatal developmental steps:

The key difference between maturation and learning is that learning occurs through experience, knowledge, and practice while maturation comes from within an individual as he/she grows and develops.

‘Practice makes perfect’ is a well-known phrase; however, it does not apply to motor development! The process of motor maturation follows its own internal rules. Exercise can only help to achieve safety and agility. Two trends can be distinguished in motor development:

Stranger anxiety begins at about 8 months old and is attributed to the child’s developing ability to distinguish between familiar and unfamiliar persons. The child’s inner question is: “Who is trustworthy and ensures my mental and physical well-being?” Stranger anxiety decreases continually from the third year of life.

Between 6 and 9 months of age, the child dares to go on first “discovery tours.” Separation anxiety can be considered as a limit to this instinct. Between 2–3 years of age, separation anxiety peaks, continually decreasing afterward.

Conscious urination and defecation begin at the age of 2 years with the help of parents and instructive assistance.

The process of bonding develops and is aided by a lot of body contact, breastfeeding, and permanence of persons. Ainsworth designed the Strange Situation Procedure and observed 3 fundamental attachment styles.

The Swiss developmental psychologist Jean Piaget paved the way for most of what is known today about the development of cognition, thinking, imagination and problem-solving. Piaget was of the opinion that especially active interaction is important for the child’s development. In his theory, children act in accordance with organic schemata of knowledge and behavior. However, the constant new input from the environment requires adaption. Two processes of adaption can be classified:

These two mechanisms are supposed to maintain balance (equilibration).

Overview of the stages of cognitive development by Piaget

Language is absolutely necessary to achieve social cognition.
Ego consciousness, for example, is expressed verbally at the end of the 2nd year of life in the “defiant phase”: “Me! I want!” This phase is an important step in developing the ability to understand other perspectives and develop empathy.

Moral: Value and belief systems that we use to decide about right and wrong behavior. The American psychologist Lawrence Kohlberg created a stage model about moral development, with each stage subdivided into two substages. It represents an extension of Piaget’s model of cognitive development.

Educational Styles: The Cycle of Parents and Children

Education is always a reciprocal (bilateral) process. This means that parents, as well as the child, are always involved. 4 fundamental educational styles can be distinguished:

Note: The authoritative educational style seems to be the most appropriate one for the child’s development.

Social determinants like changes in family structures (single parenting, patchwork families, etc.) and the media, significantly influence the child’s development and socialization. Children often do not accept their parents as models anymore and rather choose characters from movies and TV. Beside psychological impacts, “babysitter TV” is a cause of physical inactivity and secondary diseases.

Sigmund Freud’s approach assumes that experiences are formed from one’s personality. He especially emphasized the importance of early childhood psychosexual development. Every human experiment in the different stages, thereby forming his character by satisfying certain drives. If this satisfaction of drives cannot be achieved, conflicts emerge and thereby a fixation on this stage occurs.
Critique: Freud’s theory lacks any empirical base; neither is the theory falsifiable.

The stage model by Erikson builds on Freud’s theory in large. However, it rates the human development as a life-long process. Erikson classified 8 stages in this process.

Development in Early and Middle Adulthood

Young adults often have to orient themselves in different roles simultaneously: partnership, family and job. Role conflicts bring along psychosocial stress. Two established models are the job demands-resources model and the gratification model.

Women have to battle the climacteric stage between the 40th and 50th year of age before the menopause begins. Main complaints are hot flashes, vertigo, sweating attacks, weight gain, and tiredness.

In contrast to that, men are more often affected by the midlife crisis than women: Life is interpreted as a chain of disappointments and wrong decisions, and common consequences are divorces and adulteries. Suicide threats should be taken very seriously. Life crises like divorce, the partner’s death or job loss are common reasons for suicidal thoughts.

There are two controversial theories with respect to psychosocial development in old age:

Social isolation and loss of the partner increasingly characterize the social situation of old people, decrease of participation due to disability and uprooting due to referral to retirement homes. Because of constant cuts of pensions, high costs for medical treatments and devices, many people also suffer from pauperism in old age.