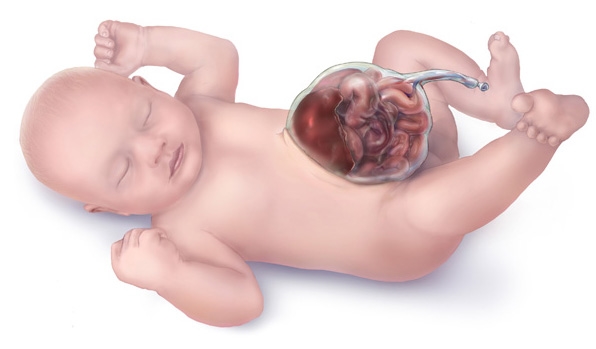 The pericardial and pleural cavities (cavitas pericardialis and cavitas pleuralis) house the heart and lungs, respectively, and the larger peritoneal cavity (cavitas peritonealis) contains the majority of the abdominal organs. These are known as the ‘human body cavities.’ The body cavities are covered with a serous membrane (tunica serosa).

Image: The dorsal and ventral body cavities. By Phil Schatz. License: CC BY 4.0.

Before the third week of pregnancy, the trilaminar germinal disk is covered with the three blastodermic layers (ectoderm, mesoderm, and endoderm) as a smooth embryonic disk, with extraembryonic cavities (the amniotic cavity and the yolk sac) already having developed. 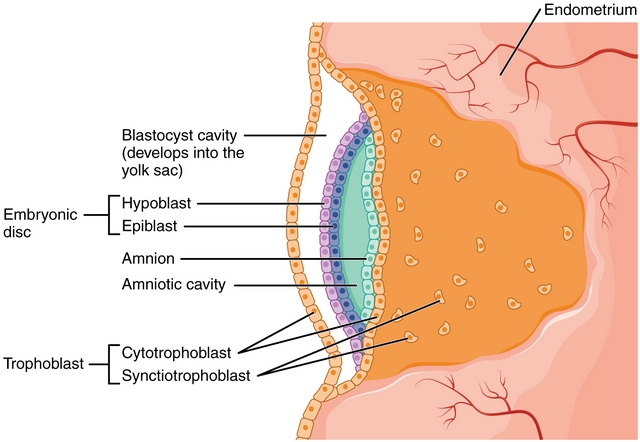 Image: Development of the embryonic disk. By Phil Schatz. License: CC BY 4.0.

The details discussed next are important to the understanding of clinical symptoms of diseases and in appreciating the relevant clinical studies.

Development of the Wall of the Trunk

For example, the C-shaped growth of the embryo results in a mushroom shape, with the edges of the mushroom hood rolling inward and growing medially until the right and left sections merge into a sort of sphere.

Simultaneously, the enclosures for the heart (heart plate) and the septum transversum (which will eventually become the diaphragm) move into the sagittal plane, the middle of the embryo. The initially cohesive body cavity forms for the first time: the intraembryonic coelom (from the Greek word koilom, which means ‘hollow space’). This coalescence leads to the formation of hollow spaces in the intraembryonic mesoderm and eventually results in body cavities.

A portion of the intraembryonic, lateral plate mesoderm cells are in contact with the ectoderm; these are called the somatopleura. The cell layer bordering the enteroderm is known as the splanchnopleura. The septum transversum forms at the intersection of the two layers.

The diaphragm forms in the sixth to eighth weeks of development via coalescence of the septum transversum and the plicae pleuraperitoneales. 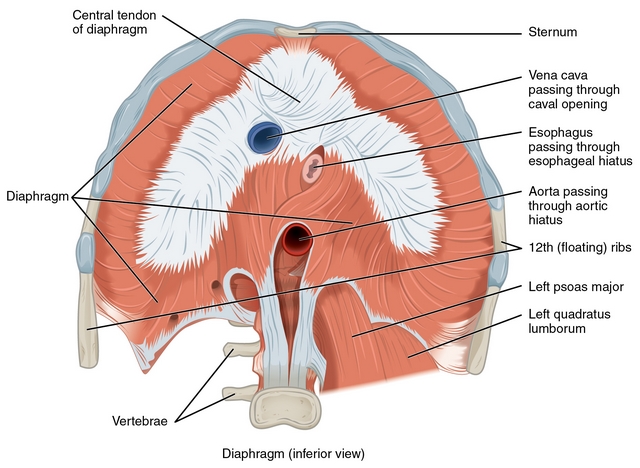 Image: Muscles of the diaphragm (inferior view). By Phil Schatz. License: CC BY 4.0.

The septum transversum grows ventrally between the heart and the liver enclosures and into the body cavity, i.e. into the intraembryonic coelom. The pleuropericardial folds (plicae pleuraperitoneales) grow against the septum transversum from the anterior, lateral trunk wall. Toward the end of the eighth week of development, these sections coalesce to form the diaphragm, separating the thorax and abdomen.

The muscles of the diaphragm first develop during the fourth month of pregnancy; they carry the precursor muscle cells from the anterior, lateral trunk wall. The innervation of the diaphragm by the nervus phrenicus occurs during the embryonic period, as the diaphragm moves in a caudal direction. During this descent, the diaphragm is innervated by the ventral branches of the cervical nerves CE–C5. 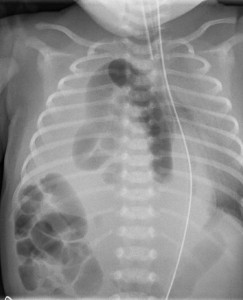 Congenital diaphragmatic hernias appear in 1 of every 10,000 births, on average. By definition, they result in the displacement of abdominal organs (stomach and intestine) into the chest cavity via gaps in the diaphragm.

The most common congenital hernia (95% of cases) is the Bochdalek hernia. Its hernial orifice is almost always located around the left trigonum lumbocostale. This weak point may also appear on the right, although in this position it is effectively ‘sealed’ by the liver on top of it.

Intestinal loops that migrate into the thorax (referred to as an enterothorax) lead to displacement and compression of the heart and lungs, depending on the size. Affected children exhibit respiratory failure, leading to asymmetric curvature of the chest cavity, and the stomach may be partially shrunken because of missing ‘contents.’ Any peristaltic sounds may be auscultated via the thorax, and air-filled intestinal loops (white) may be visible above the diaphragm in X-ray images.

A diaphragmatic hernia that is detected on ultrasonography during pregnancy is a neonatal emergency. Large hernias may result in insufficient space in the chest cavity, leading to underdevelopment (hypoplasia) of the lungs and its supplying vessels.

Formation of the Pericardial and Pleural Cavities

The first, primitive pericardial cavity forms from fissures in the mesenchyme during the fifth week of development. Initially, it is still connected to the peritoneal cavity via the canales pericardioperitoneales, because the diaphragm is not yet sealed.

The two cavities are ultimately separated by the protruding plicae pleuropericardialis and finally coalesce into the membrana pleuropericardialis; this, in turn, merges with the root of the lung at the end of the embryonic period (eighth week).

Formation of the Abdominal Cavity

The abdominal cavity also forms during the embryonic development period. Through the craniocaudal folding of the embryo, a small part of the adjacent yolk sac emerges in an intraembryonic position and is sealed into a tube, initiating intestinal development.

The developing intestine lying in the simple body cavity (intraembryonic coelom) is stretched by the enormous growth in length, leading to the formation of anterior and posterior intestinal portals, carrying a connection to the yolk sac and located externally: the omphalomesenteric duct (ductus omphaloentericus, ductus vitellinus).

The omphalomesenteric duct plays a role in the physiologic umbilical hernia and in formation of the umbilical cord. In addition, it may rarely persist in adults, as a so-called Meckel’s diverticulum on the small intestine.

Note: The intestinal tube is formed by intraembryonic segments of the yolk sac.

The growing intestine is divided into the foregut, the midgut, and the hindgut. The foregut later forms the stomatodeum, i.e. the beginning of the gastrointestinal system; it is sealed by the buccopharyngeal membrane. At the anterior intestinal porta (the hindgut), the cloacal membrane forms the border with the amniotic cavity.

The rapid growth of the midgut leads to a lack of space in the situs of the embryo. Therefore, a hernial sac with intestinal loops and vessels (which will eventually form the arteria mesenterica superior) moves into the extraembryonic coelom (also called the ‘umbilical coelom’) during the 8th to 11th weeks of development. The intestinal segments continue to grow within this structure and eventually turn on the axis of the vessels (once at 270° counterclockwise).

The individual intestinal segments are now located together in their proper positions. Subsequently, they are relocated into the body cavity after the longitudinal growth of the embryo. Clinical symptoms of an omphalocele (see below) appear in the absence of this step.

At this point, the aforementioned connection between the U-shaped midgut and the yolk sac still exists: the ductus omphaloentericus (also called the ‘ductus vitellinus’ or the ‘omphalomesenteric duct’) virtually ‘pulls’ the intestinal loops out and, upon further development, becomes narrow and sealed. After the intestine has returned to the situs, this duct becomes a structural component during formation of the umbilical cord.

The omphalomesenteric duct is also important for adults: a Meckel’s diverticulum may remain if regression is poor. If the intestine is not completely withdrawn into the body during the physiologic umbilical hernia, clinical symptoms of an omphalocele appear, and intestinal loops may be found outside the body during birth (see below).

Development of the mesenteries and division of the peritoneal cavity

The intestines located within the body are also fixed to the abdomen by the mesenteries. The midgut initially carries two mesenteries on its upper segments (mesenterium ventrale and mesenterium dorsale), which connect the intestinal tube with the anterior and posterior walls of the peritoneal cavity. 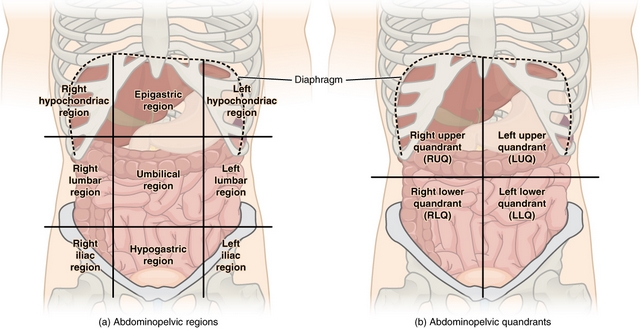 Image: Regions and quadrants of the peritoneal cavity. By Phil Schatz. License: CC BY 4.0.

The upper segment of the peritoneal cavity is divided into right and left sections by these mesenteries during development. The caudal part of the esophagus, the stomach and the upper duodenum, form from this upper part of the midgut.

The lower section of the intestine is merely held in place by mesenterium dorsale, resulting in a single cavity in the lower portion of the peritoneal cavity into which the dorsal intestinal tube extends. 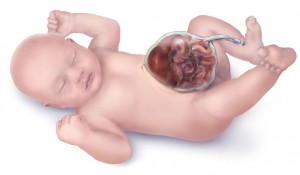 Image: Drawing of an omphalocele. By the Centers for Disease Control and Prevention. License: CC BY-SA 3.0.

When the intestinal loops fail to return to the developing body after the physiologic umbilical hernia, a portion of the abdominal viscera may remain in the hernial sac of the umbilical cord. This defect is referred to as omphalocele or an umbilical cord hernia.

In most cases, they are parts of the small intestine or the liver. A persistent umbilical hernia can be diagnosed during pregnancy with the use of ultrasonography. Because of the high risk of infection, affected neonates require surgical treatment immediately after birth.

In the event of an umbilical cord hernia, other malformations occur in 40% of cases, often leading to right lateral laparoschisis (abdominal wall defect), in which abdominal organs protrude from the right side of the body, uncovered and usually infected, warranting careful surgery. 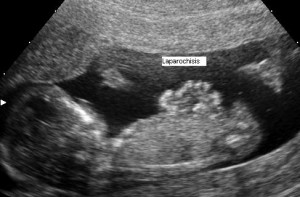 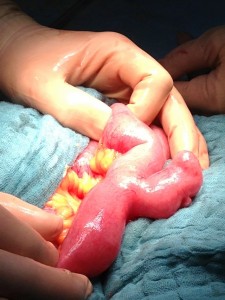 The protrusion of the small intestinal wall may remain in the individual as a remnant of the omphalomesenteric duct. It occurs in 1–2% of the population and occurs more frequently in men.

Because of the early embryonic formation of the omphalomesenteric duct, the Meckel’s diverticulum (as its remnant) not only receives intestinal mucus but in over 50% of cases may involve gastric mucus cells, cells from the large intestine, and cells from the pancreas.

Generally, a Meckel’s diverticulum is located 50–75 cm (19.6–29.5 in.) proximal to the ileocecal junction (ICJ). In most cases, such a diverticulum remains asymptomatic. In the event of inflammation, however, it may result in gastrointestinal bleeding and peritonitis, and patients exhibit colicky pain and symptoms similar to those of inflammation of the appendix (appendicitis).

Tip: Most terms in embryology are Greek or Latin in origin. Do an internet search for a translation in order to better understand the terminology.

You can learn more about embryology in the Lecturio course on general and special embryology from Dr. Steffen-Boris Wirth or on the page embryology.ch of the Universities of Fribourg, Lausanne, and Bern.