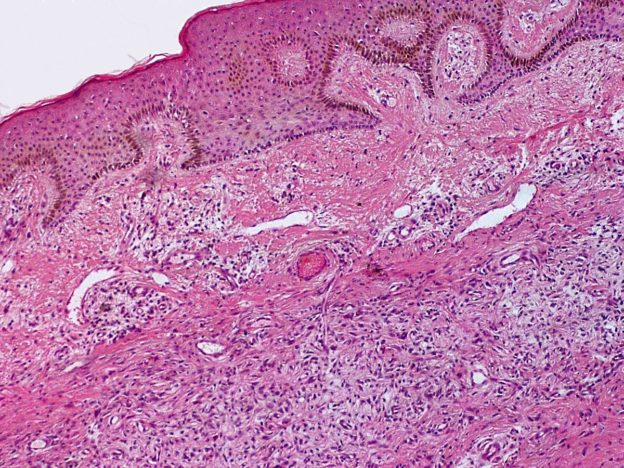 Definition and Epidemiology of Dermatofibromas

Dermatofibroma is a common mesenchymal growth of the skin where skin fibroblasts are the major cell constituents. It is also known as cutaneous benign fibrous histiocytoma or sclerosing hemangioma.

A common mesenchymal tumor of the skin, dermatofibroma is known to have a similar occurrence across all races. There is a predilection for women, mostly occurring in the lower legs, and in early adulthood, from 20 to 30 years of age. It can, however, occur at any age. The estimated female to male ratio of occurrence is 2.6 to 1. The average age at the time of presentation is 36.2 years.

The exact mechanism for the development of a dermatofibroma is unknown, and clinicians are divided on whether it is a reactive process or a neoplastic one. Associations with trauma and insect bites have led some to believe that a reparative or reactive process may be the underlying pathology. However, recent demonstrations of chromosomal abnormalities and clonal proliferation have hinted more towards a neoplastic mechanism.

More likely, however, it is likely to arise from a distortion of protein kinase C activity. Immunohistochemical testing results have been found to be more consistent with the presence of factor XIIIa and fascin (dendritic cell markers) than with MAC – 387, a histiocyte marker.

Mast cells are found in abnormally high numbers in dermatofibroma. They release fibrogenic factors like transforming growth factor-beta (TGF beta) and trigger the fibrosis seen in dermatofibroma. In the epithelioid and atypical dermatofibroma variants specifically, ALK gene rearrangement and overexpression have been implicated. 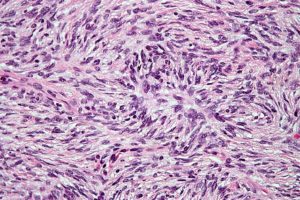 The deep variant of dermatofibroma may be confused with an entity called dermatofibrosarcoma protuberans that is rather typically found on the trunk in younger adults. The size of this lesion is much larger, approximately 1–2cm.

In ambiguous cases, where the histological picture of the cellular variant closely resembles that of dermatofibrosarcoma protuberans, immunolabeling can be useful in distinguishing the factor XIIIa- and fascin-positive dermatofibroma from the latter (found to be negative for these markers).

However, the following skin pathologies are also to be considered in the differential:

While the diagnosis of dermatofibroma is usually made clinically, confirmation can be undertaken by histological analysis on biopsy.

Histological pictures obtained on punch biopsy of the lesion reveal information on not just the type of variant but also help in making crucial decisions regarding management.

A typical picture that is most often encountered is: 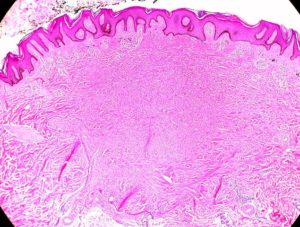 A cellular variant shows a storiform arrangement embedded in the deep dermis, with a much larger size and increased cellularity. It may often extend into the superficial subcutaneous tissue making it difficult to distinguish from an entity called dermatofibrosarcoma protuberans.

A rare form of atypical variant shows atypical features against a background of the classic picture of dermatofibroma. Pleomorphic, spindle-shaped, plump, or polyhedral-shaped cells are seen with keloidal collagen and storiform arrangement. The histopathological classification of dermatofibromas is given below:

Visualization under a dermatoscope usually presents a peripheral pigment network with a central white area.

Indicated in cases where immunosuppressive conditions are suspected.

An intervention is usually not indicated in asymptomatic cases, which constitute the majority. Watchful waiting and reassurance suffice.