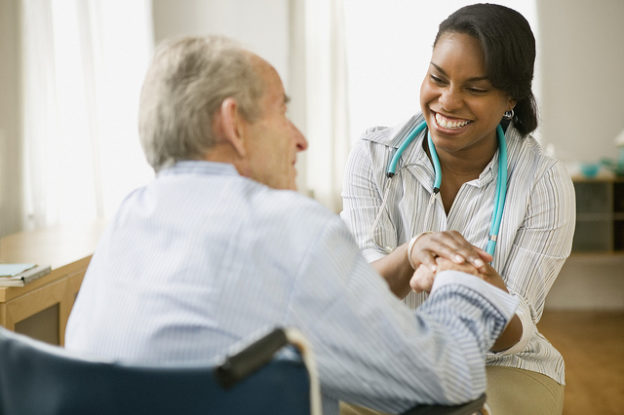 Image : “Checking in with a Patient” by myfuture.com. License: CC BY-ND 2.0

Dementia is a syndrome of impairment of cognition and memory accompanied by interference with activities of daily living, without a disturbance in consciousness or level of alertness.

Impairment of cognition may involve:

Above 65 years of age, dementia will develop in approximately 17–20%. About 70% of those who develop dementia have Alzheimer disease dementia, 17% have vascular disease, and 13% have dementia with Lewy bodies, Parkinson-related dementia, alcoholic dementia, or frontal lobe dementia. It is estimated that 36 million people worldwide were diagnosed with dementia in 2011.

The disease is more common among the elderly, and its prevalence increases with age to a rate of ≥ 20% for patients over the age of 85 years. There is a 10–15% chance of developing Alzheimer disease from mild dementia. The average survival period of dementia patients is 4.5 years.

Due to alterations in the ability to perform daily functions, the syndrome has a serious economic and social impact as these patients require a helper and must take medications for the rest of their life.

Dementia arises from neurodegeneration of the basal ganglia, thalamus, and cerebral cortex. Dementia has several possible causes, which categorizes it into different types. Although the causes of these types of dementias differ, their clinical presentations may overlap with some distinctive features.

The various types of dementia include:

Alzheimer disease, the most common cause of dementia, accounts for 70–80% of dementia cases.

Vascular dementia is defined as a decline in mental function caused by brain damage after the insufficient or impaired blood supply to the brain.

It is the second most common cause of dementia after Alzheimer disease, and it accounts for about 10% of cases.

Vascular dementia is classified into

It is caused by a stroke that blocks an artery to a specific region of the brain or by narrowing of blood vessels.

The risk factors for stroke, such as alcohol use, smoking, and the presence of vascular disease, also increase the risk of developing vascular dementia. Vascular blockage results from a stroke or a pathogenic narrowing of the vessel that compromises the distal flow of blood.

This leads to ischemia-induced demyelination or axonal loss in the areas that are responsible for memory and behavior control.

There is no specific diagnostic test for vascular dementia, but tests are done to correlate clinical findings and to help confirm the diagnosis.

Studies show that patients with vascular dementia survive for an average of 3 years. However, some dementias may improve with the resolution of stroke symptoms. This feature is attributed to the development of new vessels that vascularize the ischemic part of the brain.

Dementia with Lewy bodies is defined as a type of dementia that develops progressively with abnormal deposition of Lewy bodies responsible for impaired mental functions related to thinking, movement, behavior, and mood.

It is the third cause of dementia after Alzheimer disease and vascular dementia, and it accounts for 10% of cases. It has a slight male predilection. The disease is more common among the elderly population with the age for peak incidence being 50–85 years.

The cause of the disorder is largely unknown but several factors have been associated with increased incidence. The mutation in the CYP2D6B gene confers susceptibility to interruption of the metabolic pathway of environmental toxins in the brain. α-Synuclein proteins are the chief components of Lewy bodies. They are found abundantly in brain cells of people suffering from DLB, Parkinson disease dementia, and Alzheimer disease.

The presence of Lewy bodies alters the level of neurotransmitters and neuromodulators in the brain, principally dopamine. This depletion compromises the flow of information from the striatum to the neocortex. It begins in the brainstem and later spreads to the outer layers of the brain that are involved in perception and behavior.

Dementia with Lewy bodies commonly presents with features seen in other diseases. They include motor features of Parkinson disease, such as:

Other features of the disease include:

Note: It is always necessary to differentiate the three conditions based on specific clinical findings in one condition but not in the other.

Important findings on physical examination include:

The diagnosis is made from clinical findings. Investigations are done to support the diagnosis or to rule out other likely differential diagnoses.

There are no medications to halt the progress or completely cure the disease. Available medications focus on the improvement of the quality of life by symptomatic relief.

Parkinson disease is the second most common neurodegenerative disorder and the most common movement disorder. It is characterized by progressive loss of muscle control, which leads to trembling of the limbs and head while at rest, stiffness, slowness, and impaired balance. The disease affects approximately 1 percent of persons older than 60 years, and up to 4 percent of those older than 80 years.

Parkinson disease dementia results from the presence of α-synuclein deposits like those seen in dementia with Lewy bodies. There is the loss of pigmented dopaminergic neurons in the substantia nigra pars compacta (SNpc) and the presence of Lewy bodies. This leads to destruction of brain cells and depletion of dopamine (the hormone that controls muscle coordination) in the basal ganglia.

The electrophysiologic changes, such as altered discharge rates, increased incidence of burst firing, interneural compatibility, oscillatory activity, and altered sensorimotor processing, in the basal ganglia, thalamus, and cerebral cortex, adversely affect voluntary movements of extremities and sensory functions. The disease thus represents a movement disorder; upon involvement of other brain areas that control memory and concentration, it results in dementia.

Like other causes of dementia, available tests are used to support the diagnosis or rule out differential diagnoses. The clinical representation of Parkinson disease is the guideline for the diagnosis and imaging of the brain should be done to rule out tumors or vascular diseases that may cause motor symptoms and dementia.

Symptomatic relief is achieved by:

Frontotemporal dementia is a rare cause of dementia that is more common in the younger population. The peak age of incidence of the disease is 45–65 years.

It has no sex predilection as seen with other types of dementia.

A genetic mutation in MAPY, GPN, and C90RF72 genes.

The brain regions responsible for behavioral reactions, speech, and emotional reactions shrink due to progressive damage to the neurons in these areas. Death of these brain cells (neurons) is thought to arise from the presence of abnormal proteins in these cells. Progression of the disease damages the connecting neurons in these regions and leads to changes in behavior, speech, and personality with intact memory.

Presentation of the three main variants determines its classification:

The diagnosis is made from clinical findings and investigations are done to support the diagnosis or to rule out other likely differential diagnoses.

Care of these patients involves:

Just like dementia, delirium is not a disease but a syndrome of disturbance in consciousness, featuring abrupt change in cognition. The syndrome is characterized by clouding of consciousness, restlessness, confusion, psychomotor retardation or agitation, and affective lability.

Delirium is caused by

It has been classified into

The differences are clear and should be looked for during diagnosis. While delirium is always of acute onset, dementia progresses gradually with worsening of the symptoms. Patients with dementia are consciously alert and pay attention to the current happenings whereas patients with delirium have altered consciousness levels. Dementia symptoms are worse in daytime whereas delirium symptoms may fluctuate with some improvement during the day and worsening at night.

Difference between delirium and dementia