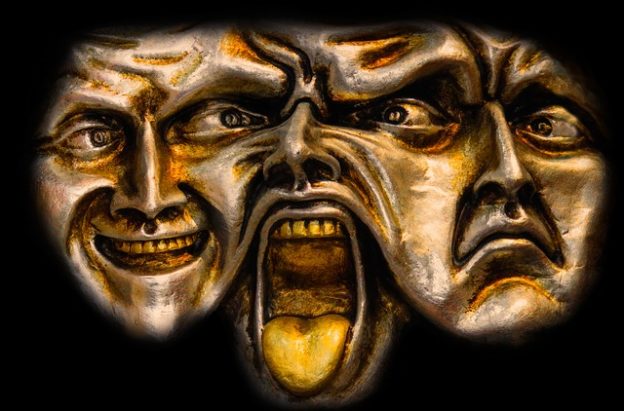 Acting out entails a strong display of emotions or behavior in order to hide the unacceptable underlying feelings or ideas. The displayed outburst or action may be socially inappropriate. This results in the actual emotion being masked.

Example 1: A 16-year-old boy overreacts to cover up the underlying feelings of pain or emotional vulnerability.

Example 2: A woman whose boyfriend just broke up with her becomes extremely sexually promiscuous to avoid dealing with the pain and the rejection.

Avoiding an obvious aspect of reality by pretending that it is false or that it does not exist thus blocking the external events from awareness. Facing this aspect may be painful.

Example 1: Despite the fact that she received an official letter about the death of her husband on the battlefield, the soldier’s wife continues to believe that her husband will return home and keeps the house clean for him.

Example 2: A 34-year-old factory worker spends most of his salary on alcohol and cigarettes, and claims that he only drinks and smokes occasionally, insisting that he does not have a problem.

Reverting to a behavior that is more childlike (or otherwise younger than age). Regression can be seen in people without any mental disabilities who are sick or otherwise uncomfortable. Playing games can also be seen as regressive behavior.

Example 1: After being fired from his job, the 38-year-old man comes home and lies curled up on the bed in the fetal position.

Example 2: When the second child was born, the older 3-year-old child starts having temper tantrums again or insists on drinking breast milk as well.

Attributing one’s own feelings, desires, or thoughts to someone else. This is associated with or may lead to paranoia. Thoughts that are commonly projected involve those that are likely to cause guilt such as aggressive behavior and sexual fantasies.

Example 1: A man who had extramarital sex is convinced that it is, in fact, his partner who is having an affair.

Example 2: A person with low self-esteem gets anxious around other people and says that other people make her uncomfortable.

Emulating behaviors of someone who is perceived to be more powerful. This is the opposite of the projection. The patterned behavior can be either positive or negative and occurs at a subconscious level. Conscious patterning is referred to as imitation.

Example: A typical example is children acting like parents without realizing it.

Helping others to feel better about oneself, thereby avoiding negative personal feelings. Here, gratification is achieved from the response of others.

Example 1: A cruel CEO regularly donates to charity and takes part in the charity organization activities.

Example 2: Alcoholics who help other alcoholics stay sober by being a sponsor in the alcoholics anonymous program.

Expressing uncomfortable feelings (in the form of jokes, for example) without causing oneself discomfort.

Example 1: A man who has sleep apnea makes jokes about people using the CPAP machine.

Example 2: An expert makes a mistake in front of the trainees and then laughs about it saying that the trainees are already smarter than she is.

Expressing a personally unacceptable or unattainable feeling in a socially acceptable or useful way. Sublimation leads to the gratification of the impulse for social benefit.

Example 1: Artistic expression is often believed to be a result of sublimation.

Example 2: A teenager who often gets into fights starts playing sports heavily, including boxing.

Pushing the unpleasant or unacceptable feeling, thought, or desire deliberately out of consciousness. It is the only defense mechanism to have some sort of conscious effort, albeit partial.

Example 1: A project manager needs to prepare for an important presentation, and her friends want to know about her weekend plans. She ignores their messages and continues working, and deals with them after the presentation.

Example 2: A mother is angry because she found out her son has been stealing money. Because he has a test the next day, she waits until after the test to confront him.

Trying to excessively manage or regulate the external environment to avoid the underlying feeling of anxiety.

Example: When Tom heard about the accident of his friend’s toddler while trying to open the drawer, to avoid harm to his own baby, he immediately baby-proofed the entire apartment, installed cameras and sensors, hired two nannies, and vacuum-cleaned all surfaces.

The emotion remaining the same, the target of the emotional outlet is changed. This is different from acting out in that the primary emotion is not masked, only redirected. Displacement’s target often moves from higher to lower in the hierarchy.

Example 1: A girl who is angry at her boyfriend hurls objects of glass at the wall.

Example 2: A husband who is angry at his boss shouts at his wife on reaching home.

Using higher functions (excessively) instead of affect to deal with unpleasant facts or situations. Dealing with emotions is avoided, and the intellectual content may be too academic in nature, drained of any affective content. It may sometimes be difficult to differentiate intellectualization as a defense mechanism from patients who use intellect defensively.

Example 1: When faced with a tough, highly competitive test, a student excessively discusses the statistics of passing and methods of attempting the exam with his friends.

Example 2: When a surgeon’s patient is dying on the operating table because of a mistake, she calmly explains the technical details and complications of the procedure to the surrounding students.

Separating the event from the emotions that accompany it. Thus, there is a failure of expression of any emotion with the event.

Example 1: A man whose wife just died conveys this news to his relatives in an emotionless, deadpan manner.

Example 2: A woman with a long history of abuse recounts the incidents matter-of-factly, without any emotion or affect.

Unacceptable or irrational feelings, outcomes, or behaviors are acknowledged and justified by reasonable explanations. Note the plural as this is often a string of reasons used to avoid the underlying feelings of shame and/or guilt. This is seen in patients with obsessive-compulsive behaviors.

Example 1: A single working mother takes recreational drugs every now and justifies it by saying that one should try everything in life and live on the edge.

Example 2: People cheating on their spouses may justify their actions by altering their definition of ‘cheating’ or ‘sex’. For example, kissing or fondling does not constitute cheating.

A manifestation of a feeling and/or action that is diametrically opposite to that of the underlying unacceptable impulse. Thus, there is a transformation of the feeling to its exact opposite.

Example 1: A typical example is two people who fight with each other all the time although they like each other very much.

Example 2: The born-again ideology (e.g. born-again religious persons) is another typical example of reaction formation where the person intrigued by or indulging in certain ideas (e.g. sex or related activities) becomes a strong, outspoken voice against those feelings, ideas, or actions.

An unpleasant or unacceptable feeling or thought is completely pushed out from consciousness.

Important: This differs from suppression in that the thought or feeling is unconsciously eliminated and the content can no longer be obtained, except perhaps with psychotherapy or because of some major trauma.

Example 1: A typical example is victims of sexual abuse, who often repress these painful memories, which then become very hard to access.

Example 2: A woman who helped a tyrannical dictator commit heinous crimes cannot recall any of that.

Characterizing people or events into black and white categories of  ‘good’ or ‘bad’ (or variations thereof). This typically occurs in patients with a borderline personality disorder, who tend to view the world in such extremes without any gray area.

Example 1: A patient tells the nurse that she is angelic whereas the doctor is the devil.

Example 2: A teenage girl who thought that a boy was the most perfect, kind, and wonderful man in the whole world begins to think him as ugly, downright intolerant, and disgusting after he did not accept her Facebook friend request.

Behaving or acting in a way so as to reverse unacceptable behavior. This underlying belief aims to ‘correct’ a past mistake. This may involve rituals to “un-do” a “sinful” thought or action.

Example 1: A typical example of undoing is the religious penance, including praying and confessing one’s sins.

Example 2: Another well-known example is that of Shakespeare’s Lady Macbeth, who murders a king and then compulsively washes her hands afterward.

An autistic retreat into an imaginary life to avoid facing unacceptable feelings or the unpleasant reality.

Example: A victim of physical abuse imagines that he lives in a happy cartoon world where everybody has one minor superpower, his being a permanent force field around him that prevents people from touching him directly.

Separating one part or aspect of a one’s personality or behavior from the self or reality or the main conscious self, primarily in order to avoid conflict between contrasting beliefs or emotions.

Sometimes, this is manifested as taking a third-person perspective on the potential conflict-causing event, or hypnotic trances or fugues. This protects the self from the responsibility of one’s action or feeling. Dissociation can lead to dissociative disorders.

Important: This differs from the projection in that the feeling or action is not attributed to someone else.

Example 2: Victims of sexual abuse sometimes describe the moment as if experiencing as an outsider while floating near the ceiling.

As the name suggests, it is a passive (indirect) way of expressing aggression. It is manifested as setting up an expectation and then not meeting it. However, this feeling often operates at a subconscious level. This is typically seen in children and patients with a borderline personality disorder.

Example: An office worker has a discussion with his manager about the improvements he needs to do. He agrees to do it in the meeting but does not do anything in the end.