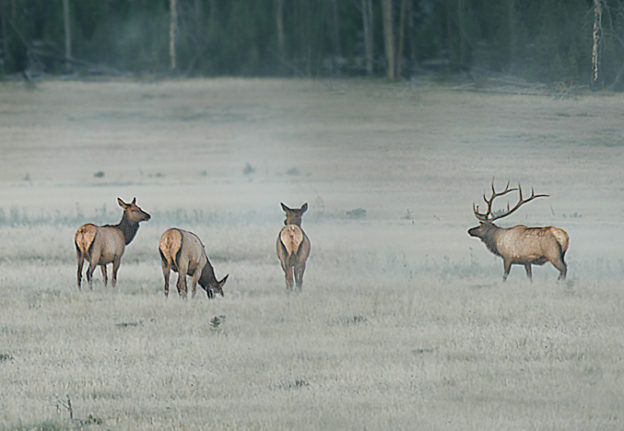 Image: “Bull elk herd at the crack of dawn between Noris and Canyon village.” by Anayst – Own work. License: CC BY-SA 3.0

Chronic Wasting Disease first came into notice and was identified in 1967 in Colorado, USA, and it was found in free and captive animals. Ultimately, due to muscle wasting and weight loss, it leads to death.

Reports are being made about the disease occurrence in the human population, but there is no definitive data to prove that. One epidemiological study states that in the areas where the disease has been reported, the hunters should avoid eating deer or moose as a precautionary measure.

Clinical Signs and Symptoms of CWD

The disease usually affects adult cattle, but the lowest age at which it has been identified is 17 months. The earliest signs that come into notice are difficulty in movement and walking.

Many animals die during early illness due to aspiration pneumonia and poor health, so it becomes difficult to diagnose them. Definitive diagnosis can only be made by examining the post mortem specimens’ brain and spinal cord.

On microscopic examinations, the lesions resemble those of the other prion diseases. The prion proteins can be visualized by using immune-histochemical stains in the brain, lymph, and other tissues. The gold standard for diagnosis is obex with positive IHC findings.

Diagnosis can also be made by bioassay of fluids from the suspected animal and incubating them in mice. However, this method is considered to be unethical, and that is why it is not used in practice.

The origin of the disease is still unknown, but some researchers suggest that the prion protein is excreted in the urine. It, then, contaminates the soil, and animals feeding on that grass can acquire the disease.

Animals born in captivity and in the wild are equally affected by the disease. Transmission can occur in animals who feed and drink from the same source as the prion protein is secreted in the saliva as well, so animals sharing the same water source are more prone to develop the disease. Maternal transmission can also occur. 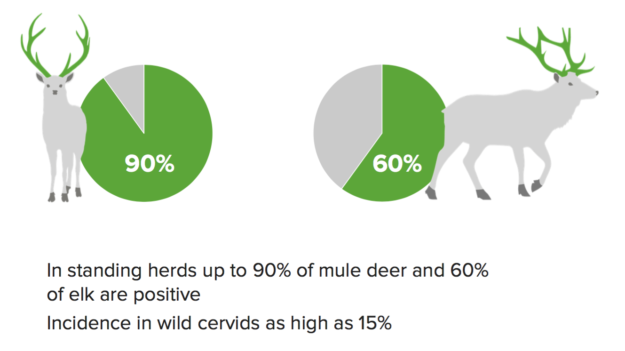 Chronic wasting disease is transmitted via body tissues and fluids directly. Research done on rocky mountain elk showed that the infected animals transferred the disease into 80% of the offspring transplacentally. 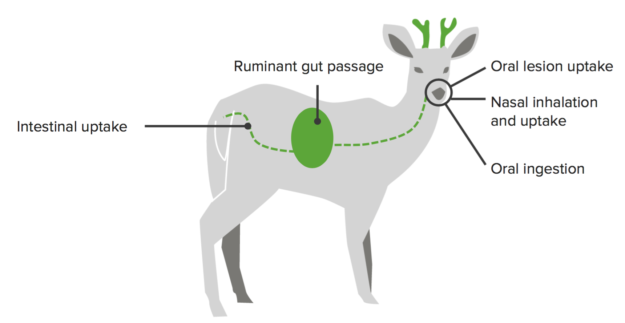 Research has shown that Black-tailed deer and European red deer are naturally susceptible to the disease as compared to other populations of deer.

Environmental transmission occurs directly from the body tissues as well as from the contaminated environment. Prion proteins can survive for many years in the soil, and they remain infective for long periods of time. The chronic wasting disease prion adheres tightly to the soil, and this soil can serve as a major source of disease transmission.

There is no evidence of transmission to humans till date. The disease cannot be transmitted by the infected animal.

Recent Research Questions about CWD That were Answered

Extensive research has been performed to answer three important questions about CWD:

Can CWD be transmitted to humans?

The current laboratory and experimental studies show that the transmission’s risk to humans or humanized mice strains is low. The issue with these research studies is that they use the classical form of the prion. Recent discoveries have shed light on the possibility of emergence of new prions in deer that can cause CWD and the transmissibility of these strains to humans is yet to be explored.

CWD is more frequent in Wyoming and Colorado, however, the incidence of Crutzfeldt-Jakob disease (CJD), the humanized form of the prion disease, was not found to be higher in these geographic areas. This might point towards the possibility that CWD cannot be transmitted to humans.

The main problem with these studies is that they make an assumption that cannot be proved to be true or accurate. They assume that the incubation period of CWD is the same as that of the bovine form in humans. If the incubation period of CWD in humans is much longer, then there still might be an existent risk of transmission of the disease to humans.

Accordingly, the current recommendation is to avoid eating animals or being exposed to animals that have been infected with the prion.

Can the species barrier for CWD to humans be crossed?

Per the previous discussion, one can assume that there is a species barrier for CWD that makes interspecies transmission unlikely. The possibility of crossing this species barrier is quite possible if one of the following scenarios happened:

How can we stop the spread and transmission of CWD?

Recently, new noninvasive and preclinical diagnostic tools for live animals that depend on the sampling of feces were developed. These tools will make the early diagnosis of CWD possible. Aggressive surveillance and culling herds that are infected can limit the transmission of the disease. This has been done before in Norway and North America.

Quarantine and depopulation of CWD-affected herds in captive animals are now encouraged and considered as standard in the care of deer and other animals that are known to be at risk of acquiring CWD. Again, the success of these methods is still limited because the environmental reservoirs of CWD prions are believed to be sufficient to sustain disease incidence in captive and free animals.

Study Shows Prions Stick Around In Certain Soils via sciencedaily.com