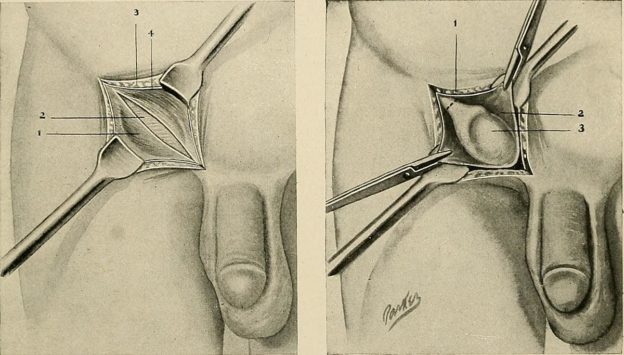 Cryptorchidism is the failure of the testicles to descend into the scrotum. Several forms of undescended testis exist and true cryptorchidism means that the testicle is not palpable; it can be either intra-abdominal or completely absent.

The gonads initially develop from the mesothelial layer of the peritoneum as well as the mesonephros. At 5–6 weeks of gestation, germ cells migrate from near the allantois and colonize the primordial gonads. The germ cells colonize the seminiferous cords of the medulla, becoming spermatogonia.

The testis in its earliest stages consists of a central mass covered by a surface epithelium. A series of cords appear in this mass, and its periphery is converted into the tunica albuginea, thus excluding the surface epithelium from any part in the formation of the tissue of the testis. The cords of the central mass run together toward the future hilum and form a network that ultimately becomes the rate of testis at the hilum of the testicle.

Descent of the testes

Testicular descent consists of the opening of a connection from the testis to its final location at the anterior abdominal wall, followed by the development of the gubernaculum, which subsequently pulls and translocates the testis down into the developing scrotum. Ultimately, the passageway closes behind the testis.

A failure of this process causes an indirect inguinal hernia. These hernias are common in children and are so named because the defect follows the oblique course of the vas and testicular vessels inside the inguinal canal. A direct inguinal hernia is the result of a weakened area on the floor of the inguinal canal and in the transversals fascia, located medially to the course of the vas. All hernias are covered by parietal peritoneum.

Opening of a connection

Early in fetal development, the testes are placed at the back part of the abdominal cavity, behind the peritoneum, and each is attached by a peritoneal fold, the mesorchium, to the mesonephros. From the front of the mesonephros, a fold of peritoneum called the inguinal fold grows forward to meet and fuse with a peritoneal fold, the inguinal crest, which grows backward from the anterolateral abdominal wall. The testes thus acquire an indirect connection with the anterior abdominal wall. At the same time, a portion of the peritoneal cavity lateral to these fused folds is marked off as the future tunica vaginalis.

The gubernaculum grows into a thick cord. It ends at the abdominal inguinal ring in a tube of the peritoneum, the saccus vaginalis, which protrudes down the inguinal canal. By the 5th month of gestation, the lower part of the gubernaculum still is a thick cord, while the upper part has disappeared. The lower part now consists of a central core of smooth muscle fibers, surrounded by a firm layer of striated muscle elements. These are connected behind the peritoneum to the abdominal wall.

As the testis develops, the main portion of the lower end of the gubernaculum is carried, following the skin to which it is attached, to the bottom of this pouch. The tube of peritoneum constituting the saccus vaginalis projects itself downward into the inguinal canal, and emerges at the external inguinal ring, pushing ahead of it a part of the obliquus internus and the aponeurosis of the obliquus externus, which form the cremaster muscle and the external spermatic fascia, respectively.

The saccus vaginalis forms a gradually elongating pouch, which eventually reaches the bottom of the scrotum. Behind this pouch, the testis is drawn by the growth of the fetus, as the gubernaculum does not grow proportionately with the growth of other parts. Thus, the testis, because it is attached by the gubernaculum to the bottom of the scrotum, is prevented from ascending as the body grows, and is instead drawn first into the inguinal canal and eventually into the scrotum.

It is likely that the gubernacular cord also becomes shortened as development proceeds, causing the testis to reach the bottom of the scrotum.

By the end of the 8th month of gestation, the testis has reached the scrotum, preceded by the saccus vaginalis, which communicates by its upper extremity with the peritoneal cavity. Just before birth, the upper part of the saccus vaginalis, at the internal inguinal ring, usually becomes closed, and this closure extends gradually downward to within a short distance of the testis. The process of peritoneum surrounding the testis is now entirely cut off from the general peritoneal cavity and constitutes the tunica vaginalis.

The exact cause of cryptorchidism is still unknown; however, several risk factors have been linked to the condition. The most common risk factor is premature birth and/or a birth weight that is lower than 2.5 kg. The testes are formed intra-abdominally and they undergo a highly regulated descent process to eventually reside in the scrotum. Premature boys simply do not complete this normal descent process.

Placental insufficiency and low maternal estrogen levels have also been linked to the development of cryptorchidism.

These factors all have been linked to an increased risk of undescended testes and maldevelopment of the male reproductive system.

There are several theories regarding how cryptorchidism may occur. An anatomical structure called the gubernaculum testis is responsible for widening the inguinal canal and guiding the descent of the testis into the scrotum. This structure is normally attached to the scrotum and tunica vaginalis. Any abnormality in the attachment or configuration of this structure can lead to cryptorchidism.

Additionally, patients with gastroschisis and other conditions with malfunctioning or absent abdominal wall muscles are known to have low intra-abdominal pressure. This is hypothesized to be responsible for maldescent of the testis in this group of patients.

The undescended testis can have anatomical or functional abnormalities that can be confirmed by histologic examination. These abnormalities can cause the testis to fail to descend and are also responsible for the increased risks of infertility and testicular cancer in the affected testis.

Finally, premature boys can have undescended testes because the testes simply did not start or complete their course to the scrotum. The testes remain inside the abdominal cavity, retroperitoneally, until 28 weeks of gestation.

The testicular examination is critical to diagnosing patients with cryptorchidism. Cold hands, sudden palpation, and anxiety can activate the cremasteric reflex, causing the testis to retract upward and into the inguinal outer opening. Thus, an examination should be performed using 2 warmed hands to gently push the testis downwards. Even with these measures, however, testicular examination in young children remains a challenge and should be performed by an experienced pediatric urologist, if possible.

Laboratory investigations are not needed unless the patient has bilateral undescended testes. In this case, karyotyping is indicated to exclude a female karyotype with adrenogenital syndrome.

Patients with a nonpalpable unilateral undescended testis should undergo ultrasonography, MRI, or laparoscopy to determine the presence and structure of the testis.

Ultrasonography has good sensitivity and specificity for detection of an inguinal undescended testis but can prove to be more difficult for intra-abdominal testes. Magnetic resonance imaging can visualize nonpalpable intra-abdominal testicles but laparoscopy is recommended, as it can be both diagnostic and therapeutic.

The treatment of undescended testis is dependent mainly on its location. The 1st step is to wait and see until the infant is 6 months old, as 4 out of 5 patients experience spontaneous descent.

It is recommended that patients with nonpalpable intra-abdominal testis undergo a laparoscopy that is both diagnostic and therapeutic. During laparoscopy, the testis should be identified and fixated on the scrotum. The success rate of laparoscopic orchidopexy is 90%.