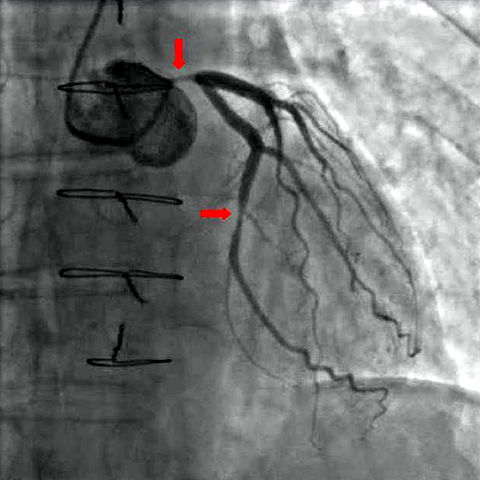 Coronary-subclavian steal syndrome is a rare complication of coronary artery bypass grafting (CABG). The condition usually occurs due to stenosis of the left subclavian artery, which is proximal to the left internal mammary artery, comprising the myocardial blood flow.

It is mostly the result of long-standing subclavian stenosis that occurs due to the progression of stenosis following CABG.

Coronary artery disease (CAD) and peripheral artery disease (PAD) prevalence, morbidity, and mortality rates are high in the developed world. The progression of atherosclerotic lesions is usually cited as the cause of CAD in patients with a history of this condition and earlier coronary revascularization for angina pectoris.

Coronary steal syndrome usually occurs when a patient is taking certain types of vasodilator drugs, such as:

Risk factors for developing atherosclerotic plaques are categorized as either modifiable or nonmodifiable. Non-modifiable risk factors include:

Coronary-subclavian steal syndrome occurs via the shunting of well-oxygenated blood from a critical area of low perfusion to an area of low perfusion. It may be iatrogenic and can be seen in pharmacologic stress imaging by using dipyridamole to induce vasoconstriction. This leads to reduced blood flow to the subendocardium distal and to the site of the stenosed coronary artery.

Through exercise, distinctive and metabolite-induced vasodilation leads to a drop in peripheral resistance in the upper-limb vessels. The gap between arterial inflow and metabolic demand may result in arm claudication. Additionally, when there is an increase in retrograde flow through the ipsilateral vertebral artery, it may “steal” blood away from the cerebral circulation.

Coronary-subclavian steal syndrome is characterized by retrograde flow of blood from the left internal mammary artery to the left subclavian artery when a proximal left SA stenosis is present. It is usually asymptomatic. When it becomes symptomatic, patients can experience:

Coronary-subclavian steal syndrome is usually suspected in patients who complain of recurrent angina pains after having undergone CABG with an internal thoracic artery graft. A bilateral preoperative blood pressure measurement should also be performed on these patients.

Coronary steal syndrome can be diagnosed by:

Percutaneous intervention is considered the first line of treatment. It includes:

These treatment approaches have many advantages, including:

Surgical intervention may also be considered in some cases. Placement of a clip on the anastomotic channel or on the bypass of the channel with a vein graft in order to induce occlusion may be performed. ECA endarterectomy or angioplasty/stenting is performed for external carotid artery stenosis/occlusion. Indications for the procedure include:

When none of these criteria are present, however, there is no need for a patient to undergo this type of major surgical procedure.

Revision using distal flow is performed in cases of high-flow cardiac failure due to brachial arteriovenous fistula access. This method includes the closure of the anastomosis in the antecubital fossa and then the imposition of a graft between the forearm ulnar or radial artery. It effectively reduces blood flow by 50%.

Distal revascularization with interval ligation is a complex and time-consuming procedure. It is mostly possible when a suitable vein can be harvested.

Endovascular approach with percutaneous transluminal angioplasty and stent placement in the subclavian artery has a very high success rate (80%–100%) with close to a 0% mortality rate. Most complications are due to distal embolization, which occurs in only 3%–6% of cases.