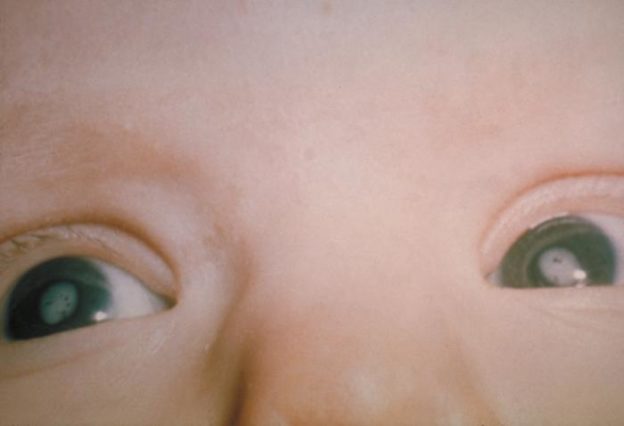 Acorea, microphthalmia, and cataract syndrome is a rare genetic disorder that is characterized by fibrous occlusion of the pupil, small eyes, and cataracts. The condition affects both eyes. Microcornea, iris and corneal dysgenesis are other common features of the syndrome. The fundus examination reveals a normal retina and optic disc. The mode of inheritance appears to be autosomal dominant.

Because of the macular and nerve abnormalities, patients might develop nystagmus and amblyopia. Patients with aniridia might have an ocular anomaly as part of a syndromic disorder known as WAGR syndrome. In WAGR syndrome, patients have Wilms tumor, genitourinary anomalies, intellectual disability, cerebellar ataxia, and aniridia.

The condition arises from a mutation in the PAX 2 gene that regulates the development of structures of the eye.  The gene is located in the AN2 region of chromosome 11.

This is a congenital malformation that is characterized by the complete absence of one or both eyes. This refers to the globe and other ocular tissues. Patients with anophthalmia also do not have ocular adnexa or ocular muscles in the affected eye orbit. They also have a small orbit, small eyelids, and malar prominence.

Most common causes of anophthalmia are:

Prenatal ultrasound is the diagnostic modality of choice to screen for and confirm the diagnosis of anophthalmia. Newborns with anophthalmia should undergo a magnetic resonance imaging study to study and visualize the orbit. Cosmetic surgery and the implantation of a prosthetic eye are the only available options for infants with anophthalmia.

This congenital anomaly is characterized by the presence of a narrow horizontal palpebral fissure.

It is inherited in an autosomal dominant pattern and arises from mutation of the FOXL2 gene.

A coloboma is a congenital hole in one of the structures of the eye. The hole might be found in the iris, retina, choroid, or optic disc. Coloboma is a condition that is always present at birth. Most cases of coloboma affect the iris. The estimated incidence of coloboma is one per 10,000 live births.

PAX2 gene mutations might be associated with coloboma. Moreover, up to 90% of children with fetal alcohol syndrome have an eye congenital anomaly, with colobomas being the most common.

Patients with CHARGE syndrome have:

Chromosome 22 abnormalities are also associated with colobomas. Treacher Collins syndrome is an autosomal dominant disorder that is characterized by the presence of colobomas. Treacher Collins syndrome is caused by TCOF1 gene mutation. Colobomas can be treated with a specialized cosmetic contact lens. Surgical repair of large iris defects is another option.

The most common causes of ectropion include:

The eyelids are responsible for the distribution of the lacrimal fluid and its collection. Ectropion interferes with this mechanism leading to the development of:

Entropion is a congenital condition that is determined by:

Patients with entropion typically present with redness and pain around the eye, light sensitivity, epiphora, and a decreased visual acuity if the cornea is damaged. Entropion is typically treated with a simple surgical procedure. The prognosis after surgical repair is excellent as long as the cornea is not damaged.

Keratoglobus is a degenerative non-inflammatory disorder of the eye that is characterized by corneal thinning and the transformation of the shape of the cornea from a normal gradual curve to a globular shape.

Keratoglobus is a surgical condition. Corneal transplantation is needed for the optimum treatment of keratoglobus.

This condition can be

The acquired form is more common among females aged between 50-70 years. There has been no racial predisposition noted.

The most common causes of nasolacrimal duct obstruction include:

Patients with nasolacrimal duct obstruction are at risk of developing a secondary bacterial infection of the lacrimal ducts known as dacryocystitis. Dacryocystitis resolves spontaneously and antibiotics are not indicated unless the patient develops bacterial conjunctivitis. The dye disappearance test can be used to confirm the diagnosis of nasolacrimal duct obstruction. The irrigation test is also useful in confirming the diagnosis.

It involves a variety of treatment modalities depending on the cause and severity as follows:

Ptosis is defined as the drooping of the upper eyelid. Ptosis is usually worse by the end of the day. Ptosis can be caused by oculomotor nerve palsy, facial nerve palsy, or Horner’s syndrome. Brain tumors, diabetes mellitus, and Pancoast tumors can also cause ptosis.

Trauma and inflammatory conditions of the upper eyelid can also cause ptosis. Myasthenia gravis can present with ptosis by the end of the day. Morphine, oxycodone, heroin, and hydrocodone can cause ptosis. Pregabalin is also associated with mild ptosis.

Ptosis can be classified into the following types:

Aponeurotic and congenital ptosis are usually treated surgically with levator muscle resection, muller muscle resection, or a frontalis sling operation. Treatment of oculopharyngeal muscular dystrophy or myasthenia gravis results in the improvement of the ptosis.