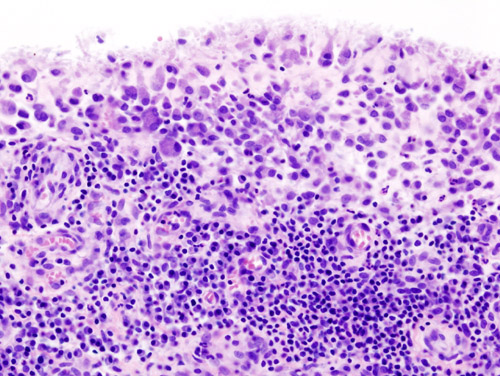 Definition of the Complement System

It is composed of plasma and membrane proteins that complement antibody-mediated immunity through activation by three pathways. The plasma proteins are synthesized in the liver and circulate in the blood for recognition, attachment, and clearance of antigen/antibody complexes.

These proteins are regulated to avoid self-harm resulting from autoimmunity against host cells. Deficiency of one of these proteins can lead to multiple disseminated infections while dysregulation can lead to autoimmune disorders.

These proteins are regulated to avoid self-harm resulting from autoimmunity against host cells. Deficiency of one of these proteins can lead to multiple disseminated infections while dysregulation can lead to autoimmune disorders.

Functions of the Complement System

C1a, C4a, and C5a are potent inflammatory mediators with antimicrobial activity. They are called anaphylatoxins because of their role in vasodilation, smooth muscle contraction, increased vascular permeability, activation of mast cells, endothelial cells and macrophages.

They also act as chemotactic factors to direct immune cells and hematopoietic stem cells to the site of inflammation.

Hematopoietic stem cells have a major role in regulating the inflammatory response, regeneration of tissues and limitation of fibrosis in the damaged tissue. Vascular endothelial growth factor receptor–1, interleukin-6 and TNF-alpha are all released by complement activation leading to angiogenesis with the formation of new blood vessels. Age-related retinal degeneration with neovascularization is an example of complement-induced angiogenesis. 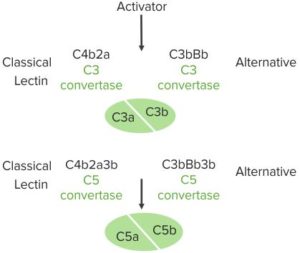 Activation of C3b will lead to lysis of bacteria by membrane attack complex MAC in addition to the release of anaphylatoxins – C1a, C4a, and C5a.

It is mainly activated by an antigen-antibody complex. C1 complex is composed of C1q, C1r, and C1s subunits. The C1q subcomponent attaches to the Fc portion of IgM and IgG subclasses 1 and 3 leading to cleavage of C1r which in turn cleaves C1s. The C1s fragment of C1 is responsible for cleaving C4 and C2. IgA, IgD, IgE and IgG subclass 2 are not known to activate complement proteins. C4b and C2a form together C4b2a, which is known as the C3 convertase.

C3 is split into C3a and C3b. C3b acts as an opsonin, as well as C4b. Yet C3b can activate C5 to induce the lytic sequence. The complement protein fragments with the lowest number attach to the target and act to activate other proteins. Most of C4b attaches to the target cells while only a few binds to C2a to form C3 convertase.

The process of opsonization is a means of identifying the invading particle to the phagocyte. Opsonization is the molecular mechanism whereby molecules, microbes, or apoptotic cells are chemically modified to have stronger interactions with – to be more “delicious” to – cell surface receptors on phagocytes and NK cells. With the antigen-coated in opsonins, binding to immune cells is greatly enhanced. Opsonization also mediates phagocytosis via signal cascades from cell surface receptors.

Opsonins aid the immune system in a number of ways. In a healthy individual, they mark dead and dying self cells for clearance by macrophages and neutrophils, activate complement proteins, and target cells for destruction through the action of natural killer (NK) cells.

Similarly, C3a and C5a act as anaphylatoxins while most of C5b and C3b attach to target cells. Activated C3b join C4b2a to form C5 convertase which is C4b2a3b. Cleavage of C5 yields C5a which is an anaphylatoxin and C5b which starts the membrane attack complex; C5b, C6, C7, C8, and C9. C7 is responsible for the disruption of the integrity of the membrane lipid bilayer and formation of transmembrane channels and pores which facilitate further osmotic lysis and destruction by the membrane attack complex proteins.

This is similar to the classical pathway except that the complement system is activated by lectins-sugar complexes where lectins are carbohydrate-binding proteins that attach to sugar residues on the surface of pathogens. Lectins bind to mannose, fructose, glucose, N-acetylglucosamine, and N-acetylmannosamine.

This binding leads to activation of MASP-1&2 with subsequent cleavage of C4 & C2 the same as the classical pathway. Lectins are known for not binding to galactose and sialic acid sugars on the mammalian cell surface for recognition of self-cells.

This is part of the host innate immunity, which is continuously active without binding to any antibodies or lectins. It uses auto-activated C3, which is always present in minute amounts, to attach to cells and pathogens. C3 can be auto-activated in the body but becomes deactivated in a normal environment in healthy individuals.

Activated C3 cleaves factor B, a protein that in humans is encoded by the CFB gene and is part of the Complement’s Alternative Pathway, into Ba and Bb. Bb, in turn, forms C3bBb, which then attaches to properdin (P) to form C3bBbP, which functions as C3 convertase to cleave more C3 into C3a and C3b. This causes the amplification of activated C3 into C3a and C3b.

Properdin is normally secreted from activated neutrophils. More C3b can bind to the C3 convertase to form C5 convertase; C3bBbC3b which in turn binds to properdin P for stabilization and forms C3bBbC3bP to follow with the MAC as in classical pathway.

Other pathways for complement activation can use Beta-amyloid, C-reactive protein (CRP), Trypsin-like proteases and kallikrein in different mechanisms to lead to MAC activation and immune reaction.

Mechanism of Action of Complement Proteins

Activation and attachment of C3b to target cells leads to opsonization, which is rapid lysis and phagocytosis of the microbial cells surrounded by a huge number of C3b. Phagocytosis is enhanced by the recognition of C3b by host cell receptors on macrophages.

This process is followed by antigen presentation to B lymphocytes responsible for antibody production and humoral immune response. Sometimes, complement activation is secondary to apoptosis of self-host cells.

Complement proteins attach to surface carbohydrate of apoptotic cells leading to their phagocytosis and clearance. Interestingly, it has been proven that the complement system can also play a role intracellularly by activating C3 in the cytoplasm or recognition of the C3-coated viruses inside the cells to initiate an immune response.

Regulation of the complement system

These disorders are mainly multiple recurrent infections and autoimmune diseases. Disorders related to the complement system can result from either factor deficiency or activation against self-cells.

The complement system can also be involved in many physiological aging processes that can lead to pathological impact e.g. age-related macular degeneration and Alzheimer’s disease. Dysregulation or activation of autoantibodies can be involved in some pathologic conditions including systemic lupus erythematosus (Type III Hypersensitivity) and paroxysmal nocturnal hemoglobinuria (Type II Hypersensitivity).

Paroxysmal nocturnal hemoglobinuria results from complement activation against blood cells due to genetically absent surface proteins related to glycosyl-phosphatidylinositol in the hematopoietic stem cells. The disease is characterized by hemolysis, thrombosis and bleeding tendency. Treatment is based on the administration of eculizumab – a monoclonal antibody against C5 to prevent complement-mediated hemolysis and bleeding.

C3 deficiency is associated with the total malfunction of the complement system due to the essential role that C3 plays in complement activation. It is transmitted as an autosomal recessive trait. Generalized infections and sepsis can occur similar to Bruton agammaglobulinemia with staphylococci, pneumococci or Hemophilus influenza. It can also be associated with diseases like SLE and glomerulonephritis.

C2 deficiency is the most common genetic complement deficiency that is autosomal recessive and leads to infection with pyogenic encapsulated bacteria – Streptococcus pneumoniae, Haemophilus influenza, and Neisseria meningitidis and sometimes fatal septicemia.

C1 esterase inhibitor deficiency causes hereditary angioedema with attacks of nonpitting, nonpruritic, localized edema in the larynx, GI, lips and other sites with varying manifestations. It can be induced by emotional stress, trauma or exercise.

Diagnosis is suggested by positive family history, edema with a lack of accompanying pruritus or urticaria, and decreased C4 levels and C1-INH levels. Treatment options include danazol, Kallikrein inhibitor, and C1 inhibitor.

Membrane attack complex deficiency is an autosomal recessive trait that leads to Neisseria meningitides meningitis and even septicemia.

Properdin deficiency is an X-linked trait with all patients are males. Death usually occurs from meningococcal meningitis.

Total hemolytic complement or CH50 assay is used as a screening tool for complement activity and function. The ability to lyse antibody-coated sheep RBCs in a diluted serum is the main idea for complement function assessment. Intact classical pathway proteins are required for RBCs lysis in the presence of antibodies. Selective complement assays can be used next for specific factor deficiency.

Inflammation is the body’s response to injury. Injury can be physical, chemical or pathogenic. The body reacts to injurious stimuli by vasodilation to increase the blood flow to the site of inflammation, exudation of plasma by increasing capillary permeability and cellular migration derived by chemotactic factors and inflammatory mediators.

Upon prolonged exposure to the offending agent, inflammatory mediators range from vasodilators and eicosanoids to interferon-gamma (INF-γ) and tumor necrosis factor (TNF) and reactive oxygen species. Chronic inflammatory cells are more evident with a failure of resolution of irritating factors.

Cells of immediate response – neutrophils, basophils, and eosinophils – are replaced by macrophages, lymphocytes, monocytes, and fibroblasts. This is why chronic inflammation is characterized by more tissue destruction and more fibrosis.

Granulomatous inflammation is an example of chronic inflammation that can be caused by TB and sarcoidosis. The granuloma is composed of central necrosis, Langhans cells, epithelioid macrophages, and peripheral lymphocytes.

The fate of chronic inflammation usually depends on the etiology. Resolution with permanent changes can occur when the causative factor no longer exists. Recurrent attacks are common with autoimmune disorders, persistent infection and compromised immunity.

Overview and clinical aassessment of the complement system via uptodate.com

Complement and its role in innate and adaptive immune responses: Nature magazine