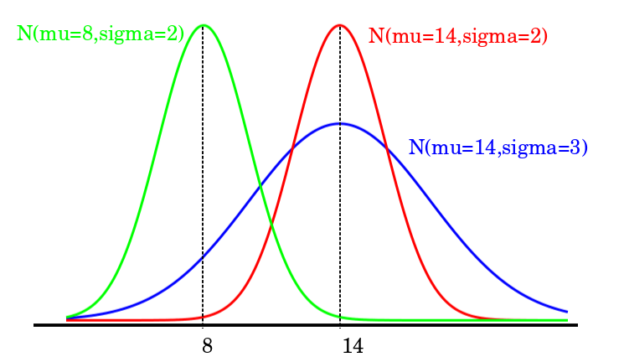 The big picture of distributions comprises:

Example: The datasets can be compared by using histograms so suppose the three top-selling smartphones popular on the market are LG G5, Samsung S7, and iPhone 7 plus. The specifications of the three phones are as follows:

Table: Specifications of Samsung S7, iPhone 7 plus, and LG G5

Table: Response from Males and Females

The data taken from two sets can be compared by using a histogram.

The comparison of two datasets has shown that, on average, females spend 3.6 to 3.9 hours per day on social media networking. On the other hand, males spend 2.7 hours per day for interacting with their social networks using their smartphones.

In order to compare two groups using box plots, a side by side comparison is required. Box plots give a sense that how the shapes of box plots differ in terms of skewness and symmetry. One of the troubles in using box plots for a comparison of different groups is that it hides modes.

With parallel box plots, data from two groups are displayed on the same chart, using the same measurement scale. Let’s compare a medical study where a treatment group was supplied medicine for a cure for cold symptoms. The box plots will show the number of days each medical group has to report symptoms to seniors.

In the control group, the same lasted 3 to 17 days, giving it a range = 14. The median recovery time of the treatment group has shown 5 days, whereas 9 days for the control group indicating a positive effect on patient recovery.”

Box plot comparison is helpful in the determination of spread and center. In terms of shape, it is not reliable.

Distributions can be compared by using box plots through side by side comparison.

Side by side comparison

Box plots are good at portraying extreme values and are especially good at showing differences between distributions. However, many of the details of a distribution are not revealed in a box plot, and to examine these details one should create a histogram and/or a stem and leaf display.

Outlier can be classified into three main types:

Point outlier: If an individual data point can be considered anomalous with respect to the rest of the data, then the datum is termed as a point outlier. This is the simplest type of outlier, and it is the focus of the majority of research on outlier detection.

Contextual outlier: If an individual data instance is anomalous in a specific context (but not otherwise), then it is termed as a contextual (conditional) outlier. The notion of a context is induced by the structure of the data set, and has to be specified as a part of the problem formulation.

Impact of outlier on data description

An outlier ranges far from mid of the data point or mean position. It is normally located on extreme positions, i.e. higher or much lower point. Outliers located at a much higher position than mid-point of the data cause inflation of mean and reduction in mean when located at a much lower position to the mean point. Outlier included in a calculation based on the reasonable expectation of finding outlier in a population.

Outliers are required to be investigated considerately in order to get accurate results from a data set. Outliers are valuable information during the process of the data gathering and reading process in a biological research process. Outliers are bad points which can contaminate a data set; they should be eliminated from the data.

Data transformation is the process of making distributions more systematic and putting on a different scale in the form of a different unit as compared to the previous one. If data is skewed, it may be difficult for the researcher to summarize distributions through the use of center and spread. It can also create problems for finding out whether the outliers are the extreme values identified in the chart or graph, or if it is just a part of a stretched tail.

It aims at making the distribution of a variable more symmetric and more linear. It helps in achieving normality of a data set.

The log transformation can be used to make highly skewed distributions less skewed. This can be valuable both for making patterns in the data more interpretable and for helping to meet the assumptions of inferential statistics.

The anti-log of this arithmetic mean of 1 is

Which is the geometric mean:

Therefore, if the arithmetic means of two sets of log-transformed data are equal, then the geometric means are equal.

A histogram can be used to assess the linearity of data. It aims at creating uniformity in the spread of several groups, despite the difference between their centers.

Side by side box plots can be used for this assessment. Data transformation aims at making the form of scatterplot more linear and to avoid thickening around the line in a plot by spreading the scatterplot evenly.

In some cases, the transformation of data through the ladder of powers does not aid properly in fixing the curvature of a scatterplot. Logarithmic transformations are helping to sort such issues.

Equalizing the spread between two groups

The comparison of the two groups is normally based on an assumption that the variance of one group is equal to the variance of the other group. Logarithmic transformation is helpful in equalizing the spread between two groups of data sets.

Issues with Comparison of Distribution

Some of the major issues associated with distribution comparisons include:

1. Use of inconsistent scales

The plot should be labeled clearly and accurately. If labeling is not done properly, it may create ambiguity.

Outliers should be identified and removed timely in order to avoid any kind of variance in data. If outliers are not removed, summarize the data twice with and without outliers.

What effect does the outlier have on the mean? via reference.com

How to Compare Data Sets. via stattrek.com

The Effects of Outliers. via statisticslectures.com