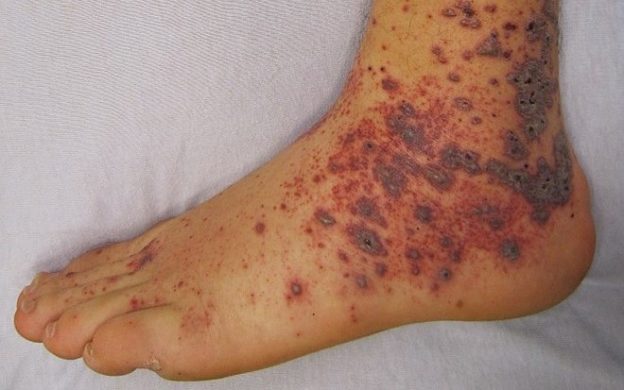 Bleeding disorders can be classified into the following categories.

Disorders of the vessel wall

This is a rare autoerythrocyte sensitization disorder that affects mainly women. Patients develop local pain followed by unexplained painful ecchymoses on the extremities. Although there may be a history of trauma, the ecchymoses typically occur distant from the site of trauma. Ecchymoses never occur on the back of the patient.

This syndrome is seen in women with psychiatric disease. The diagnosis is a clinical one and psychiatric treatment usually solves the problem. The pathogenesis and mechanism of the disorder are not known.

Conditions characterized by abnormal protein content in the blood and immune or protein deposition in the blood vessel wall include:

The blood vessels can become fragile and start leaking blood. Patients present with purpura and the lesions are typically small in size (< 2 mm). Large lesions such as ecchymoses or bruises may be also seen in these patients.

The diagnosis is based on 3 main steps:

The treatment of hereditary hemorrhagic telangiectasia can be summarized as follows:

Bleeding disorders due to functional platelet abnormalities can be hereditary or acquired. The disorders of platelet function can be further classified into:

For a platelet to be considered as normal functionally, it has to adhere to other platelets, secrete certain proteins for the activation of the clotting cascade and recruitment of more platelets and other cells, aggregate to other platelets, and have procoagulant activity. Moreover, the number of platelets available in the bloodstream needs to be appropriate for bleeding to not occur.

Acquired platelet functional abnormalities are caused by aspirin, antiplatelet therapy, or the use of nonsteroidal anti-inflammatory drugs. 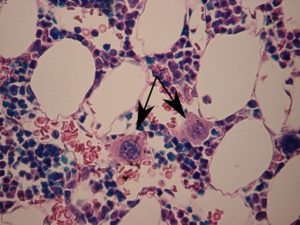 Image : “Two megakaryocytes are visible in this slide of bone marrow” by Wbensmith. License: CC BY-SA 3.0

Bernard-Soulier syndrome is a rare disorder of platelet adhesion that is characterized by a deficiency of glycoprotein Ib/IX. This protein is found on the surface of the platelet and is responsible for platelets sticking and clumping to each other. Children with this disorder present with bruises, frequent nosebleeds, and bleeding from the mouth and gums. Coagulation profile is normal; however, bleeding time is prolonged. The number of platelets may be low. On a blood smear, the platelets appear to be enlarged and do not clump to each other in response to ristocetin.

Patients with a platelet secretion abnormality have:

Glanzmann thrombasthenia arises from abnormal glycoprotein IIb and IIIa, which are required for proper platelet adhesion. The platelets only adhere to ristocetin. The disease can be classified into a severe form, in which no glycoproteins can be detected, or a mild form, with reduced levels of glycoproteins in circulation.

The rare disorder Glanzmann thrombasthenia presents with impaired platelet aggregation. Patients with this disorder may present with life-threatening bleeding. Platelets fail to plug to the site of an injury. There is a deficiency in the glycoprotein IIb/IIIa.

Some rare hereditary disorders affect platelets’ function and number. These include:

The main cause of bleeding in these disorders is related to thrombocytopenia, not platelet dysfunction.

Immune thrombocytopenic purpura (ITP) is a heterogeneous disease that is characterized by increased platelet clearance and insufficient platelet production. Tissue macrophages are responsible for platelet destruction in ITP. The process of destruction occurs in the spleen.

The destruction of platelets in ITP appears to be facilitated by the presence of IgG immunoglobulins; hence the term “immune.” Infection with hepatitis C, human immunodeficiency virus, or Helicobacter pylori can contribute to the production of these antibodies. The management of ITP revolves around corticosteroids, mainly prednisolone. After the cessation of prednisolone, some patients with ITP may develop cytopenias.

Patients with ITP who do not respond to prednisolone should receive 1 of the following treatments as second-line therapy:

Romiplostim and eltrombopag are thrombopoietin receptor agonists. They stimulate the production of platelets from the bone marrow and are both licensed for the treatment of ITP. If all of the above treatment options fail to treat the thrombocytopenia, splenectomy might be considered.

The following table summarizes the most common TMA syndromes, their characteristics, and management: