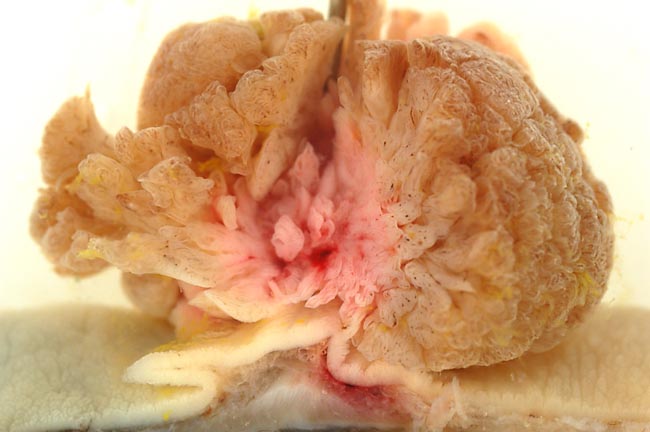 Cancer that arises from the colon (large intestine) or rectum.

Colorectal cancer is the third most common cancer in the United States and one of the leading causes of cancer-related deaths in the world. Prominent risk factors include age, family history, smoking and high fat, low fiber diet.

The pathophysiology underlying the disease is complex and includes disturbances in the APC/β-Catenin pathway and in the microsatellite instability pathway, eventually leading to loss of function of DNA mismatch repair genes. Particular colonic polyps such as villous adenomatous polyps can be an ominous sign for the development of the disease and require removal.

Inherited forms of colorectal cancer include familial polyposis syndrome, which involves a mutation in the APC gene leading to the widespread development of adenomatous polyps in the GI tract, and hereditary non-polyposis colorectal cancer (HNPCC), caused by mutations in DNA mismatch repair genes.

Most patients present at an advanced stage and presenting symptoms include abdominal pain, changes in bowel habits, blood in stools, anemia and weight loss. Colonoscopy is nowadays a routine screening procedure and surgery with or without adjuvant therapy is indispensable to establish a cure, particularly in metastatic disease. Imaging through CT and increasingly with PET scanning is the cornerstone of staging. The prognosis has improved with an overall 5-year survival rate of 65%.

Worldwide, the highest rates are present in Australia and New Zealand and are the lowest in West Africa. In the United States, African Americans tend to be the most affected and Hispanics have the lowest incidence. Colorectal cancer is equally prevalent in men and women.

Up to 25% of patients have a prior family history, defined as the presence of the disease in multiple first-degree relatives, or in at least one first degree relative diagnosed before the age of 60. In addition, smoking and a low fiber, high-fat diet are other important environmental risk factors, whereas high yogurt intake was found to be correlated with a decreased risk.

Other factors that are associated with a decreased risk are folate and calcium intake, as well as estrogen replacement therapy. Regarding alcohol, studies have found an increased association only in individuals who consume more than 30 grams per day and who already have a family history for the disease.

Pathology and Pathophysiology of Colon Cancer 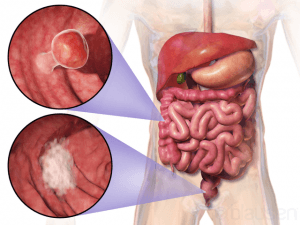 The molecular pathogenesis of colorectal cancer is complex and involves two major pathways.

Colonic polyps are masses that protrude into the lumen of the GI tract and that can be precancerous. They are present most commonly in the rectosigmoid junction, although they can be found anywhere in the bowel. 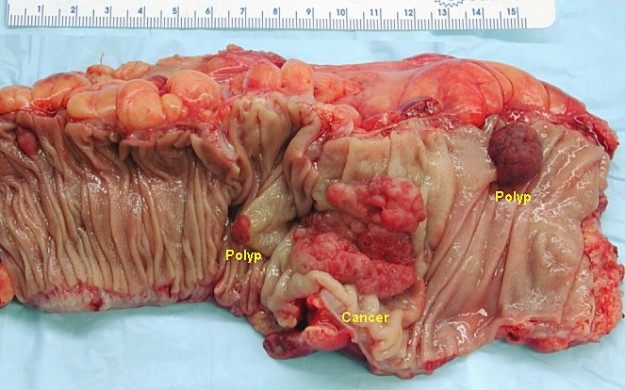 There are several types of colonic polyps and they include adenomatous polyps, hyperplastic polyps, juvenile polyps, and hamartomatous polyps. 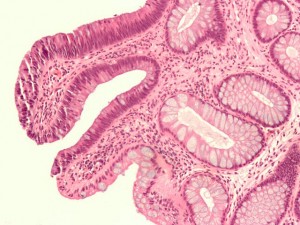 Image: “Tubular adenomas: Dysplasia is seen on the left of the image” by Nephron. License: CC BY-SA 3.0

Adenomatous polyps are precancerous and their risk for malignant transformation is associated with an increase in size, number and histological type. They comprise 10% of all polyps and can be classified according to their histology into three types: villous, tubular and tubulovillous.

Villous adenomas have a higher malignant potential than tubular adenomas and are characterized by long, finger-like villi. They tend to be larger, non-pedunculated and have a cauliflower-like appearance. Unlike other types of adenomatous polyps, villous polyps cause hypersecretory syndromes that manifest with hypokalemia and mucous discharge. 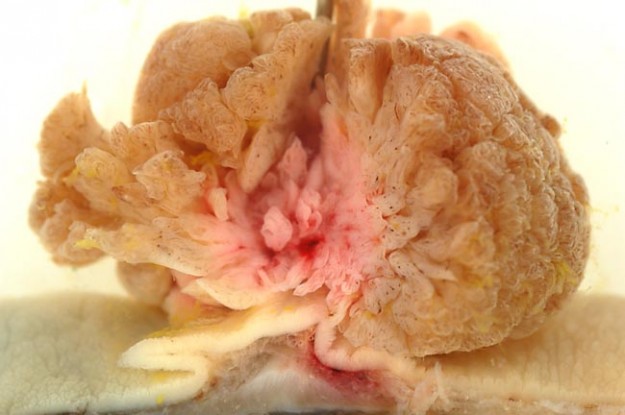 Tubular adenomas, on the other hand, have smaller and more rounded villi. The gross structure of the adenomatous polyp is also important and can be classified into pedunculated and sessile.

Pedunculated polyps possess a stalk and tend to be less worrisome than sessile polyps.

Sessile polyps are more concerning because the risk of invasion into the submucosa is larger and because they are more challenging to remove. 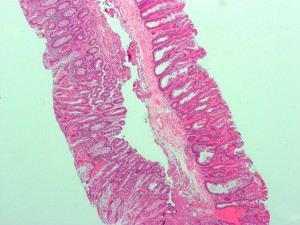 Image: “Micrograph of a sessile serrated adenoma (SSA) from the right colon removed during a colonoscopy” by Nephron. License: CC BY-SA 3.0 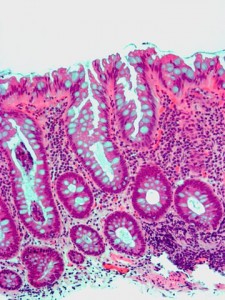 Juvenile polyps can be detected in children below the age of five. They do not exhibit an increase in the number of epithelial cells but rather consist of dilated cystic glands and mildly inflamed lamina propria. They are present most commonly in the rectum (80%) and have no increased risk of malignancy if not more than one juvenile polyp is found. 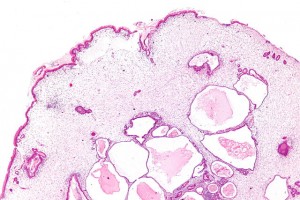 There are multiple polyposis syndromes that are disease categories in their own right and that can be associated with other systemic manifestations. The most important are the following:

It is one of the most serious polyposis syndromes.

It is a genetic disease with an autosomal dominant inheritance. The characteristic mutation is within the APC gene on chromosome 5q. 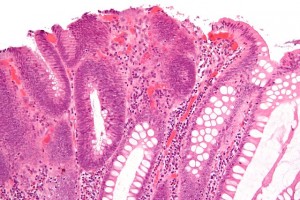 Image: “Micrograph of a tubular adenoma, the colorectal cancer precursor most commonly associated with FAP” by Nephron. License: CC BY-SA 3.0

The disease has variable penetrance that can be explained by the two-hit hypothesis. This hypothesis states that a second sporadic mutation is necessary for the development of the disease. Familial adenomatous polyposis manifests with hundreds of adenomatous polyps that are always present in the colon and, in 90% of the cases, in the duodenum.

Some cases may also involve the stomach, jejunum, and ileum. The risk of colorectal cancer is 100% by the third and fourth decades of life and doctors recommend prophylactic colectomy.

It is a multisystemic disease that, in addition to polyps, presents with congenital hypertrophy of retinal pigment epithelium, osteomas, desmoid tumors, sebaceous cysts, benign soft tissue tumors, and dental abnormalities. The risk of colorectal cancer is also 100%.

It is inherited in an autosomal recessive fashion. In addition to polyps, it presents with cerebellar medulloblastoma or glioblastoma multiforme.

It is characterized by hamartomas that have a low malignant potential. They can be found across the entire GI tract: in the small bowel, colon or stomach. 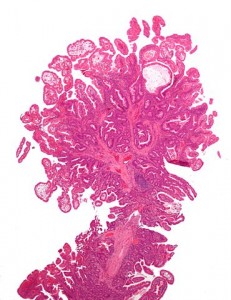 It also presents with pigmented spots around the oral mucosa, lips, genitalia, face, and palms. Although the hamartomas themselves have low malignant potential, there is a slightly increased risk of a multitude of cancers that include cancer of the stomach, ovary, breast, cervix, testicles, and lung. Other potential complications of the presence of hamartomas in Peutz-Jeghers are intussusception and GI bleeding.

Unlike familial adenomatous polyposis, it only has a small risk for colorectal cancer. It presents in childhood and manifests with tens and up to hundreds of juvenile colon polyps.

Characterized by the absence of polyps, but the presence of an increased risk of colorectal cancer, up to 40%. The mutation affects the DNA mismatch repair genes such as hMLH1, hMSH2, hMSH6, hPMS1, and hPMS2. It is classified into two types: Lynch I and Lynch II.

Colorectal cancer can result in metastasis in several ways. Through direct extension, it can invade the bowel wall and then can spread to other retroperitoneal organs. It can reach the liver through the portal circulation as well as the lungs through vertebral and lumbar veins. The liver is the most common site of metastasis. It can also spread regionally through the lymphatic circulation. About 20% of patients have metastatic disease at presentation.

Patients who usually present with symptoms are most likely to have advanced disease. Symptoms include melena, hematochezia, abdominal pain, change in bowel habits or iron deficiency anemia that cannot be explained and that is most suspicious in post-menopausal females, as well as males older than 50. In rare instances, the disease can also present as a Streptococcus bovis bacteremia.

Symptoms can be classified based on whether they are specific to a certain location of the bowel, or if they are common to all locations.

Abdominal pain, weight loss, and blood in the stool can be the presenting symptoms regardless of the location of cancer. Abdominal pain is usually due to either obstruction of the bowel or peritoneal spread.

Colorectal cancer is the most common cause of large bowel obstruction in the adult population. Peritonitis is the most life-threatening complication and can result from a bowel perforation.

Tumors that occur in the right colon, commonly do not present with obstruction due to the larger size of the right colon, so that the tumor can grow and remain undetected. Furthermore, a change in bowel habits is also very rare. More common findings include melena and iron deficiency anemia. The triad of anemia, weakness and an occasional right lower quadrant mass is characteristic of right colon cancer.

Left-sided tumors, on the other hand, present with obstruction more commonly than right-sided tumors because of the smaller diameter of the colon. Hematochezia is also more frequently occurring than melena. Furthermore, changes in bowel habits through alternating diarrhea/constipation is also more common with left-sided tumors and are accompanied by a narrowing of stools, termed ‘pencil stools’.

Finally, rectal cancer, which comprises up to 30% of all cases of colorectal cancer, commonly presents with hematochezia, tenesmus, and a rectal mass accompanied by a sensation of incomplete evacuation.

The differential diagnosis of colorectal cancer depends on the presenting signs and symptoms, but generally includes arteriovenous malformations, inflammatory bowel diseases such as Crohn disease and ulcerative colitis, ischemic bowel disease, small-intestine carcinomas, as well as other rare cancers of the GI tract such as carcinoid tumors, neuroendocrine tumors, and gastrointestinal lymphoma.

Colonoscopy is the best screening procedure for colorectal cancer. It is the most sensitive and most specific screening test. It can be used for both diagnostic and treatment purposes through polypectomy and excision of a sample for biopsy.

Digital rectal examinations are not very sensitive and only 10% of cases present with tumors that can be detected with DREs.

Carcinoembryonic antigen (CEA) is not useful for screening, but it is measured at baseline and used to determine prognosis and monitor for recurrence.

Barium enema X-ray can also aid in diagnosis and shows a characteristic finding of the ‘apple core’ lesion.

Once colon cancer is diagnosed, computerized tomography (CT) of the chest, abdomen, and pelvis is used for clinical staging.

Positron emission tomography (PET) has recently grown in importance in the staging and diagnostic workup of colorectal cancer and is more frequently used in association with CT scanning to increase resolution and detect metastatic deposits.

On the other hand, important physical exam findings are also included in the staging procedure such as ascites, hepatomegaly, and lymphadenopathy.

Surgery is the only curative treatment of colorectal cancer.

The use of adjuvant therapy, through chemotherapy and radiation therapy, depends on the stage of the tumor.

Usually, radiation therapy is not indicated in colon cancer but is more frequently used in rectal cancer. Carcinoembryonic antigen (CEA) levels should be obtained prior to performing surgery to establish a baseline level and assess prognosis.

Follow-up is very important after surgery and usually includes the following testing modalities: Stool guaiac test, a CT scan of abdomen and pelvis, an X-ray of the chest, a colonoscopy and periodic monitoring of CEA levels. Roughly, 90% of recurrences occur within a time period of three years after surgery.

A five-year survival rate of colorectal cancer in the United States is 65% but varies considerably depending on the stage of the disease.

The survival rate is also lower for black patients relative to white patients even when they undergo similar resection procedures at stage II and stage III of the disease. Studies have also shown that body mass index, prior to diagnosis, is an important predictor of survival, whereas BMI after diagnosis is not.

Aspirin intake has been shown to decrease the risk of colorectal cancer-related deaths, although more studies are needed to determine the optimal dosage and duration of the treatment.

On the other hand, smoking is associated with an increased risk of mortality after diagnosis. Finally, patients previously diagnosed with mental disorders tend to have worse outcomes than those who are not.