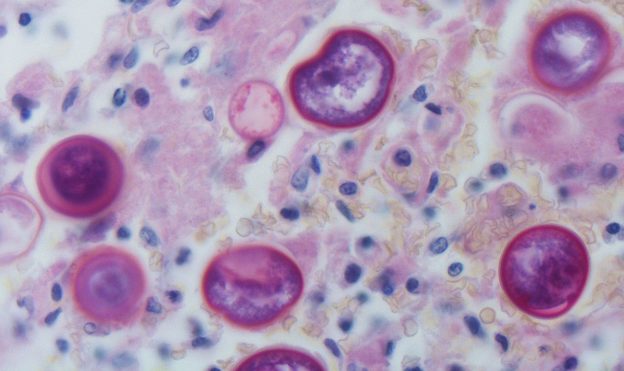 Coccidiomycosis is endemic in areas where the hot summer or mild winter prevails with an annual rainfall of 10 – 50 cm. The causative organism is found in alkaline soil, about 10 – 30cm below the surface. It remains dormant during dry spells and develops into a mold with long filaments during the rainy season.

These filaments break off into tiny pieces leading to spore formation. The spores are swept away during construction, farming and natural disasters, such as earthquakes and windstorms.

Coccidiomycosis is endemic in the Southwestern United States, northern Mexico, parts of Central and South America.

The population working in an agriculture setup or at construction sites is at higher risk of developing the disease. Pregnant females, especially those in their last trimester, are more prone to get the disseminated infection. Similarly, tourists traveling to the endemic areas may also contract the disease.

Immunocompromised patients, such as those on immunosuppressants, steroids or have HIV, are always at risk of getting the infection. Diabetics and individuals who underwent thymectomy are also included in the high-risk group. 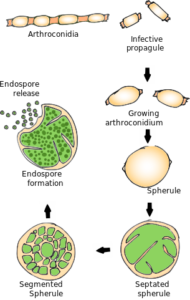 The life cycle of the Coccidioides begins with dormant barrel-shaped cells known as arthroconidia measuring 8 – 30μm. These are the degenerative form of hyphae during prolonged dry spells. These arthroconidia form spores which are lightweight structures, swept away during farming, construction or during natural calamities.

These spores are inhaled, thus land in the alveoli. Inside the alveoli, they develop into spherules, which are doubled walled structures measuring 20 – 200μm. Within the next 48 – 72 hours, these spherules result in the formation of septa and endospores.

When these spherules rupture, the endospores are released, which infect other body tissues causing dissemination of the disease. The endospores again mature into spherules and the parasitic life cycle is completed.

In certain cases, nodules are formed around the spherules which, when burst into alveoli, cause characteristic chest pain, cough, and hemoptysis. Immuno-compromised people are more prone to get blood spread infection. 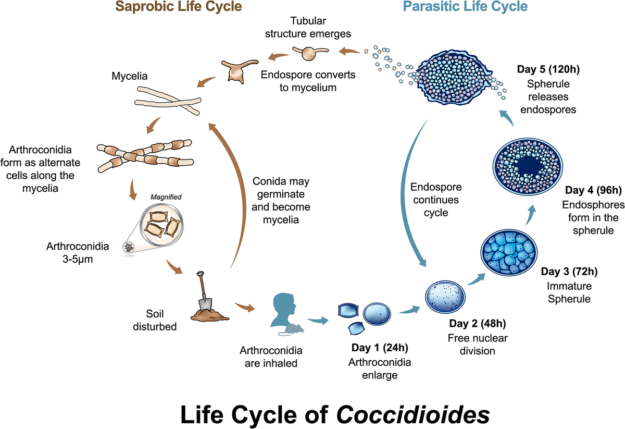 Image: “Both Coccidioides species share the same asexual life cycle, switching between saprobic (on the left) and parasitic (on the right) life stages. The saprobic cycle is found in the environment and produces the infectious arthroconidia. The conidia may be inhaled by a susceptible host, or may return to the environment to continue the saprobic life cycle. The parasitic life cycle is initiated when arthroconidia enlarge and transform into immature spherules, either in vivo or under specific in vitro conditions. From 24 to 72 hours, spherules undergo free nuclear division and begin developing endospores. From 72 to 120 hours, the mature spherules rupture to release endospores. Each endospore can initiate a new spherule, or, under particular atmospheric conditions, nutrient changes, and/or lower temperature, the endospore can convert to a mycelium and initiate the saprobic phase. This occurs in rare circumstances in the living host, but is found most commonly in the environment.” by Lewis ERG, et al. – http://journals.plos.org/plospathogens/article?id=10.1371/journal.ppat.1004762. License: CC BY 4.0

The innate immune cells are particularly involved in the defense against the organism. This activates the T lymphocytes. The inflammatory cytokines, specifically the gamma interferon, are released causing the destruction of the organism.

Any impairment in the cell-mediated immunity results in incomplete evacuation of the organism from the body. The phagocytized arthroconidia, if drained into lymph vessels, may cause lymphangitis.

In addition to the activation of cell-mediated immunity, these organisms also activate the complement pathway, which promotes the chemotaxis of the eosinophils and the neutrophils. The pathogenicity of the organism is particularly related to its ability to bypass phagocytosis.

The non-respiratory transmission involves direct invasion into the skin causing local lymph nodes infection. This is, however, a self-limiting condition, which resolves spontaneously.

Signs and Symptoms of Coccidiomycosis 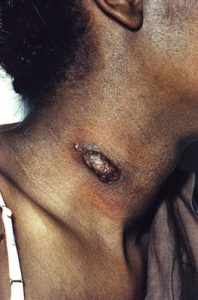 Image: “The right side of this patient’s neck displayed a chronic lesion that had been determined to be due to a Coccidioides sp. fungal infection.” by CDC/ Dr. Lucille K. Georg – This media comes from the Centers for Disease Control and Prevention’s Public Health Image Library (PHIL), with identification number #15740. License: Public Domain

The incubation period of Coccidioides is 10 – 16 days. While more than half of the infected people remain asymptomatic, others develop signs and symptoms. The primary infection most of the time starts with respiratory symptoms of a cough and breathlessness. The organism causes bronchitis and pneumonia which resolves in a few weeks.

In endemic areas, however, Coccidioides result in community-acquired pneumonia in 20% of the individuals. Other notable symptoms include lethargy muscle and joint ache, fever, rash, and headaches. The classic triad of the disease comprise of fever, erythema nodosum and joint pain also termed as ‘desert rheumatism’.

Typical features of chronic disease include a cough, fever, night sweats, weight loss, osteomyelitis, and meningitis. The disseminated form of the disease is more severe resulting in multiple skin lesions, inflammation of the vital organs, leading to death. The figure shows the skin lesion in disseminated infection.

Coccidiomycosis is diagnosed with the help of clinical history and investigations. It is important to differentiate coccidiomycosis from bacterial infections such as bacterial pneumonia or bacterial meningitis.

The initial investigations which can be performed include culture and staining of body fluids and exudates with Papanicolaou or Grocott’s methenamine silver stains which demonstrate the presence of spherules.

CSF findings help in the diagnosis of meningitis. Similarly, a chest x-ray may point towards the underlying lung disease. The gold standard is DNA detection of coccidioides through polymerase chain reaction (PCR).

The treatment plan of coccidiomycosis involves azoles as the first line of therapy. However, due to its teratogenicity, it is not recommended in pregnancy or to lactating females. Amphotericin B is reserved for severe worsening cases which involve the vital organs.

Follow-up visits on a regular basis are required. These are to monitor the adverse effects of antifungal treatment and the response to therapy after every 1 – 3 months, to be continued for a period of 1 – 2 years, or until the resolution of the disease.