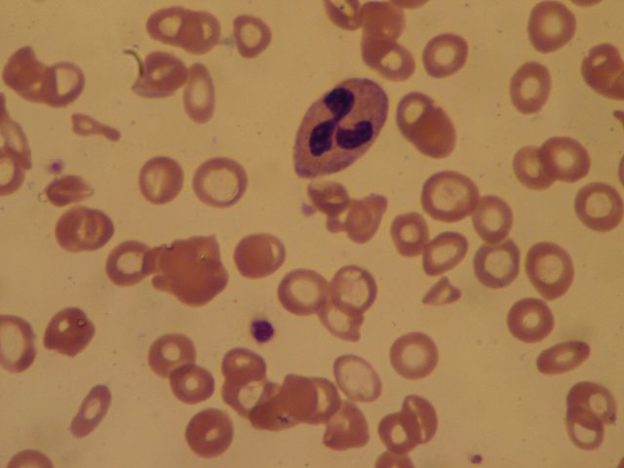 Anemia is defined as a decrease in the oxygen-carrying capacity of the blood due to decreased hemoglobin concentration or decreased number of red blood cells.

Etiology and Classification of Anemia

The broad categories of anemia include:

Anemia due to excessive blood loss

Excessive blood loss leads to anemia through several mechanisms. It is well-known that acute severe bleeding results in anemia but it is easy to overlook the chronic blood loss as a cause of anemia because they are difficult to identify.
The common culprits for chronic blood loss include bleeding ulcers, hemorrhoids, colon cancer, parasitic infections, menstruation, pregnancy, or chronic use of nonsteroidal anti-inflammatory drugs (NSAIDs), among others.

Red blood cells require iron, multiple vitamins, and hormones for their optimum production from their stem cells.
Multiple conditions can inhibit the body’s ability to produce enough red blood cells. For instance, poor eating habits (deficiency of iron, folic acid, Vitamin B12), inconsistent hormone quantities (erythropoietin), chronic illnesses, and pregnancy. An acquired or inherited a condition that can inhibit the production of optimal values of red blood cells is Aplastic anemia. Patients with chronic kidney disease have anemia due to decreased production of erythropoietin.

Several chronic medical disorders lead to anemia. For instance, cancer, rheumatoid arthritis, chronic kidney disease, and tuberculosis. In fact, sometimes anemia can be a pointer to these disorders.

Hemolytic anemia results from the self-destruction of the red blood cells owing to pressure from the circulatory system.

The clinical features depend on the type of anemia, its etiology, severity, and background health problems (co-morbidities).

The general symptoms may include:

Physical examination is paramount to ascertain if the individual is presenting with any symptoms of anemia along with any complications. Since anemia may be the initial symptom of a debilitating condition, evaluating the cause is imperative. This may not be easy to do when the patient is elderly, malnourished, suffering from a chronic disease or whose anemia is a result of several illnesses. It is essential for the physician to carry out an in-depth medical, personal and dietary history. This should include:

While there are several means of diagnosing anemia, the most readily available diagnostic test is a Complete Blood Count (CBC). A complete blood count (CBC) is a cocktail of tests that are meant to provide information about the size, quantity, and shape of red blood cells. It also informs us about hemoglobin, hematocrit, and mean corpuscular volume.

Apart from red blood cells, a CBC also provides information on the volume of white blood cells and platelets.

The MCV and the RDW give important clues about the type of anemia.

Hemoglobin is the iron-containing oxygen-carrying constituent of blood. The normal value of hemoglobin depends on the age and gender of the child.

Anemia is diagnosed when the amount of hemoglobin falls below 12 g/dL for non-pregnant women and 13 g/dL for men. To determine the severity of anemia, the concentration of hemoglobin is categorized as follows:

Hematocrit is the proportion of red blood cells in the blood. A child with a normal blood count and a high plasma volume may still be anemic because of the high volume of blood cells that have been diluted. The normal hematocrit value depends on the child’s age and gender. The range of hematocrit that is used to determine the severity of anemia is:

Iron deficiency is the most common cause of anemia. The iron studies are needed to confirm the diagnosis in patients with microcytic anemia.

Hemoglobin electrophoresis is required to diagnose the anemia caused by qualitative problems in the production of hemoglobin chains, for instance, thalassemia and sickle cell disease.

The Coombs test is used as part of the diagnosis of anemia. A Coombs test will also reveal if the body’s antibodies are attacking its own red blood cells, as this can result in hemolytic anemia.

It is also used to check for any issues during blood transfusions as well as screen expectant mothers for the risk of their fetus developing hemolytic disease of the newborn.

The management of anemia is determined by the etiology, type, and severity of the anemia.

Before starting a specific therapy for the correction of anemia, the exact cause of anemia should be confirmed. For instance, corticosteroids are more effective in the treatment of autoimmune hemolytic anemia than other medications. Iron is replaced in cases of iron deficiency anemia and the successful treatment of chronic illnesses correct the underlying anemia.
The medical management of different types of hereditary disorders also varies greatly. For example, while splenectomy is effective in managing hereditary spherocytosis and hereditary elliptocytosis, it is not advantageous in treating other hereditary hemolytic disorders.
For patients with anemia resulting from leukemia, lymphoma, Hodgkin lymphoma, multiple myeloma, myelofibrosis and aplastic diseases, bone marrow, and stem cell transplantation have been used effectively and with excellent outcomes.

Prognosis of anemia is good in most cases. However, complications may arise in some cases due to multiple organ dysfunctions. Possible complications might include: