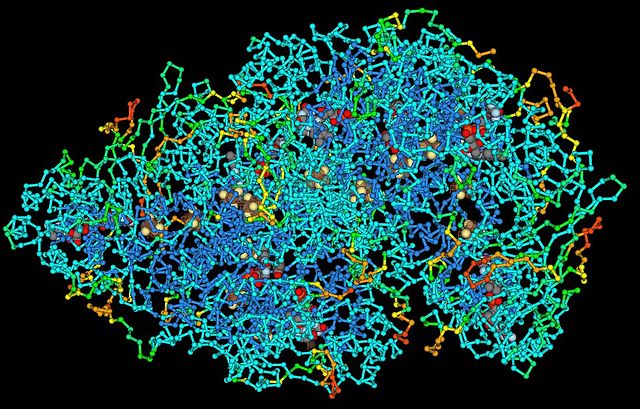 Chemical structure of a polypeptide macromolecule 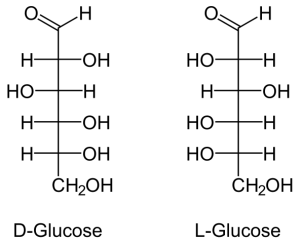 Carbohydrates are the most abundant biological molecules on the planet. In comparison to nucleotides or amino acids, they are chemically simpler, containing just three elements: carbon, hydrogen, and oxygen. The monomers and basic units of carbohydrates are called monosaccharides, which can be linked together in nearly limitless ways to form polysaccharides. Glucose is an example of a monomer, which can be linked by glycosidic linkages to form disaccharides such as lactose or sucrose or to form polysaccharides such as cellulose.

The glycosidic linkage that forms in the disaccharide lactose, or milk sugar, is a β (1 → 4) linkage between the carbons in position one on the β anomer of galactose to the oxygen atom in position 4 of glucose. Because the glucose residue in lactose has a free anomeric carbon of glucose, it is said to be a reducing sugar.

Plants produce the disaccharide sucrose, which is commonly referred to as table sugar. Sucrose is not a reducing sugar because the anomeric carbons on each sugar participate in the glycosidic bond (carbon 1 of glucose and carbon 2 of fructose). 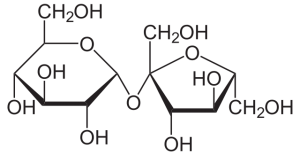 Cellulose, the primary structural component of plant cell walls, is a linear polymer of up to 15,000 D-glucose residues linked by β (1 → 4) glycosidic linkages. Humans do not possess an enzyme capable of hydrolyzing the β (1 → 4) linkages of cellulose, so we cannot use cellulose as a food source. Starch and glycogen are storage polysaccharides that humans possess the proper enzymes to hydrolyze because these biopolymers consist of α (1 → 4) glycosidic linkage between glucose monomers. 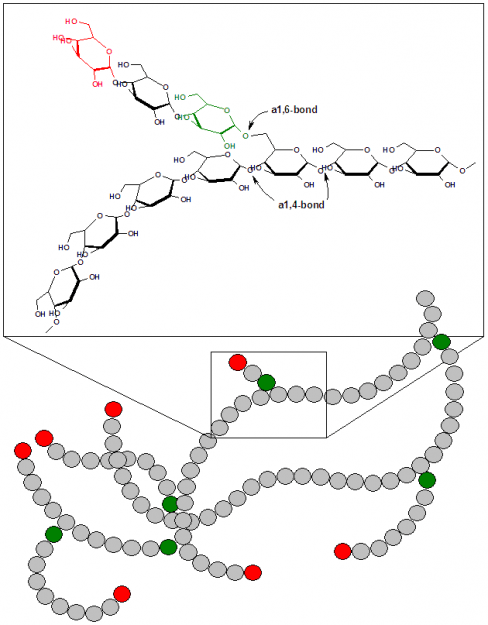 Glycogen is found predominantly in the skeletal muscle and liver, occurring in granules in the cytoplasm. It resembles the structure of starch, but it more highly branched, with branch points occurring every 8 to 14 glucose residues. Glycogen phosphorylase is an enzyme that cleaves glycogen’s α (1 → 4) bonds to release glucose for metabolic use. It is glycogen’s highly branched structure that allows for the rapid mobilization of glucose in times of metabolic need. The α (1 → 6) branches of glycogen are cleaved by another enzyme, glycogen debranching enzyme. 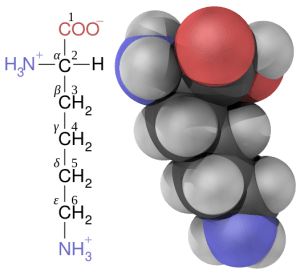 Image: “Lysine with the carbon atoms in the side-chain labeled (left) and a 3D-balls model (right)” by YassineMrabet. License: CC-BY 3.0

Polypeptides, or proteins, are the polymer that results from the linkage of amino acids. There are 20 different naturally occurring amino acids that can be linked together by peptide bonds to form the primary structure of the protein. Peptide bonds are formed through what is essentially the reversal of the hydrolysis reaction and is called a condensation reaction. In this case, the bond is formed with the elimination of a water molecule. The resulting CO-NH linkage is called an amide linkage, or peptide bond. 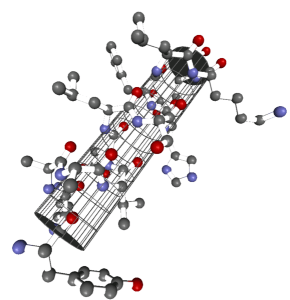 This structure can then form secondary structures such as a α-helix or β-sheet. 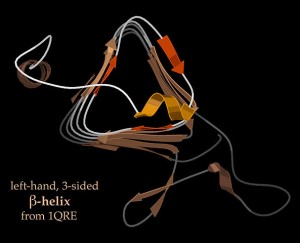 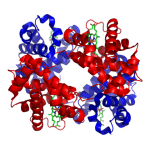 Nucleic acids are the polymers of nucleotides, which are ubiquitous molecules that possess considerable structural diversity.
The four most common nucleotides are: 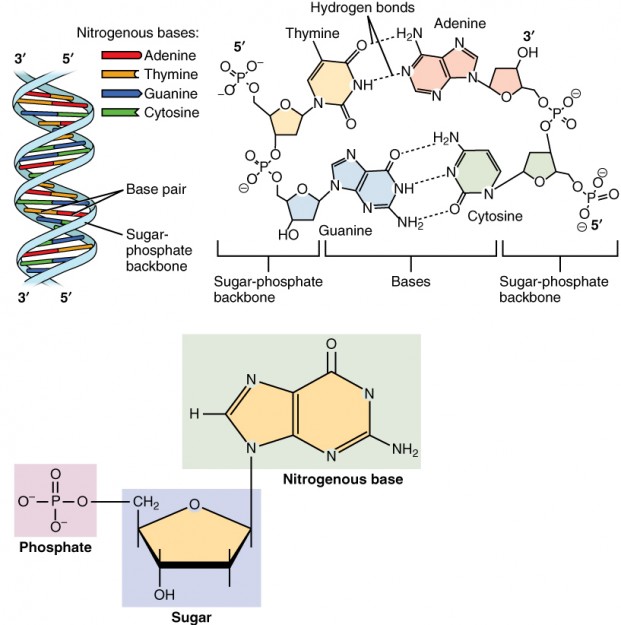 A nucleic acid is formed when the nitrogen atoms (N9 of purines and N1 of pyrimidines) form bonds to a five-carbon sugar, either ribose or deoxyribose. Note that the difference between ribose and deoxyribose is that the sugar is a 2’deoxyribose (i.e. the carbon at position 2’ lacks a hydroxyl group). Additional to the sugar linkage on nucleotides, one or more phosphate atoms are bonded to C3’ or C5’ to form a 3’nucleotide or a 5’-nucleotide, respectively.

The bulk of the nucleotides in any cell are found in their polymer forms, as either DNA or RNA, whose primary function is information storage and transfer. Perhaps the most well-known nucleotide is adenosine triphosphate (ATP), a molecule containing adenine, ribose, and a triphosphate group. This molecule is often called the “energy currency of the cell” because it functions as an energy carrier.

Lipids, or fats, are carboxylic acids with long-chain hydrocarbon side groups, whose physical properties are determined by their length and level of saturation. Fatty acids usually occur in esterified form as major components in the natural compounds, where the most prominent forms arise as the C16 and C18 palmitic, oleic, linoleic, and stearic acids. Most fatty acids have an even number of carbon atoms because they are biosynthesized by the addition of C2 units (acetyl-CoA). 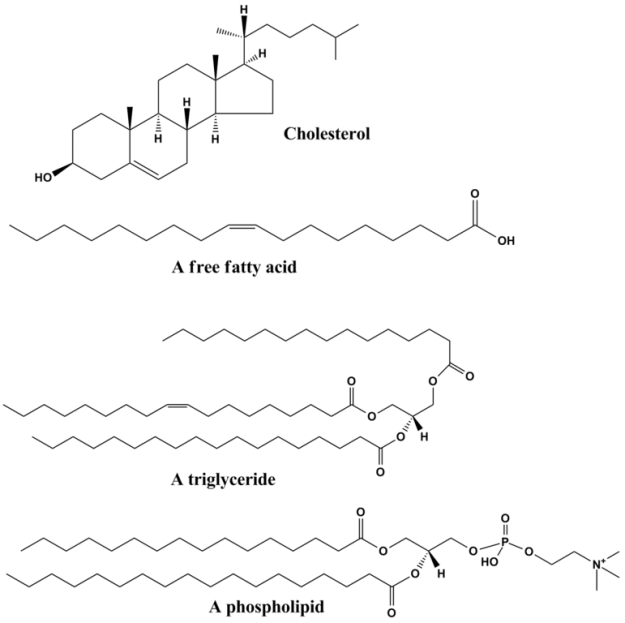 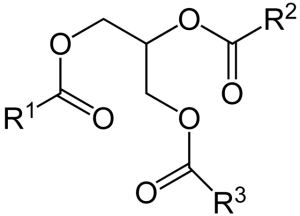 Triacylglycerols function as energy reserves and contain three esterified fatty acids. They are the highly efficient storage form of metabolic energy because they are less oxidized than carbohydrates or proteins. This allows them to yield significantly more energy when they are completely oxidized during cellular respiration. Another reason fats yield more energy production upon oxidation is glycogen binds about twice its weight in water inside the cell, whereas triacylglycerol is stored in its anhydrous form inside of adipocytes.

The consequence of this difference allows for triacylglycerol to provide six times more metabolic energy than an equal weight of hydrated glycogen! 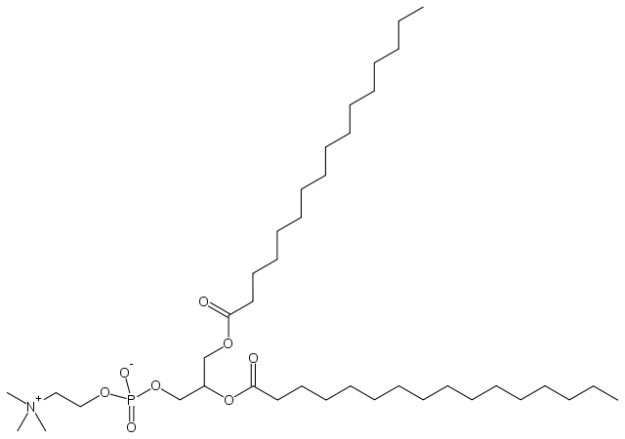 A clinical correlate to glycerophospholipid structure that illustrates a complex lipid is Dipalmitoylphosphatidylcholine (DPPC), which is the major lipid of lung surfactant. It is a protein-lipid mixture that is essential for normal pulmonary function, where it resides on the surfaces of the cells that form the alveoli. Premature-born infants are at risk of developing respiratory distress syndrome, characterized by difficulty breathing due to alveolar collapse. The treatment for this is to pump exogenous surfactant into the baby’s lungs.

Biopolymers can be built from constituent monomers or broken down into constituent monomers through the process of anabolism or catabolism, respectively. Condensation reactions are the chemical process by which two molecules are joined with the loss of water, and is the process by which carbohydrates, proteins, nucleic acids, and proteins are synthesized from simpler subunits. Because water is lost, this process can also be called dehydration synthesis.

Hydrolysis reactions are those in which the addition of water allows for essentially to the opposite process of condensation to occur, thereby cleaving a larger molecule into smaller substituent molecules.