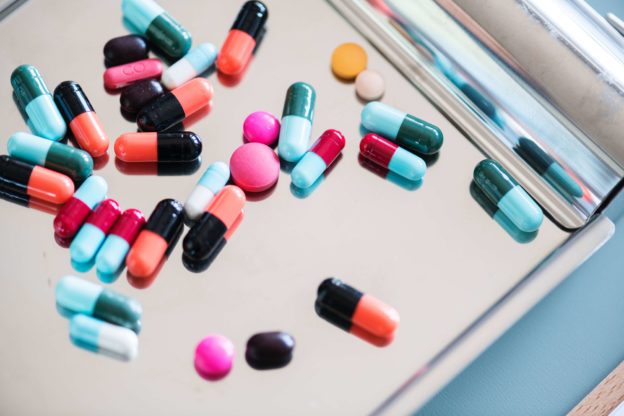 Description of the Action Potential

The heart’s action potential can be divided into five phases (0 to 4), beginning and ending with phase 4. Each channel is responsible for a different phase.

The action potential also varies between the different tissues of the heart—for example, the myocardium, conduction tissue, and impulse centers, such as sinoatrial and atrioventricular (AV) nodes.

Digoxin is an important member of the miscellaneous group, along with adenosine.

In the case of supraventricular tachyarrhythmia, digoxin’s mechanism of action is quite different than when used in heart failure. Digoxin causes direct suppression of conduction through the AV node. This blockage increases the resistance for conduction of the impulse along with the AV node. An increase in vagal tone also occurs. Thus, the refractory period increases and the conduction velocity decreases.

Due to its multiple side effects and narrow therapeutic index, however, other drugs are usually used for both conditions.

The most dangerous manifestation of digoxin toxicity is an arrhythmia. Other presentations include disturbances in the gastrointestinal tract along with neurological signs such as confusion and weakness. Changes in vision may also occur. Unfortunately, digoxin concentration does not always correlate with toxicity.

Treatment with the digoxin-specific antibody is recommended in all patients with clinically significant manifestations of digoxin toxicity. The other treatment option includes atropine, which helps combat the increased vagal tone and raises the heart rate.

The concentration of digoxin in the body increases with the administration of verapamil, quinidine, and amiodarone, as these medications can cause digoxin toxicity. As well, antacids decrease intestinal absorption and thus decrease the efficacy of digoxin.

Adenosine is used in the treatment of paroxysmal supraventricular tachycardia. It decreases conduction along with the AV node and prevents the movement of reentry circuits into the heart. The A1 receptor, along with the G0, is believed to inhibit calcium conduction, which occurs in the conduction tissue.

Adenosine is administered intravenously. Its half-life is brief (< 10 seconds).

Drug efficacy is decreased by caffeine and theophylline products. Its toxic effect is enhanced by carbamazepine, digoxin, and dipyridamole.

As with all antiarrhythmic drugs, there is always a risk of arrhythmias with adenosine administration. Other conditions that may occur include atrial premature contraction, atrial fibrillation, and block. Additionally, there is an increased risk of facial flushing, headache, dizziness, disturbances of the gastrointestinal tract and dyspnea, paresthesia, numbness, and discomfort in the extremities.

There are 2 types of cholinergic receptors: muscarinic and nicotinic. Acetylcholine, which is released from the vagal nerve ending, is responsible for deceleration of the heart, which in turn leads to bradycardia. Bradycardia is itself a significant risk factor for the occurrence of arrhythmia. Atropine acts as a competitive antagonist of acetylcholine at the level of the muscarinic receptors. No effect occurs in the nicotinic receptor.

Side effects include all muscarinic receptor blocker side effects, such as dry mouth and gastrointestinal disturbances.