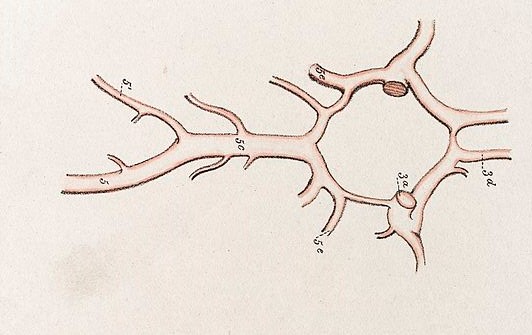 Image : “Arteries at base of brain, ‘Circle of Willis’ ” by Wellcome Images. License: CC BY-SA 4.0 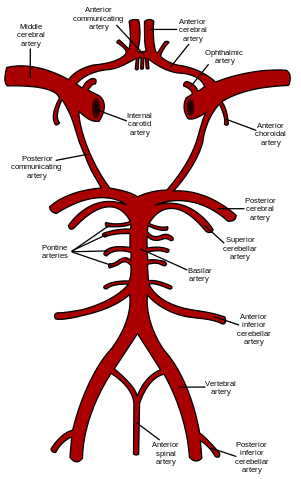 Image: Schematic representation of the circle of Willis, arteries of the brain and brain stem. By Rhcastilhos, License: Public Domain

The anterior cerebral artery is divided into various segments. The first segment starts from the bifurcation of the internal carotid artery (ICA) until the junction of the artery with the anterior communicating artery in the longitudinal fissure.

The middle cerebral artery is divided into 4 segments.

The first segment originates in the internal carotid artery until its bifurcation (or trifurcation).

The middle cerebral artery may bifurcate or trifurcate in different individuals. Branches of the 1st segment include:

This segment originates in the bifurcation of the middle cerebral artery into the circular sulcus of the insula. It extends until the margin of the insula within the Sylvian fissure.

This segment of the middle cerebral artery gives off cortical branches, which supply the frontal, parietal, temporal and occipital lobes. These include: 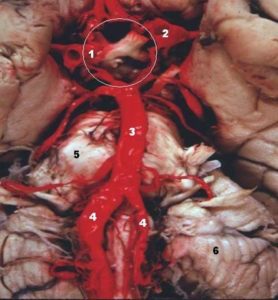 This artery is also divided into 4 segments.

Anterior thalamo-perforators are the vessels that originate in the PCOM artery. The direct perforators supply the thalamus, brainstem and the internal capsule. Circumflex arteries arising from the first segment supply the thalamus and midbrain. The meningeal branch supplies the inferior surface of the tentorium cerebelli.

The third segment, which starts from the posterior aspect of the midbrain till the calcarine fissure, bifurcates terminally into the calcarine artery and the aforementioned parieto-occipital artery.

The superior cerebellar artery originates at the basilar artery immediately before its bifurcation. It also is in close contact with the trigeminal nerve. The branches of this artery supply the tectum, the vermis and the medial aspect of the cerebellar hemisphere. 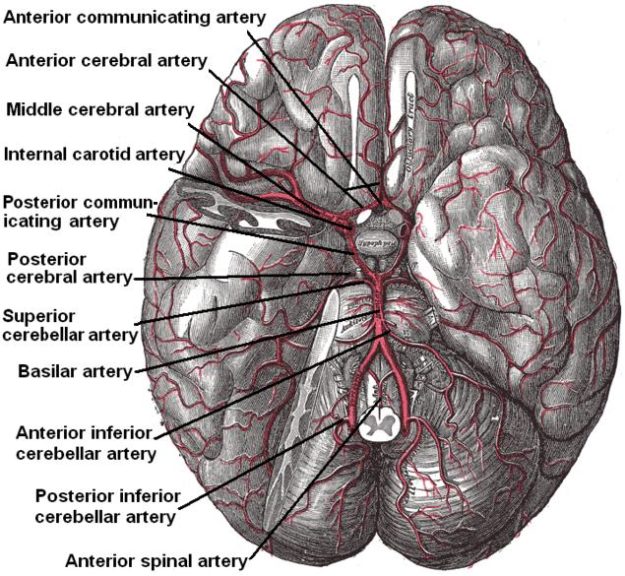 Image: The brain and arteries at the base of the brain. Circle of Willis is formed near the center. The temporal pole of the cerebrum and a portion of the cerebellar hemisphere have been removed on the right side. Inferior aspect (viewed from below). By Wikid77, License: Public Domain