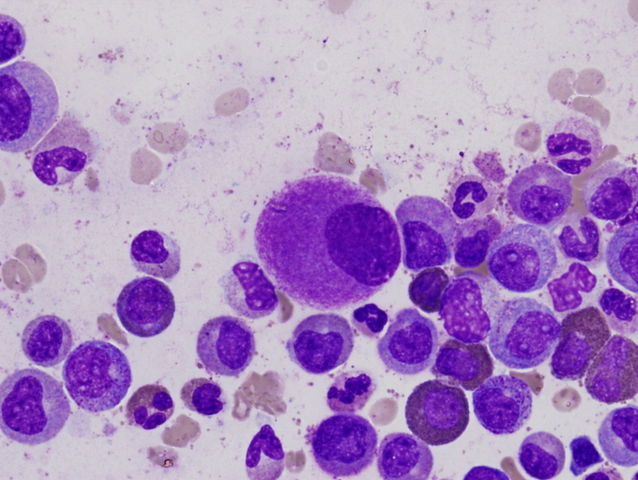 What is chronic myeloid leukemia (CML)?

Background and Classification of Myeloid Neoplasms

CML and other types of leukemia:

The hematopoietic stem cells are present within the bone marrow, derived from the mesoderm, and produce all the blood cells. The stem cells proliferate and divide into 2 blood cell lineages, the myeloid lineage, and the lymphoid lineage. 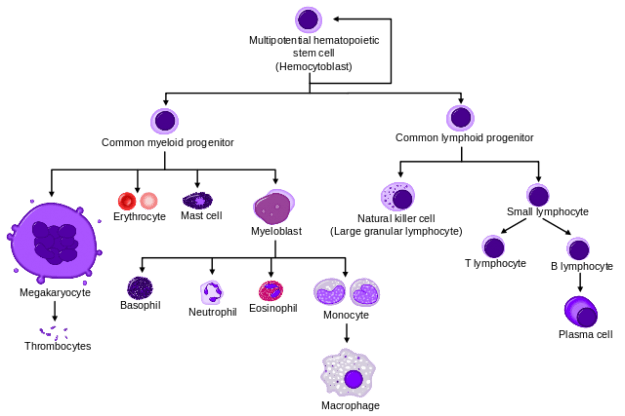 The myeloid neoplasms are derived from the myeloid cell lineage and are divided into 3 general categories:

Acute myeloblastic leukemia (AML): It is an acute proliferation of myeloid cell lineage with a preponderance of the immature (blast) cells within the bone marrow, which are also spilled into the peripheral blood. 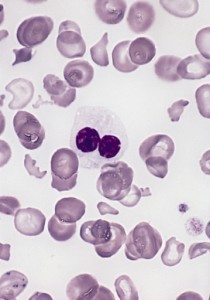 Image: A hypogranular neutrophil with a pseudo-Pelger-Huet nucleus is shown.” by The Armed Forces Institute of Pathology (AFIP), License: Public Domain.

Myelodysplastic Syndrome: It is a pre-leukemic syndrome characterized by abnormal morphology (dysplasia) of myeloid cells. E.g., the granulocytes have decreased intracytoplasmic granules. The neutrophils have only 2-lobed nuclei, called Pelger-Huet cells. The megakaryocytes are dwarfed. The RBCs are large, oval and show ringed sideroblastic iron staining pattern. Because of such abnormal shapes, these cells are destroyed before being released into the peripheral blood circulation, leading to cytopenias and hypercellular bone marrow.

Chronic myeloproliferative disorders: These disorders consist of a chronic proliferation of myeloid cell lineage and are terminally differentiated mature-appearing cells. There is usually an increase in 1 or more types of myeloid cells, such as a predominant increase in RBCs, or platelets, or WBCs. Therefore, they are further subdivided into 4 groups based on a predominantly affected myeloid blood cell.

These 4 disorders are also grouped because they have an increased association with abnormal tyrosine kinases in their pathogenesis. The mutated Janus kinase 2 (JAK-2 kinase) is present in the 1st 3 disorders, while CML is classically associated with the Philadelphia chromosome, which also activates a tyrosine kinase and is discussed later.

CML is common in middle and old age people, accounting for around 20% of all adult leukemia cases. The median age of presentation is 55 years.

In the United States, the incidence is around 1.5 cases per 100,000 inhabitants with approx. 5,500 new cases diagnosed in 2012. The incidence increases with age and is slightly more common in males.

In most of the CML cases, the etiology is not known. The high dose ionizing radiation is considered an important risk factor as an increased incidence of CML was seen in survivors of the Hiroshima and Nagasaki atomic bombs.

CML is classically associated with the presence of an acquired genetic abnormality, BCR-ABL fusion gene. ABL is a proto-oncogene named after Abelson murine leukemia virus, while BCR stands for the breakpoint cluster region. The BCR-ABL fusion gene has tyrosine kinase activity and is responsible for the uncontrolled proliferation of the cells. 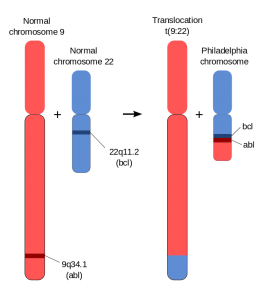 The World Health Organization (WHO) has divided the CML into 3 progressive stages based on the aggressiveness of the disease, response to therapy, and the presence of blasts. These are as follows:

It is the most common indolent clinical phase of CML. This phase is stable and lasts for many years. The myeloid cells are differentiated, with a presence of less than 10% of blast cells. The response to therapy is excellent.

The untreated CML usually progresses to the accelerated phase. The cells multiply aggressively and the blast cells increase in the blood usually between 10–19%. The response to therapy is poor.

The accelerated phase progresses to the blast crisis. This phase is indistinguishable from acute leukemia with blast cells more than 20%. The response to therapy is very poor.

In the early chronic stable phase, CML does not behave like a malignant disease. Quantitatively WBCs are increased, but they are differentiated and mature, and combat the infections. Patients may present with non-specific symptoms of low-grade fever, malaise, night sweats, or abdominal fullness, and early satiety due to an enlarged spleen.

Spleen size roughly correlates with the WBC count and massive splenomegaly corresponds to poor prognosis. Hepatomegaly is also common, but lymphadenopathy is usually not present. In 25% of cases, patients are asymptomatic and CML is diagnosed on routine blood tests or palpable spleen on physical examination.

In the accelerated phase and blast crisis, the patient presents with acute leukemia-like fever, bleeding, petechiae, ecchymosis, and pallor due to over-expansion of bone marrow with the blast cells and ineffective production of platelets and RBCs. The patient may also have bone tenderness and splenomegaly due to extra-medullary hematopoiesis.

Rarely, patients may present with symptoms of leukostasis such as confusion, blurred vision, respiratory distress, thrombosis, headache or priapism, with WBC count usually > 500,000/mcL. It is a medical emergency and should be urgently treated with leukapheresis and judicious hydration.

Laboratory Evaluation and Diagnosis of CML

Complete blood count (CBC) is the initial investigation. It shows an increase in the WBCs, predominantly in the myeloid series. The WBC count ranges from 10,000-600,000/mcL. The cells are mildly left-side shifted with an increase in myelocytes, meta-myelocytes, and pre-myelocytes, but the blast cells are usually less than 10% unless the patient presents with accelerated or blast crisis. Basophils and eosinophils are also elevated. Hematocrit is usually normal with normal RBC morphology. Platelets are usually increased. 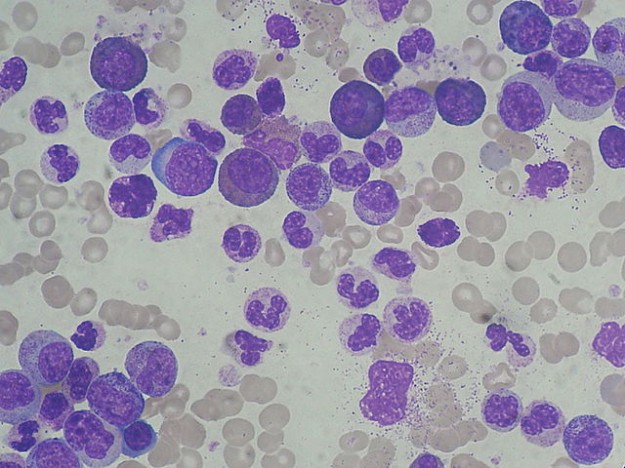 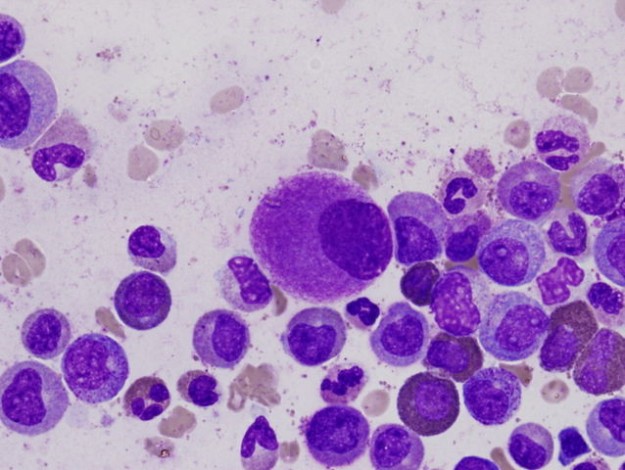 Karyotyping will reveal the presence of Philadelphia chromosome t(9;22). 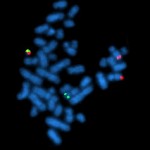 Image: BCR-ABL is detected by FISH. The chromosomes are in blue. The separate red color (on the right) and separate green color (in the middle) on chromosomes show BCR and ABL on their respective chromosomes unfused; but the chromosome that shows the green-red fused color in the upper left corner shows the BCR-ABL gene rearrangement. By Pmx, License: CC BY-SA 3.0

The specific genetic abnormality BCR-ABL will be detected by a polymerase chain reaction (PCR) or by fluorescence in-situ hybridization (FISH) methods.

The characteristic CBC findings with the presence of the Philadelphia chromosome/BCR-ABL fusion gene form the peripheral blood confirm the diagnosis. Bone marrow examination is usually not required. The bone marrow examination can be done in equivocal cases, to look for other chromosomal abnormalities or to assess the prognosis of the disease.

The treatment goals for CML are as follows:

The discovery of specific tyrosine kinase inhibitors, such as imatinib, dasatinib, and nilotinib, has revolutionized the treatment and prognosis of chronic myelogenous leukemia. They inhibit the BCR-ABL specific tyrosine kinase and cause apoptosis of these cells. These drugs are well-tolerated and achieve the hematologic remission of the chronic phase of CML in 95% of cases and complete cytogenetic remission in 76% of cases after 18 months of treatment, but the molecular remission is achieved in only 26% of cases. These drugs also delay the progression of the chronic phase of CML to the accelerated phase and blast crisis, but they should be taken continuously as their discontinuation leads to relapses.

In newly diagnosed CML, the prognostic milestones are set to achieve complete hematologic remission in 3 months and the complete cytogenetic remission in 18 months of treatment. If these are not achieved, the treatment regimen has to be re-assessed.

In an accelerated and blast crisis, there is a much lower response to imatinib and related drugs. In these cases, higher doses of drugs are given and bone marrow transplantation is advised to cure the disease. The supportive therapy with empiric antibiotics, RBCs, and platelet transfusions may also be needed.

The allogeneic bone marrow transplantation (BMT) is the only proven cure for CML. Ideally, it should be offered to all the candidates if a matched donor is found, but the promising results of imatinib and related drugs have limited the BMT to individuals with poor prognosis and treatment resistance.

It is a collection of metabolic derangements that occur during cancer treatment. The rapid killing of leukemic cells releases the intracellular contents into the blood circulation which causes hyperuricemia, hyperkalemia, and hyperphosphatemia, and may lead to fatal acute renal injury.

It should be managed promptly by judicious hydration and allopurinol or rasburicase. Allopurinol is a xanthine oxidase inhibitor that decreases the production of uric acid. Rasburicase converts the insoluble uric acid to soluble allantoin promoting its excretion. Sodium bicarbonate may be used to alkalinize the urine to increase uric acid excretion.

Prognosis and Survival of CML

The prognosis and survival are dependent on several factors and should be made on an individual basis. Generally, the median survival age of CML was around 4 years in the pre-imatinib era. The adequate treatment with imatinib increases the 5-year survival rate of chronic phase CML to more than 90%. Patients with accelerated phase/blast crisis have a very poor outcome and it is the major cause of death with an average survival of less than 1 year.

Some of the poor prognostic factors of CML are as follows:

The CML patients require a long term follow-up for assessing the prognosis, relapses, the treatment side effects and monitoring the overall health, even after the bone marrow transplantation.

The karyotyping is performed every 3–6 months to assess the cytogenetic response by counting the percentage of Philadelphia-chromosome positive cells. As previously discussed, the complete cytogenetic remission is usually achieved after 18 months of treatment. The failure to achieve this leads to the re-assessment of the treatment regimen.

The common side effects of imatinib are nausea, skin rashes, fluid retention, diarrhea, and muscle cramps. The myelosuppression rarely occurs and may require the holding of the drug, if severe.