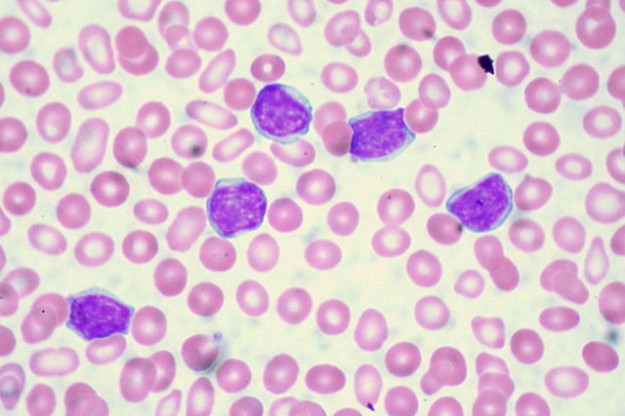 Chronic lymphocytic leukemia: The most common type of leukemia

Chronic lymphocytic leukemia (CLL) is the most common type of leukemia and belongs, being a leukemic B cell-lymphoma, to the group of low-grade, indolent non-Hodgkin’s lymphomas. Clonal proliferation of the usually non-immunocompetent B cells induces accumulation in the bone marrow, the spleen, and lymph nodes, and causes leukocytosis in the peripheral blood.

The disease usually manifests at an older age and symptom progression is slow, so that initially a therapy often may be disclaimed.

The incidence of CLL is 4 per 100,000/year. The onset of the disease shows an increasing incidence in older age groups. The mean age at the point of diagnosis is about 70 years and men are affected more often than women.

The exact etiology of CLL is unknown. In addition to age, another known risk factor is a positive family history. Furthermore, organic solvents may also be a trigger.

The role of B lymphocytes in the development of CLL 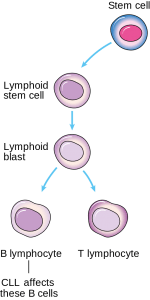 CLL is based on an uncontrolled proliferation of mature B lymphocytes. Generally, this population of B lymphocytes is monoclonal, which means that it is composed of identical copies of a single B lymphocyte.

Moreover, in the case of CLL, all cells appear mature, small, and in good order, but they do not fulfill an immunologic function. If these B cell lymphoma cells reach the peripheral blood, it is called a leukemic washout.

If the clonal B cells are limited to a lymph node area, it is called small cell lymphocytic lymphoma if they consist of the same type of cells.

In the course of the disease, the proliferating population of lymphoma cells also further increases in the bone marrow and extrudes other cell types, which explains the lack of erythrocytes (anemia), thrombocytes (thrombocytopenia), and functioning B lymphocytes (antibody deficiency syndrome).

CLL is a common incidental finding

CLL is often an incidental finding in the investigation of leukocytosis; thus, almost 50% of the patients are free of symptoms at the point of diagnosis.

Early signs are general symptoms such as fatigue, tiredness, and lowered performance. Early signs also include b symptoms: the triad of night sweats, fever of unknown origin (FUO), and unintended loss of weight.

In the further course of CLL, a majority of the patients develop an enlargement of lymph nodes, lymphadenopathy that typically has a dense consistency and is indolent. Moreover, an enlarged spleen (splenomegaly) or liver (hepatomegaly) is found quite often.

CLL can also become apparent on the skin in the form of pruritus, chronic urticaria, mycosis, and herpes zoster. Such dermatologic symptoms in older patients should always be indicative of possible CLL. The rare Mikulicz syndrome in CLL patients denotes a swelling of the parotid gland and the lacrimal gland.

A common and dangerous complication is antibody deficiency syndrome. In this condition, clonal CLL cells displace the functional B cell population and increase the risk of infections significantly. The reduced number of granulocytes (neutropenia) makes the patient prone to bacterial infections. This is a major cause of the death with this type of leukemia.

Other complications are autoimmune hemolytic anemia (AIHA), autoimmune thrombocytopenia, and a secondary transition into a highly malignant lymphoma. The last phenomenon is called Richter’s transformation, which has a worse prognosis than CLL. 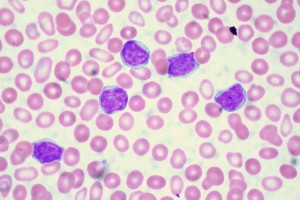 In the diagnostic investigation of CLL, the first suspicion often occurs through an accidental finding of leukocytosis. In the subsequent differential blood count, there is typically an increased percentage of lymphocytes found, usually between 70–95%.

In blood smears of patients with CLL, often Gumprecht shadows are found. These shadows come from the destroyed leukocytes. These, however, are to a lesser extent specific, and also appear in long-stored blood samples, which creates low confidence in a positive diagnosis.

Bone marrow cytology is not necessarily required for the diagnosis but can support a suspicion of CLL in cases with a percentage of 30% or more mature lymphocytes among all nucleated cells.

The mature lymphocytes of CLL are analyzed by using flow cytometry for their immunophenotype. The expression of the B-CLL surface proteins CD19, CD20, and CD23 with simultaneous expression of the T cell antigen CD5 is characteristic of a leukemic population of lymphocytes.

The clonally proliferated B cells can also account for the often diagnosed light chain restriction of either kappa or lambda light chains.

To ensure a correct diagnosis, the following criteria of the International Workshop of Chronic Lymphocytic Leukemia (IWCLL) from 2008 must be fulfilled:

Note: If there are symptoms and less than 5,000 B lymphocytes/µL in the peripheral blood, it is called monoclonal B cell lymphocytosis (MBL), which can proceed into CLL. Patients with MBL are examined periodically, because this may provide decisive predictions about their prognosis. Over 80% of the patients present with genetic transformations in the analysis. One of the most common mutations is a deletion 13q14 and comes with a good prognosis. However, patients with the deletion 17p13 are usually hit decisively harder.

In the later course of the disease, the consequences of the expulsion caused by clonal B cells can be observed. The lack of healthy B lymphocytes induces an antibody deficiency in the serum; an expulsion in the bone marrow can result in detectable anemia or thrombocytopenia. 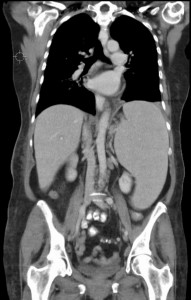 For staging the disease, a few other examinations are required. Splenomegaly or hepatomegaly can be detected with the aid of sonography.

Clinical examination of lymph nodes is extremely important. If a leukemic manifestation is not found, as it is in the case of small cell lymphocytic lymphoma whose cytology is identical to CLL, a biopsy of enlarged lymph nodes might be indicated. It is also performed to rule out Richter’s transformation.

Note: Small cell lymphocytic lymphoma is the same as CLL but without a leukemic washout into the peripheral blood.

If all results are available, the disease is classified into clinical stages by either the Binet or the Rai staging system to evaluate the prognosis and the best possible therapy. Both  staging systems are still in clinical use. 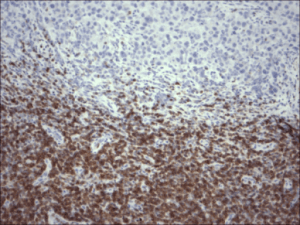 Image: Restricted expression of Bcl-2 within the lymphocytes in chronic lymphocytic leukemia in contrast to malignant melanoma cells. By Openi. License: CC BY 2.0.

The most important differential diagnosis, including relevant lymphocytosis, is the MBL, which seems similar to the phenotype of CLL in over 80% of the cases with several lymphocytes of less than 5,000/µL.

Moreover, other lymphomas that can present with leukemic progression, i.e. mantle cell lymphoma, must be kept in mind. Chronic myeloid leukemia (CML) should be ruled out with cytogenetic examinations. Regions of enlarged lymph nodes should be examined histologically for clarification of other possible causes.

There is a curative therapy for CLL other than allogeneic stem cell transplantation. The disease progresses slowly, so therapy often is not necessary upon diagnosis (watch and wait). Therapy is based on the following:

Changes in the therapy of CLL

The past years have brought tremendous changes in the therapy of CLL. There is an increasing number of options available that complement conventional chemotherapy or even replace it. Generally, an indication for therapy is aligned with symptomatology, so that lymphocytosis alone does not necessitate medical treatment. However, this dogma also could be challenged by the application of early therapy that is free from chemotherapeutic substances (stage Binet A). 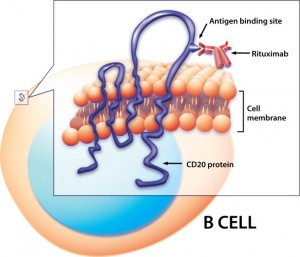 Image: Computer-generated illustration of rituximab binding to CD20 protein on a B cell. By NIAID. License: CC BY 2.0.

As first-line therapy, the FCR regimen is applied with patients in good general condition, especially young patients. Thereby, fludarabine (a purine analog) is combined with cyclophosphamide (an alkylating agent), and rituximab (a CD20 antibody).

Studies have demonstrated that new generations of CD20 antibodies such as ofatumumab and especially obinutuzumab yield better results after treatment.

The CD52 antibody alemtuzumab is used in a subgroup of CLL that has a poor prognosis due to a deletion 17p13; sensitivity to chemotherapeutics is generally worse in this deletion and the antibody therapy has been proven to provide better results in terms of progression-free survival (PFS).

Patients with a reduced general condition or organic dysfunctions are primarily treated with chlorambucil or bendamustine. Both substances are alkylating agents with fewer side effects such as granulocytosis or thrombocytopenia. Bendamustine is also combined with rituximab according to the BR regimen.

Relapse therapy, the therapy of choice, is more variable. Relapse after 2 years is often treated by repeating first-line therapy. Depending on the patient’s condition and the genetic and immuno-phenotypical type of CLL, alternative types of therapies are planned.

Newer substances include Bruton’s tyrosine kinase (BTK) inhibitor ibrutinib and the PI3 kinase inhibitor idelalisib. The CD52 antibody alemtuzumab is also used for monotherapy. New future approaches could be explored by blocking the BCL-2 protein, considering that the corresponding substance ABT-199 has yielded promising results in clinical trials.

Furthermore, in cases of therapy-refractory CLL or high-risk patients, allogeneic stem cell transplantation may be considered; however, this is associated with a high mortality risk.

Additional therapeutic measures include demand-actuated treatments, which correspond to the progression of the disease. Immunosuppressed CLL patients should receive periodic vaccination to prevent infections with influenza or pneumococci. Antibody deficiency can be treated by substituting immunoglobulins.

Progression and Prognosis of CLL

Cytogenetics as progress-determining factor in CLL

The prognosis of diagnosed CLL significantly depends on the stage of the disease and cytogenetics. Progress can be at a minimum level for years to maintain a lifelong ‘watch-and-wait’ strategy. Likewise, aggressive forms of CLL can progress rather quickly. The median survival of patients diagnosed with stage Binet A is greater than 10 years, while those diagnosed with stage Binet C have a median survival of fewer than 3 years.